Appeal for information following series of robberies at bookmakers 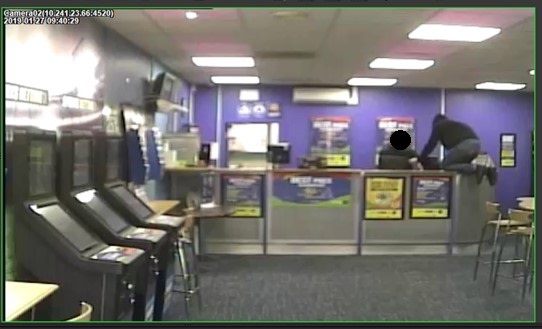 Detectives have released CCTV of the moment a man brandishing a knife robbed a book makers in in Chandlers Ford.

The incident happened at 9.40am on Sunday, 27 January when a masked man, carrying a red coloured knife, entered Corals on Oakmount Road. He jumped onto the counter and demanded cash.

A member of staff handed over approximately £500 and the offender made off.

The man police want to speak to is described as: Around 5ft 9ins and wearing a black hooded top with the hood up. He had a black scarf or snood with no eye or mouth holes covering his face and he was wearing black gloves.

This incident is being linked to four other incidents which have occurred in recent weeks.

At around 8.10pm on 13 January a man entered Corals in Bitterne Road Precinct and threatened staff with a knife. Staff handed over a quantity of cash and the man made off.

At around 8.10pm on 14 January a man entered Betfred on The Hundred, Romsey armed with a knife. He jumped over the counter and demanded money. A quantity of cash was handed over and he made off.

At around 5.10pm on 20 January a man entered Ladbrokes on Long Lane, Holbury. He had a knife in his hand. He jumped over the counter and demanded the staff member open the safe. He made off with a quantity of cash.

At around 8.10pm on 23 January a man entered Betfred on Upper Northam Road, Hedge-End armed with a knife. He demanded money and made off with cash.

Detective Constable Alison Humby, said: “We’re appealing for information to help identify a man involved in a series of betting shop robberies which have occurred in Southampton and surrounding areas since mid January 2019.

“On each occasion the offender has been carrying a knife and entered the betting shop either close to closing time or when the shop opens. In all incidents he has made off with quantities of cash.

“The offender has disguised himself very well, as you can see from the CCTV. However, we’ve issued the images to demonstrate the severity of what has happened. The offender has used a distinctive red knife which is visible in the CCTV. Do you know anyone that owns a knife like this? Have recently acquired a large amount of cash?

“We’ve been engaging with the bookmakers’ head offices and have spoken with them at length offering them advice and information. They have ensured that their staff have been fully briefed about what to do and how to keep safe if they find themselves in this type of situation.

“We’d like to speak to anyone who has any information about these incidents or anyone who thinks they recognise the man in the CCTV image.”

If you have any information, please contact us on 101, quoting reference number