The front carriage of a new Azuma train has arrived at Newcastle’s Discovery Museum as part of the Great Exhibition of the North (22 June – 9 September). The new train, set to carry passengers later this year on the East Coast Main Line, will be parked outside on the museum’s Plaza until 2nd July.

The new fleet is being built at Hitachi’s Newton Aycliffe factory in County Durham. The factory, home to 1000 employees including 50 apprentices, opened in 2015.

Azuma is due to begin carrying passengers later this year along the East Coast Main Line, connecting the North East to Scotland and London. Passengers can expect modern trains offering more seats and space, as well as shorter journey times.

On Sunday 24th June, operation of East Coast Main Line services will transition to London North Eastern Railway (LNER) from Virgin Trains East Coast. LNER will then run all services from London to Yorkshire, the North-East and Scotland.

Hitachi has designed the trains using their Japanese bullet train technology, with the front of the train using a sleek aerodynamic design. With faster acceleration rates passengers can expect their journey times to be cut once the fleet is introduced. The name Azuma means “east” in Japanese, an acknowledgement of Hitachi’s roots and Japan’s advanced railways.

Old vs new as Stephenson’s Rocket returns to Newcastle

Last week Discovery Museum received Stephenson’s iconic Rocket locomotive which was built in Newcastle in 1829. This is the first time that Rocket has returned to its birth-place since it was presented to the nation 156 years ago.

Visitors will be able to compare two North East built trains as the region celebrates its railway heritage and future. 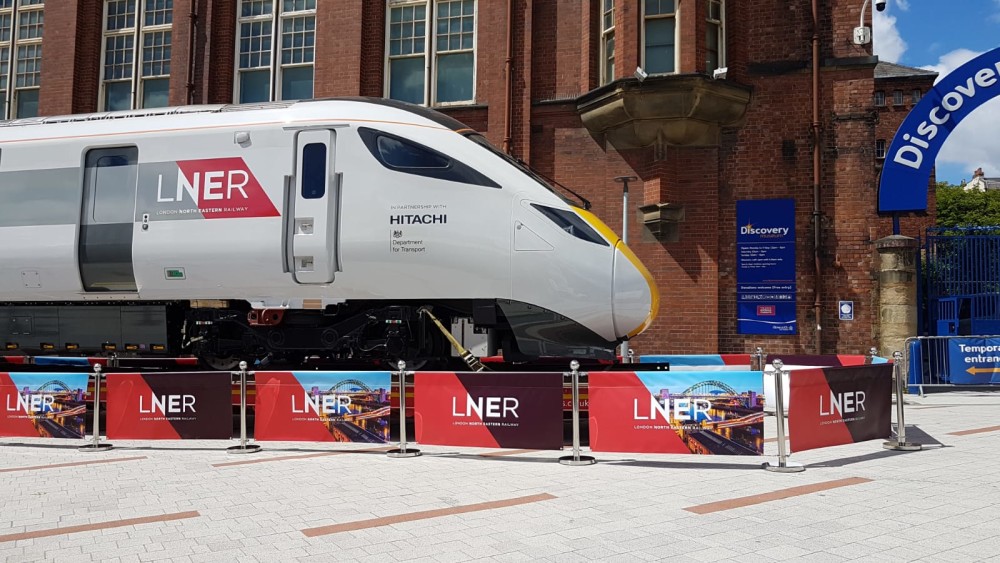 “This symbolic moment celebrates a new chapter in the North East’s proud railway history. Later this year passengers will start to enjoy our Azuma trains, harnessing Japanese bullet train technology and built by a proud workforce in the North East”

“This summer thousands of visitors will be able to get up-close to one of Britain’s (if not the world’s) most famous feats of engineering, that was made right here in Newcastle. It’s Rocket Science, which features Stephenson’s Rocket and accompanying exhibition will share how this historic engine’s ground-breaking design heralded the birth of passenger railways and celebrates the North’s world-famous industrial heritage and innovative spirit, which is still thriving today thanks to North East companies like Hitachi.”

“LNER is absolutely committed to ensuring a successful transition for our customers, employees, station staff and everyone else who depends on the train services we operate.

“Once the transition to LNER has been managed successfully, we will continue to invest and develop the East Coast for the benefit of customers. As part of this commitment, LNER is taking on the Azuma project from Virgin East Coast. These Azuma trains will mean more services on the line and more capacity for customers. LNER is delighted to be part of the preview of the new Hitachi Azuma trains which will be entering service across the line later this year.”

Great Exhibition of the North is an 80-day Exhibition, which takes place between 22 June and 9 September 2018 across NewcastleGateshead, celebrating great art and culture, design and innovation from across the North. www.getnorth2018.com

Having delivered the hugely popular Javelin HS1 fleet in advance of the 2012 London Games, Hitachi is delivering major orders for new trains, with 281 due to be in service by 2021. The first wave of new trains is being made at our purpose-built factory in County Durham and entered passenger service in 2017 as part of the UK Government’s £5.7bn Intercity Express Programme. With a proud reputation for innovation, Hitachi is at the forefront of using new digital technology to enhance passenger experience and enrich Britain’s railway’s heritage. Hitachi rail is growing rapidly, employing over 2,000 people and soon to be operational at 15 locations across the UK.

For more information about the company, please visit: www.Hitachirail-eu.com