From New York in United States to London, UK the Art of the Portuguese Artist Santiago Ribeiro

London, 14/01/2019 - The art of the Portuguese artist Santiago Ribeiro will be for the first time in British lands more precisely in the city of London. And as the promoter and creator of the world largest 21st century surrealist art exhibition, the International Surrealism Now, he takes now the show to the city of Marinha Grande in Portugal at Vieira de Leiria Gallery becoming the 13th edition since its creation in 2010 with the largest show organized by the Bissaya Barreto Foundation. Meanwhile the exhibition Surrealism Now is open to the public at the House of Culture of Coimbra in Portugal until January 19, 2019

To the United Kingdom he was invited by the Parallax Art Fair manager, Mr Tom Moore, to exhibit at Chelsea Town Hall in London. 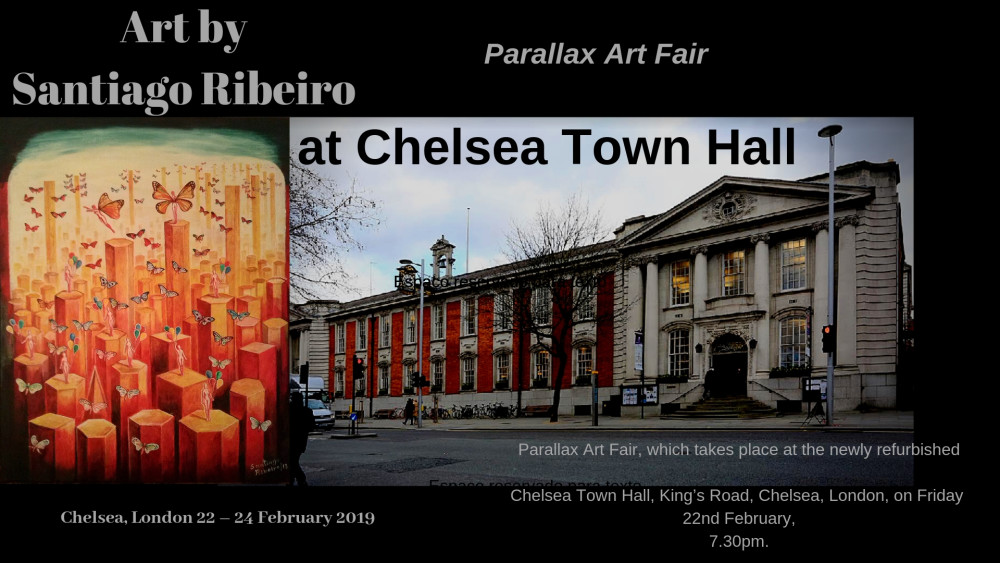 PAF developed from an international exhibition called “Parallax” in 2009. Although independent, it still forms an investigative research process, which makes it unique in terms of open exhibitions and fairs designed for exhibitors and designers. Practically, PAF is a new kind of event and different from a dealer fair that many exhibitors may have experienced. One of its aims is to encourage exhibitors and designers to think about their business role.

Below is the painting "Butterflies" arrived a few time ago from China Taiwan where was selected to be on Get Art Museum at Art Revolution Taipei will go now to be exhibit in London.

Note: The renowned cultural magazine, The Culture Trip, named 10 Portuguese artists as the most internationally recognized at the present time and Santiago Ribeiro it is one of them.

Also after an impressive multimedia show on the giant screens of Times Square in New York Ribeiro's work has been featured at the U.S. Embassy in Lisbon, in the Portuguese American Journal , in Digital Meets Culture , Pressenza fr , metroNews.ru , Pravda in Portuguese , The Herald News , ARTVOICE , Associated Press , EFE, APA ots, AAP , Reuters , ANA , News Aktuell and many other publications...

The 13th edition of the International Surrealism Now exhibition 2019 in the city of Marinha Grande in Portugal has at the moment the participation of 120 artists from 50 countries in the five continents.

, dedicated to promoting Surrealism of the 21st century, through exhibitions presented over the

International Surrealism Now of the 21st century presents a strong force for freedom of creativity, love and hope. This can be see in the works of the personal visions of 120 of the world’s leading surrealism artists representing the hopes, dreams and idealogies of 50 countries proposing new perspectives, solutions and healing journeys

Showcasing the dreams of creative and ideological freedom, the modern day internet allows us

to bring you the vital works of these astounding 21st century surealist artists..