Got it!
Carl Russell

Police appeal on first anniversary of murder of Carl Russell

Detectives investigating the murder of Carl Russell are continuing to appeal for information on the first anniversary of his death, Monday 7 October.

Carl was just 27 years old when he was fatally shot in Cornwood Close in Belle Vale on 7 October 2018 and an extensive investigation is ongoing by specialist detectives from the Major Crime Unit.

To date, two men – aged 30 and 34 from Belle Vale – have been arrested on suspicion of murder and released on conditional bail in connection with the incident.

Detective Chief Inspector Mark Baker said: "The family and friends of Carl Russell have endured the hardest 12 months of their lives since his brutal murder.

"No family should have to go through the pain of losing a loved one in this way, especially at such a young age, and we are doing everything we can to make sure the person or people responsible are brought to justice." 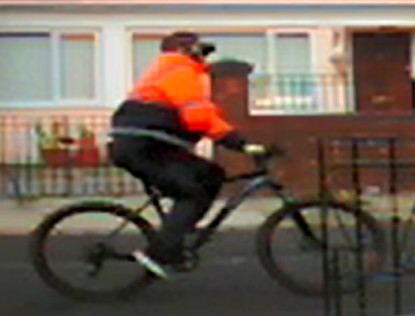 DCI Baker added: "We are asking people to take a look at this image of a man in a high vis jacket on a bicycle and consider if you know who it is, as we believe he could have vital information that could assist this investigation.

"We want any potential witnesses to cast their minds back to that day, Sunday 7 October 2018, and consider if they might have seen anything suspicious.

"In the months since you may even have heard people taking about the incident, or people they believe may have been responsible. In that time, allegiances may have changed and we are appealing directly to anyone with any information to contact us or Crimestoppers, even if you chose not to come forward at the time."

DCI Baker added: "A year after Carl was murdered, we continue to devote significant resources in an effort to find out what happened, and bringing the offender to justice.

"We have made progress in that time, including the arrest of two men, who have been released while our enquiries continue as we try to piece together what happened and who killed Carl."

If you know who the man pictured could be, or have any information about the murder, you can direct message the Merseyside Police social media desk via Twitter @MerPolCC or Facebook Merseyside Police CC. You can also call 101 quoting incident reference 18200211417 or contact the independent charity Crimestoppers anonymously, on 0800 555 111 or via their online form at: https://crimestoppers-uk.org/give-information/give-information.