Detectives investigating an armed robbery in Birkenhead on Saturday 28th September are issuing CCTV images in connection with the offence.

At 11.20am, officers were called to Asda on Stanley Road to reports of two men entering the premises, one of whom was reportedly in possession of a machete, and stole cash from within.
The offenders are believed to have left on a motorbike and travelled towards Birkenhead town centre. No staff were injured, although they were left shaken.

Following enquiries, a 35-year-old man from Prenton was arrested on suspicion of conspiracy to commit robbery. He was taken to a police station for questioning and has now been released under investigation.

D/Sgt Clint Wilkinson said: “Our investigation continues and we still want to hear from any witnesses or anyone who saw the bike or person wearing the distinctive helmet pictured around the time of the offence, or has seen either since. Your information or footage could be the key to identifying those responsible.

“We understand the quality of the picture of the bike is not great, however it is described as having yellow wheels, and as such, again looks quiet distinctive. Likewise, the helmet pictured would be recognisable to anyone who knows the owner. We need to find both, and anyone who knows who was involved or is storing any items.”

Anyone with information who has yet to come forward is asked to contact @MerPolCC or Crimestoppers anonymously on 0800 555 111 with reference 19100560299. 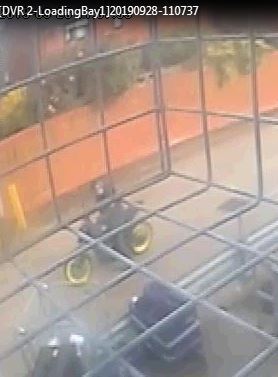