At lunchtime on Wednesday 30 October, site attendant George Burgess noticed two unusual metal boxes in one of the recycling sheds where the public usually put small electrical items for processing.

There were several wires hanging out of one of the boxes so his colleague Jim Durkin gingerly checked the contents.

Jim’s family background is in open-cast mining, and as soon as he carefully opened the boxes he knew he was looking at explosive detonators. One box had approximately 60 of these volatile charges in bundles of 12, the other had a small hand plunger used to set them off and detonator cords to connect them.

Jim, 51, said: “These are very sensitive, small but powerful explosives that require a tiny electric current – or a spark – to set them off. If these had been processed as usual the people handling them further down the processing line could easily set them off, with devastating consequences.

“Even if they’d ended up in landfill, the machinery involved there would have easily triggered an explosion.”

The Recycling Centre was immediately closed to the public until the detonators were removed and safely disposed of by the bomb squad.

The council’s waste manager, Mike Neary, praised the quick action by his two colleagues. “The team has no doubt has seen many strange things being put to the recycling centre,” he said.

“So when they think there is something odd about an item, we take notice.

“We are so lucky to have such experienced people on the ground like Jim and George, I’ve no doubt they averted a potential tragedy further down the waste process.”

There is no information as to who left the boxes for recycling, but them contents were of some vintage and are most likely to have been leftover from nearby quarrying sites.

The contents of the boxes were later destroyed by the Bomb Disposal Unit in a controlled explosion off site. 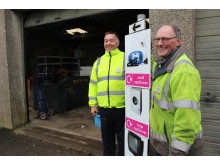