Roads in Moray were open today following last night’s snowfall which resulted in difficult conditions for some drivers. Although all routes were passable, motorists were urged to take extra care because of slush and surface water left over from yesterday’s snowstorm.

A Moray Council spokesman said the council’s fleet of 18 gritters were out ploughing and gritting roads across Moray during yesterday evening and were mobilised again early this morning, although milder conditions had seen much of the snow disappear overnight.

To plan its gritting schedule the council relies on forecasts from the Met Office, and data from road sensors along Moray’s 1,600 km of carriageway. Met Office predicted a light snowfall for Moray yesterday evening, which turned out not to be the case. They have since accepted their forecast was inaccurate. Here’s a copy of the forecast: 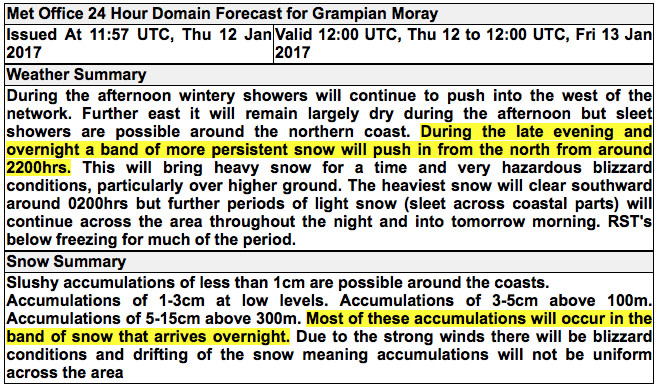 “A number of the council’s gritters were deployed throughout yesterday and in the afternoon around Elgin.

“Unfortunately it also coincided with people leaving work for home and the conditions made the teatime commute  difficult for many. The long tailbacks developed on many stretches of trunk road which led to many of our gritter lorries getting caught up in slow-moving traffic, where they have no option but simply to go with the flow.”

A spokesman added: “Once roads are gridlocked the Council also has the same problems of getting gritter drivers back to the depot and then get the gritters travelling along the roads. Last evening gritter drivers in Elgin once they arrived in the depots, were being instructed to commence treatment as soon as possible with maximum salting treatment, but travel around Elgin was very slow at that time. One gritter driver being stuck in a queue of very slow eastbound traffic on the A96 actually parked up his vehicle and walked in to drive his gritter.”

Treatment of the A96 and Sections of the A95 are the responsibility of BEAR Scotland. BEAR has 94 vehicles involved in snow clearance on the 2,448km of trunk roads, Moray Council has 18 gritters covering 1,600 km

“Gritting a road is not a guarantee that roads will be snow or ice free at all times. Last night is an example of snow falling on roads which had received salt treatment, but if the rate of snow falling exceeds the rate that the salt helps to melt the snowfall then snow will accumulate leading to compacted ice being the surface that motorists tyres are in contact with. These events are beyond the control of any road authority and events like that experienced in Elgin yesterday evening could happen on any road in the country at any time during the winter.”

Moray Council area stretches from Tomintoul in the south to the shores of the Moray Firth, from Keith in the east to Forres in the west. The council and its 4,500 employees respond to the needs of 95,510 residents in this beautiful part of Scotland, which nestles between Aberdeenshire and the Highlands.

Famous for its colony of dolphins, fabulous beaches and more malt whisky distilleries than any where else in Scotland, Moray is a thriving area and a great place to live.

Headquartered in  Elgin, the administrative capital of Moray.