The start of the new school year means changes for staff as well as children joining nursery.

Moray Council has filled over 40 early years posts since January with the majority starting in their new setting at the start of the August term. This recruitment has been a combination of new entrants to the sector, staff moving on from other settings and existing staff taking advantage of career progression opportunities.

The staffing increase is a result of the early learning and childcare (ELC) expansion of hours, now into phase two, with almost 1,000 children in Moray receiving the new entitlement of 1,140 funded hours in nursery or with a childminder.

A further round of recruitment is expected in spring 2020 to ensure appropriate staffing levels ahead of the full roll out of the extended hours in August 2020.

A further nine local authority nurseries have also come under the leadership of a Nursery Manager following on from the pilot phase in 2018.

One Manager who has taken the opportunity for career progression is Mitch Fraser, who was previously Senior Nursery Nurse at Tomintoul Primary School Nursery, and is now Nursery Manager at Tomintoul and Keith Nurseries: “The expansion has been great for me - I would never have had the opportunity to step up without it. It will be great for all early years staff giving them a chance to progress with their career.”

Chair of the Children and Young People’s Services Committee, Cllr Sonya Warren, says the new staff are a “welcome addition”: “We expected the expansion of early learning and childcare funded hours would bring recruitment challenges, however we’ve had consistently high quality applications with over 200 applications for 10 posts in Spring 2019. We now know that we have an enthusiastic workforce making the most of the opportunities open to them and they’re a welcome addition to any funded provider early years team.” 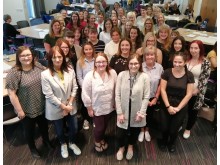