The Moray charity devoted to funding defibrillators in the area’s public places is now delivering CPR training in schools.

Keiran’s Legacy, which was set up by Gordon and Sandra McKandie following the death of their son in 2016, made the announcement at Elgin Academy where Keiran was a pupil.

Moray Council made a commitment to the British Heart Foundation Scotland (BHF) earlier this year to deliver CPR training to all children and young people in Moray’s schools. Keiran’s Legacy will now be providing this, and BHF Scotland is also providing free training kits for classrooms to use in lessons. Other equipment supporting the training has been funded by the Gordon & Ena Baxter Foundation and Keiran’s Legacy.

The move means every secondary school pupil will be trained in CPR before they leave school.

Keiran McKandie, from Miltonduff, was 16 when he died following a collision with a car while out cycling in March 2016. Since then his family have devoted themselves to funding defibrillators across the north-east and raising awareness of CPR and defibrillation skills.

Keiran’s mum, Sandra McKandie, made the announcement at a head teacher’s meeting held at Elgin Academy, and handed over the manikins and training defibrillators which will then be distributed to all Moray secondary schools.

She said: “As a charity Keiran’s Legacy is committed to working across schools, communities and businesses in Moray to ensure that everyone has an enhanced chance of survival.

“Keiran’s accident demonstrated that there is a lack of knowledge and fear regarding helping someone in the event of a life-threatening situation.

“The education of young people will reduce this inability to act and become part of their normal learning.

“Keiran’s Legacy will continue to demand change for the benefit of all and to reduce the chance of other families suffering the torment of their loved one not coming home after a sudden out-of-hospital event.

“The charity is not only providing CPR training but the use of a defibrillator to all Moray secondary schools – and we aim to achieve this across all regions.”

The BHF launched a campaign last year to urge every region to ensure students know the skill to create a ‘nation of lifesavers’.

It is estimated that 3,500 out-of-hospital cardiac arrests happen every year in Scotland with survival reducing by 10% for every minute that passes before help arrives.

He said: “Far too many lives are lost in this country when people suffer a cardiac arrest out of hospital, partly because too few bystanders have the expertise or confidence to perform CPR.

“Training youngsters in school will help change this.” 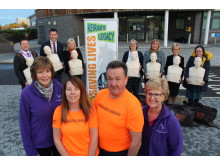