Justine Hird was one of our neighbours. She and partner Steve Kinnaird and their two young daughters, Thea and Elsa, had moved into our street a couple of years before. Justine, no matter how busy, always had time for a chat and a smile. It was such a shock to hear that she had been rushed to hospital after suffering a massive stroke from which she never recovered. She was only 46, fit and apparently very healthy, when she passed away on 10 December 2017.

Since then Steve has a done an amazing job in re-configuring family life without the person who was at the very centre of it all, Justine, and in his own quiet and unassuming way he has made us all aware of the qualities of care and compassion that made her so special to so many. It was very much with that in mind that ‘Team Justine’ was created. It was a way of celebrating Justine’s life, supporting Steve and his family and also raising awareness that strokes don’t just happen to older people.

The route from George Square up the hill of St Vincent St was a sharp reminder that all our training would be put to good use. But it soon became apparent that our ‘Team Justine’ and purple Stroke Association running vests were attracting lots of attention and support from the throngs of supporters along the route. Wherever possible we tried to run in order so that we could spell out the letters of Justine’s name on the back of our vests. Sometimes it worked and one generous American runner offered to take our picture as we were about to head up onto the Kingston Bridge a couple of miles into the race. At other times, the letter sequence was broken prompting one Glasgow wag’s suggestion that maybe we should also be running for the Dyslexia Association! 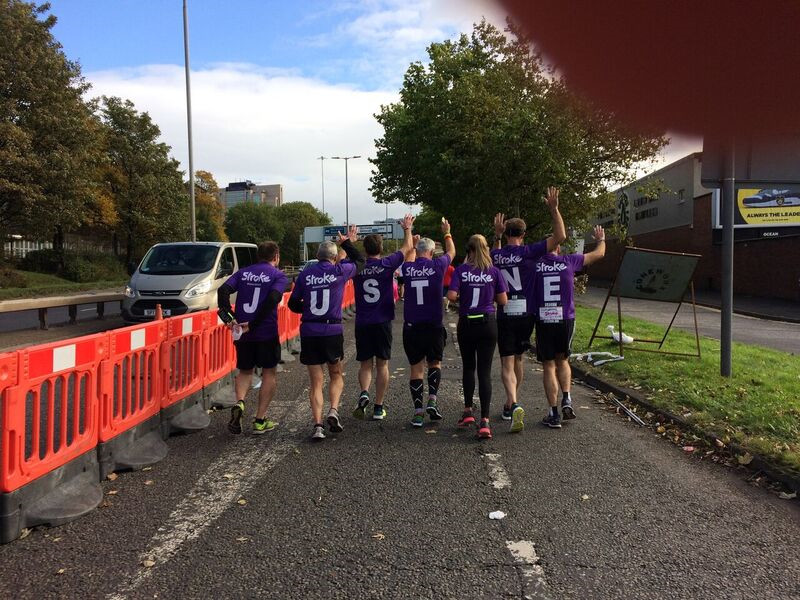 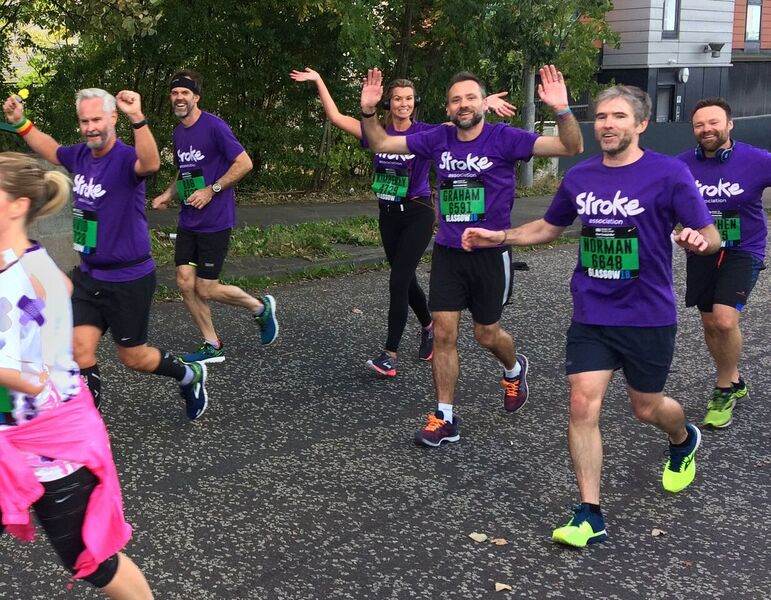 Our spirits were lifted even further when we approached Maxwell Park where we knew we would be cheered on by Steve’s daughters, Thea and Elsa and their friends, Justine’s mum, Sheila, her sister Stephanie and her children, Zach and Luke, who had travelled up from England, Steve’s mum, Jeanette, and other friends and neighbours. We all knew how tough it must have been for Justine’s family to have made that trip and it made it all the more special for us that they were there. Another spectator who had made her way especially to offer us her support was Stacy who told me that she had run the race the previous year after her mother had suffered a stroke and that the Stroke Association had been an important help in her recovery. It was great to get their support. 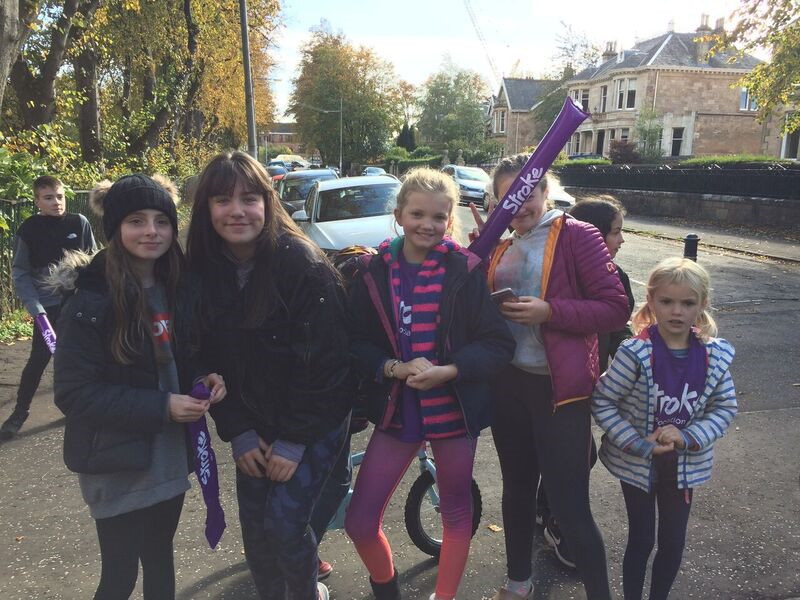 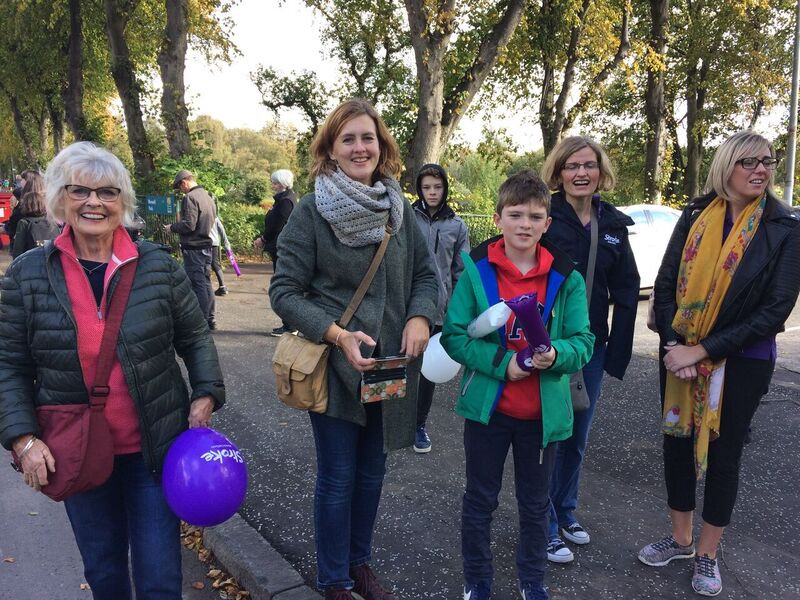 On the way through Pollok Park I had a chat with another runner raising funds for the Stroke Association. It was inspirational as well as being quite humbling to hear of the efforts and commitment of those doing their bit to help others less fortunate. As we approached Pollok House I knew that we were almost at the half way mark and we were going well with no injuries and all in good form. Then ‘Team Justine’ got an unexpected boost with Steve doing a live interview for the BBC as part of their coverage of the event. It was a masterclass of television storytelling - clear and concise in getting the message across that strokes can effect everyone - and delivered while still running on the spot! It was remarkable to witness. Here was someone who had recently endured so much grief and despair sharing that personal and normally very private experience with a TV audience in the hope that it might help others. We all recognised the significance of what he had done.

As we made our way towards the ‘Squinty Bridge’ and the closing part of the race, I ran for a time with another Stroke Association fundraiser. She told me that she was running in memory of her mother who had died earlier in the year. This is normally the stage of the race around the ten-mile mark when fatigue begins to set in and when the finishing line seems a long way off but this young woman was not going to be defeated no matter how rough she felt and I knew that there was no way that she was not going to complete the race. We shared her determination. 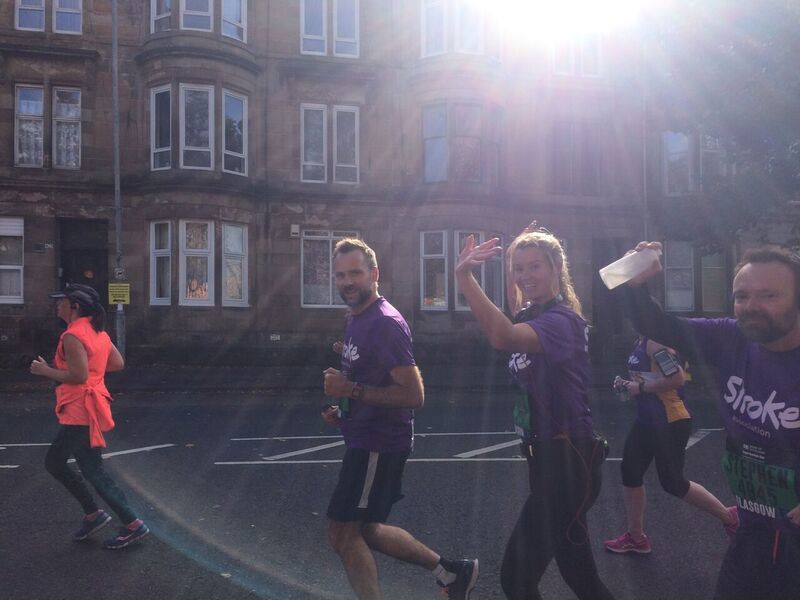 We were getting lots of encouragement from the crowds of spectators and from the bands that were playing along the Broomielaw and got another burst of energy from the Wall of Support message for Steve and ‘Team Justine’. It was such a fantastic feeling to run into Glasgow Green and know that the end was in sight. The noise from the crowds that thronged the barricades towards the finishing line was deafening and we finished, as we had started, as a team. It was tearful, emotional, exhilarating and a huge relief that we had met the pledge that we had made some six months earlier. In over forty years of running, I have never experienced anything that comes close to what I felt that day. The support all along the course was amazing, the camaraderie that came from running as a team with Kimberley, David, Rob, Norman and Graham was a constant source of support, encouragement, and great fun. But what made this day so special and so memorable was the chance to share the experience with the man who, despite everything that had happened to him and his young family, was prepared to put himself and his emotions out there for the benefit of others. It is hard to imagine that out of the darkness and the bleakness of those early days something truly positive and life-affirming could emerge. That is the measure of what Steve has achieved and as a member of ‘Team Justine’ I am proud and honoured to have shared that with him and those closest to him.

To date,‘Team Justine’ has raised £8290 for the Stroke Association. We plan to run again in the 10k Resolution Run in Glasgow on Sunday, 10th March. Any donations once again will be very welcome! - https://www.justgiving.com/fundraising/murdoch-rodgers-glasgow-resolution-run-2019 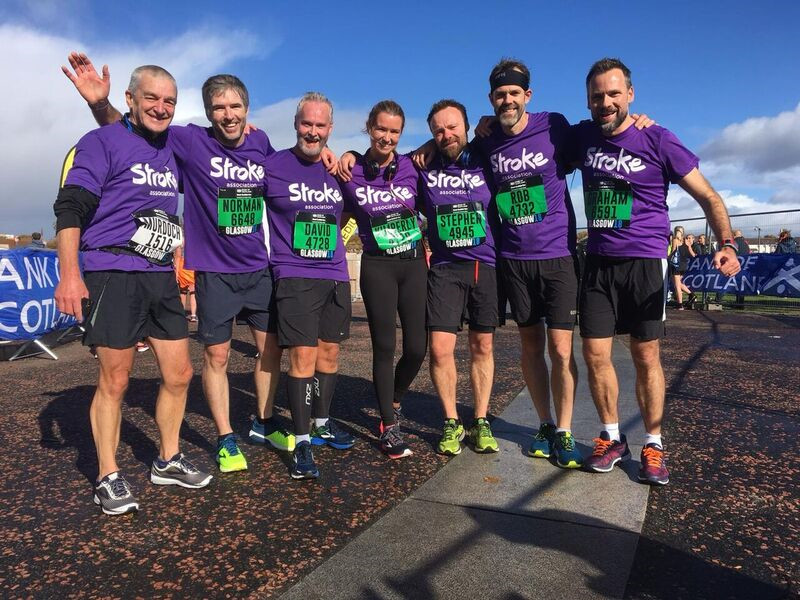