Connor Lynes, 14, from Hull has been presented with a Young People’s Courage Award sponsored by Royal Mail, at the Stroke Association’s Life After Stroke Awards.

Connor received his award from Russell Howard and Vogue Williams in recognition of his unwavering determination to raise awareness of stroke among children.

The charity’s star-studded ceremony, sponsored by the TONI&GUY Charitable Foundation, NEXT plc and Irwin Mitchell, was held at the London’s Dorchester Hotel on 16 November. 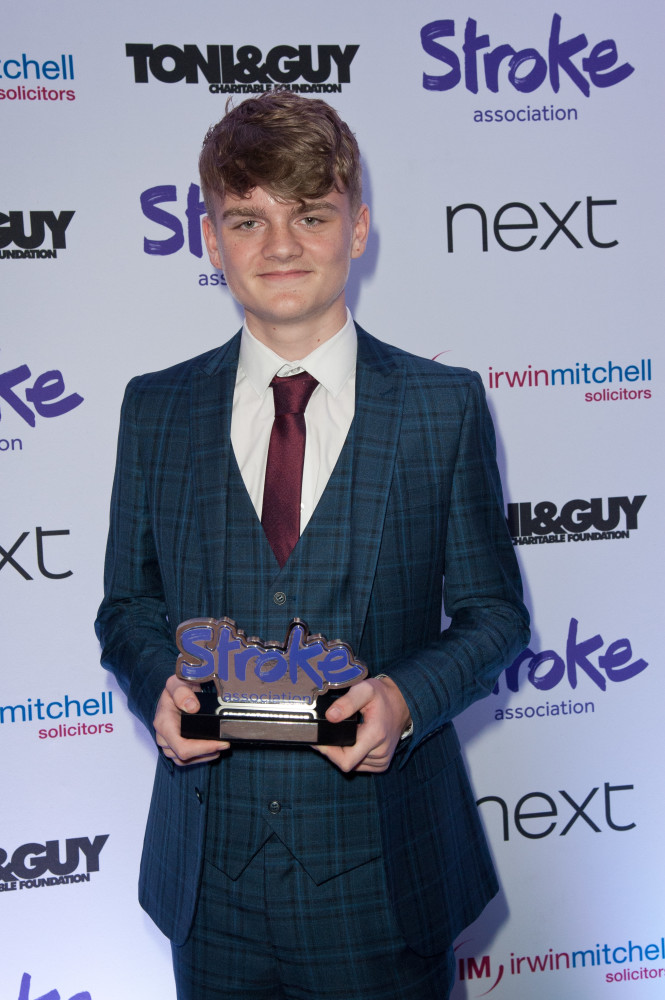 Professional rugby player hopeful, Connor was just 13 years old when he had a stroke in March last year after playing a match. He was tackled by two older boys but displayed no immediate signs of the condition. The following day, his aunt found him in the bathroom, slumped against the toilet and foaming at the mouth.

Conor’s aunt, Sara said, “I immediately rang for an ambulance, but all the time, I kept trying to comfort Connor and reassure him that it was a trapped nerve. The thought of a stroke did cross my mind, but then I thought there was no way the condition could happen to a teenager.”

Doctors told Conor’s family that he had torn an artery in his neck which had caused a clot which had resulted in a stroke. They were told to prepare for the worst. Connor was taken to surgery where the doctor successfully removed enough of the clot to restore some blood flow to the brain.

Connor, who has been unable to return to school, continues to be at risk of further stroke and regularly experiences stroke-like symptoms. His behaviour can be unpredictable and he continues to experience extreme fatigue, headaches and anxiety attacks.

Connor has set up a group to raise awareness of brain injury in sport and raised over £10,000 for charity. He has also raised awareness of stroke among children in Hull through viral social media campaigns where super league rugby teams offered their support by posing with his logo and changing their profile pictures in solidarity.

Sara continues, “Connor is an inspiration and never gives up. He is truly amazing and is definitely flying the flag for brain injury and children affected by stroke. He has continued to help others in spite of the adversity he faces daily. I am very proud that his contribution is being recognised by the Stroke Association.”

To find out more about the Life after Stroke Awards please visit www.stroke.org.uk/lasa

Royal Mail has for the second year running, been presented with the Corporate Supporter of the Year award at the Stroke Association’s annual Life After Stroke Awards.

​The Stroke Association calls on runners to race at Silverstone

The Stroke Association is appealing to runners to help conquer stroke, by joining the charity’s team at the adidas Silverstone Half Marathon on Sunday 12 March.

A three-time stroke survivor has been presented with an Award for Volunteering, sponsored by LighterLife, at the Stroke Association’s Life After Stroke Awards.

A 59-year-old stroke survivor has been presented with an Adult Courage Award, sponsored by Pink Lady, at the Stroke Association’s Life After Stroke Awards.