Amanda Rose, 44, from Weston-on-Trent, is taking on the Stroke Association’s Resolution Run on Sunday 18 March alongside her son Corey, after her husband had a life-threatening stroke.

Amanda’s husband Gary had a stroke in January 2016 aged just 46, and had to undergo a thrombectomy to remove a blood clot from his brain. Just days later, Gary had to have a craniotomy to reduce the swelling on his brain.

Amanda said: “After his first operation, we were told Gary was very poorly and that he would definitely have some form of brain damage, but we didn’t know what the outcome would be. He was very drowsy and couldn’t speak at all. However, after his craniotomy, he was a lot more responsive and alert. I knew he was going to be a fighter!”

After two weeks in Stoke Hospital, Gary began an intense programme of physiotherapy and although he initially couldn’t speak for the first few weeks after his stroke, he eventually started responding with yes and no.

Amanda added: “Gary has aphasia, which means he struggles with communication, although he is much better than he was. He can walk short distances and move his arm, although he can’t grasp. Six months after his stroke, he had another operation, a cranioplasty, to repair his skull. To look at him now, you wouldn’t know he has had a stroke and he is improving all the time; but it’s been a long road to recovery. Gary was very fit and healthy before his stroke. Life is now very different but he’s survived and come out the other side.”

Amanda is preparing to take on the Stroke Association’s 5km Resolution Run at Rushcliffe Country Park on Sunday 18 March, to raise vital funds for the charity. She’ll be running alongside their son Corey, 13.

Amanda said: “Corey wanted to take part in the Resolution Run, but only if I joined him. He’s a keen runner and a member of Derby Athletics Club, so he’s inspired me to get involved. I’m not a runner, but we’re training together! Gary will be there on the day cheering us on, alongside our daughter Maisie. I also have a big group of school friends taking part with us; we’ve been friends for 35 years. We want to raise vital funds for the Stroke Association to help other families affected by stroke to get the support they need.” 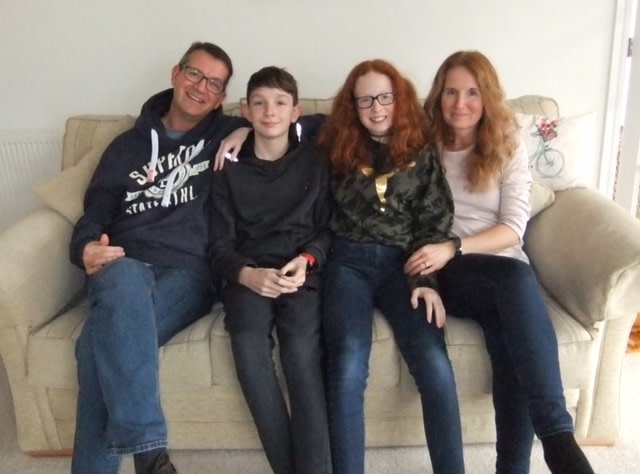 Julie Doherty, Community and Events Fundraiser at the Stroke Association, said: “A Resolution Run is exactly that – a resolution for the New Year that counts. It's the ideal event for people who want to do something fun together, while getting more active in 2018.

“Every five minutes in the UK, someone’s life is turned upside down by stroke. By signing up to a Resolution Run, each runner will help us do so much more to support stroke survivors and their families as they rebuild their lives. We’re thrilled Amanda and Corey are taking part. We’re looking forward to cheering them on alongside our other participants as they make their way through the park.”

At least half of strokes could be prevented if people made simple lifestyle changes, such as keeping blood pressure under control, eating healthily and taking regular exercise. The money raised through the Resolution Runs will help the Stroke Association to fund vital research and support people affected by stroke in the East Midlands.

Entry fee is just £16. All runners receive a technical running t-shirt and medal. For more information about entering or volunteering at the Resolution Run, visit http://www.stroke.org.uk/resolution, email resolution@stroke.org.uk or call 0300 330 0740.

Michelle Richardson, 44, from Uttoxter, is taking on the Stroke Association’s Resolution Run on Sunday 25 February, to mark a milestone in her recovery from a life-changing stroke.

An eight-year-old stroke survivor from Preston is taking on the Stroke Association’s Resolution Run on Sunday 18 March alongside his family, to mark a milestone in his recovery.

Richard Proctor, 51, from Leicester, is taking on the Stroke Association’s Resolution Run on Sunday 11 March, to mark two years since his life-changing stroke.

Charlotte Hickey, 26, from Warrington is taking on the Stroke Association’s 10km Resolution Run this Mother’s Day, to mark 10 years since her mother survived a life-changing stroke.

​Hartlepool family take on Resolution Run for the Stroke Association

Amanda Cadas and her 16-year-old son, Jack, from Hartlepool are taking on the Stroke Association’s Resolution Run on Sunday 18 March, after Jack’s father survived a stroke.