Virgin Trains has unveiled a commemorative plaque at Preston station honouring the Jellicoe Express – the Royal Naval train that transported hundreds of soldiers and sailors during the World Wars.

Recently unveiled by Captain Chris Smith RN, Preston was the final station in England to be adorned with a plaque to recognise its role more than a century ago.

Virgin Trains worked with Another Orkney Production, the heritage group behind the project, to place plaques at each of the 18 stations served by the Jellicoe Express.

The unveiling of the plaque, marked the centenary of journeys made on the Royal Naval train, during the First World War

Named after Admiral Sir John Jellicoe, the commander of the Grand Fleet who led the British forces at the Battle of Jutland in June 1916, the Jellicoe Express carried service personnel to and from the British fleet based at Scapa Flow in Orkney - travelling daily between London Euston and Thurso in Scotland with a journey time of 21hours 30minutes.

The plaque provides a permanent memorial to the Jellicoe Express, which served the city as part of its 717-mile journey.

Preston station was one of the few stops on the route where sailors and soldiers could join the train. It also served as a welcome refreshment stop, where women volunteers worked around the clock to provide refreshments on the platform.

Shirley Ross, Virgin Trains Station Manager at Preston, said: "We're extremely proud to be able to celebrate and commemorate Preston's heritage this way. Preston station played an important role as the Jellicoe Express made its journey between London Euston and Thurso, and today it continues to be a key hub on our west coast route. We are delighted to have been involved in the project and ensure the Jellicoe Express - and the brave men and women who took that journey in both World Wars - will forever be remembered."

Johnny Jellicoe, grandson of the Admiral Sir John Jellicoe, said: "It has been an enormous honour to play a part in the commemorative plaques installed at each station along an epic train line that was named after my grandfather. During both World Wars the railway was a lifeblood to communities local to these stations and it continues to be so today. Hearing the amazing stories and personal experiences of those closest to the Jellicoe Express has been a complete privilege. This project has brought people together to create a lasting legacy that commemorates the servicemen and women and those who kept the Jellicoe Express running day in, day out."

Moya McDonald, Project Co-ordinator at Another Orkney Production, said: “It has been an honour to work on this project. Since April 2017, 17 plaques have been installed at stations where the Royal Naval train stopped on its daily journey of 717 miles between Euston and Thurso in both World Wars – with Preston being the last station in England before the final plaque is unveiled at Forsinard. Many people and organisations helped to make this project happen and we are very grateful to them all, especially Virgin Trains who could not have been more helpful.” 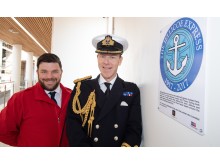 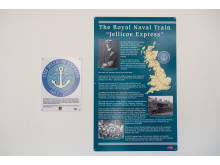