Local artists descended on Stoke-on-Trent station to give rail travellers and passers-by a taste of The Big Feast 2019 - the city's biggest outdoor Arts Festival, which takes place this weekend.

Hosted by Virgin Trains, Entrepreneurs Network - an organisation made up of a series of creatively-led projects, who will be creating artwork live on the streets during the Festival – invited people at Stoke-on-Trent station to create a piece of artwork that represents the city.

Taking four hours to complete, with the help of volunteers of all ages, the colourful artwork showcases Potteries dialect – ‘Owat Duck’ – a warm, friendly greeting, which means ‘how are you duck?’. It will be on display at Entrepreneurs Network’s gallery space.

The Big Feast, organised by arts programme, Appetite, offers a jam-packed programme of acts and interactive shows created by local, UK and international artists for all ages and takes place on the streets of Stoke-on-Trent’s city centre.

Mark Taylor, Virgin Trains Station Manager at Stoke-on-Trent, said: “We really enjoyed hosting these art sessions to give people a flavour of The Big Feast and were all really impressed by the artwork created by so many people with the help of Entrepreneurs Network. For over 22 years Virgin Trains has built close relationships with the communities we serve and it was a privilege to help to bring people together through art and to champion Stoke-on-Trent and its people. If the street art sessions are anything to go by, we’re sure the thousands of visitors to the city centre will have an amazing time this weekend.”

Commenting about the street art sessions at Stoke-on-Trent station, Tom Edwards, from Entrepreneurs Network, said: “It was lots of fun working with the public at Stoke station. It’s a beautiful building and a great venue for us to engage with a new audience.”

The Big Feast will take place in Stoke-on-Trent city centre on Friday 23rd and Sunday 24th August. More information can be found at: www.appetitestoke.co.uk.

Entrepreneurs Network is an organisation made up of a series of creatively-led projects based in Stoke-on-Trent. The business consists of a large screen printing workshop and gallery space, both of which are open to the public.

We host a variety of workshops and have a constantly growing mural program as well as project managing a large outdoor artists space.

We aim to be catalysts of urban culture in the city and wider region by using these projects alongside creative commissions.

A portfolio of some of our work can be found here: www.ntrprnrs.com

Prepare for an electrifying August Bank Holiday weekend with your friends and family as our annual FREE festival of arts and performance, The Big Feast returns to the streets of Stoke-on-Trent city centre.

With the most jam-packed programme yet including not one, but two UK premieres, we’re unleashing some seriously inspiring and entertaining acts created by artists from Stoke-on-Trent, the UK and the world onto the streets for your delight.

From mesmerising juggling that has wowed global audiences and hilarious bicycle-powered musicals, to gentle puppetry and circus to get you thinking and wild marching bands parading musical magic. There’s something for little kids, big kids, teenagers and Nanna too. Plus, there’ll be an opportunity to get stuck in, with group dancing at the brand new Piccadilly Stage and drop-in graffiti sessions at The Big Feast Graff Jam. And, as ever, it’s all FREE.

Appetite aims to get more people in Stoke-on-Trent to experience and be inspired by the arts. Appetite kick-started the programme in Summer 2013 with a Taster Menu and since then has brought a feast of family friendly, breath-taking arts events to Stoke-on-Trent to be enjoyed by thousands across the city. Working with our community decision makers, Supper Club, over the last six years Appetite has engaged 467,346 audience members, 47,458 participants, 1136 artists and 1104 volunteers.

The Appetite programme is funded by Arts Council England and is led by the New Vic Theatre in partnership with Partners in Creative Learning, 6Towns Radio and Staffordshire University. Appetite also works closely with Stoke-on-Trent City Council.

Appetite is part of the Creative People and Places programme, initiated and funded by Arts Council England. Creative People and Places is about more people taking the lead in choosing, creating and taking part in art experiences in places where they live. There are 21 independent projects, each located in an area where people have traditionally had fewer opportunities to get involved with the arts. www.creativepeopleplaces.org.uk 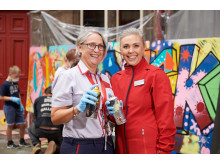 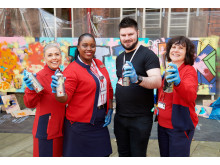 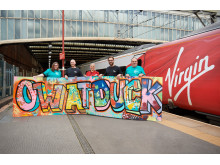 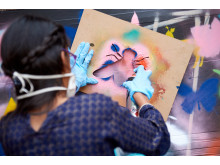 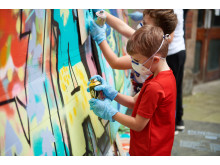 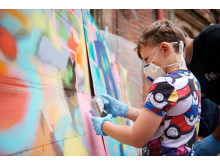