Almost four years after naming a Virgin Trains Pendolino in her son Stephen’s honour, Jane Sutton returned to Birmingham International to be presented with one of the original nameplates.

Stephen’s train - which is now sporting new vinyl nameplates, as part of a recent repaint programme - has been seen the length and breadth of the UK, clocking up over one million miles since its naming in September 2015. Jane was presented with the original nameplate by Amanda Hines, General Manager for Virgin Trains in the West Midlands.

The second nameplate, along with ten others from the Virgin Trains fleet, will be auctioned off, with proceeds going to Stephen’s chosen charity, Teenage Cancer Trust. The eagerly sought after items of railway memorabilia are expected to raise around £15,000 contributing towards Jane’s £6m fundraising target.

“We’re incredibly honoured to have had one of our Pendolinos carry Stephen’s name,” Amanda commented. “We needed to find a good home for the original nameplate so who better to present it to than his Mum Jane, who continues to work so tirelessly raising funds for teenage cancer”

“The sale is a rare chance for someone to get their hands on a piece of railway history, so we are hopeful of raising a lot of money for Teenage Cancer Trust.”

“It’s been a huge honour for one of Virgin Trains Pendolinos to carry Stephen’s name,” added Jane. “I really enjoy seeing people’s photos that they post on Stephen’s Facebook page when they have spotted the train on their travels on the west coast route.

“It is incredibly generous of Virgin Trains to gift me one of the original cast-iron nameplates and to auction off a further eleven, with the proceeds being donated to Teenage Cancer Trust. This will significantly boost Stephen’s fundraising total towards the £6million target that I would like to reach this year.”

NAMEPLATES UP FOR GRABS

The following nameplates are up for auction: -

People can bid for them by sending a sealed bid to nameplates@virgintrains.co.uk. The auction closes at 17:00 on Friday 6 September 2019. Winners will be notified by email, with payment to be made direct to Teenage Cancer Trust. 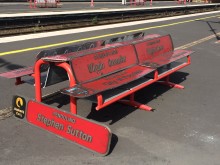 Some of the Virgin Trains... 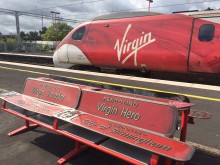 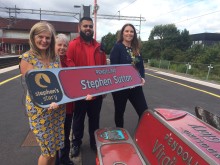 Jane Sutton and the Virgi... 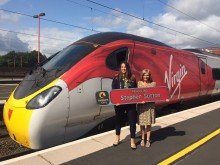