Virgin Trains has unveiled a commemorative plaque at Crewe station, recognising the important role the Royal Naval train played in transporting soldiers and sailors along the West Coast Main Line, over 100 years ago.

Working with two Community Rail Partnerships (North Staffordshire and Crewe – Manchester), Virgin Trains marked the centenary of the journeys made on the Jellicoe Express, during the First World War, with a plaque on Platform 12.

Named after Admiral Sir John Jellicoe, the commander of the Grand Fleet who led the British forces at the Battle of Jutland in June 1916, the Jellicoe Express carried service personnel to and from the British fleet based at Scapa Flow in Orkney - travelling daily between London Euston and Thurso with a journey time of 21hours 30minutes.

Unveiled by Cllr Pam Minshall on behalf of Crewe Town Council, the plaque provides a permanent memorial to the Jellicoe Express, which served the town as part of its 717-mile journey.

Crewe station was one of the few stops on the route where sailors and soldiers could join the train. It also served as a welcome refreshment stop, where over 300 women volunteers worked around the clock to provide refreshments in a canteen on Platform 6.

With the help of the local community Virgin Trains has created a small display using images of Crewe station and accounts from people who travelled on the Jellicoe Express to illustrate the facilities available for armed service personnel during the First World War. It is available to view until Friday 15th June.

Heather Hodkinson, Virgin Trains Station Manager at Crewe, said: "At Virgin Trains we're proud to celebrate a significant part of Crewe's heritage. Crewe station played an important role as the Jellicoe Express made its journey between London Euston and Thurso, and today it continues to be a key hub on our west coast route. We've really enjoyed working with the local community to offer an insight into the station during the First World War and help ensure the Jellicoe Express will forever be remembered here in Crewe."

Cllr Pam Minshall, Crewe Town Council, said: "I am delighted to be part of the Jellicoe Express project alongside Virgin Trains. Crewe was able to play a small but significant part in helping thousands of naval personnel travel between London ad the North of Scotland during World War One. I am really pleased that there is now a fitting memorial on Platform 12 at Crewe station to commemorate the journey and the lives of so many."

Nick Jellicoe, grandson of the Admiral Sir John Jellicoe, said: The railways were, in a very real sense, the Navy’s vital lines of supply. From every corner of the country, munitions, food and manpower were transported north through its steel arteries. And from neighbouring Wales, all of that of course, but also its famous black coal. John Jellicoe was the first to acknowledge the tremendous debt that he – and the Navy – owed the men and women who worked these trains in a relentless race against time. And maybe, especially to those who kept the Jellicoe Express running on time, day in, day out.”

Michael Willmot, Chair of North Staffordshire Community Rail Partnership, said: “The naval train, the Jellicoe Express, ran from London to Thurso for Scapa Flow from 1917 in World War One and again in World War Two. Steeped in the intense emotions of the thousands who used it: fear and apprehension of those about to start a tour of duty; relief and joy, of those returning for leave. It was the longest scheduled rail service ever to run in the UK. Many of those travelling out were sadly never to return. It is right that a permanent memorial should be established at Crewe, a major refreshment stop en route, to commemorate all those who used the train and all those who provided sustenance and support at stations along the anxious 22 hour, 717-mile route.”

Stagecoach and Virgin are working in partnership to operate the West Coast and East Coast inter-city route under the Virgin Trains brand. Together, they are on track to revolutionise rail travel across the UK.

The combined network connects some of the nation’s most iconic destinations including Glasgow, Liverpool, Birmingham, Manchester, Edinburgh, Newcastle, Leeds, York and London.

Virgin Trains is operating the East Coast route until June 24, 2018 after taking over the business in March 2015. In that time, we have invested £75m to create a more personalised travel experience, including over £40m in our existing fleet. Customers can now benefit from 48 additional services between Edinburgh and London every week, and an extra 22 Saturday services between Leeds and London – a total of 1.74 million additional seats since May 2015.

The West Coast route has a proud record of challenging the status quo - from introducing tilting Pendolino trains, to a pioneering automated delay repay scheme and becoming the first franchised rail operator to offer m-Tickets for all ticket types.

Working together, the partnership railway of the public and private sectors has published a long-term plan, called In Partnership for Britain’s Prosperity,to change and improve Britain’s railway. The plan will secure almost £85bn of additional economic benefits to the country whilst enabling further investment and improvement, and contains four commitments which will see rail companies: strengthen our economic contribution to the country; improve customers’ satisfaction; boost the communities we serve; and, createmore and better jobs in rail. For more information go to Britain Runs on Rail. 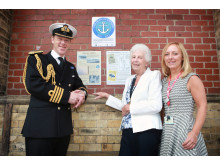