A 101-year-old Second World War veteran received a hero’s welcome from railway workers, Virgin Trains staff and military personnel at Preston station as he made the trip to London for the Festival of Remembrance.

Ernest Horsfall, better known as Ernie, served in the Army’s Royal Electrical and Mechanical Engineers (REME) between 1940 and 1946. He was greeted at the station by a piper, Royal British Legion standard bearers, local Army Cadets, Virgin Trains and Network Rail staff as he boarded the London-bound train.

After hearing Ernie was making the journey to the capital, the Virgin Trains team wanted to give the veteran a memorable trip and arranged a guard of honour with Network Rail at Preston as well as First Class travel to make his trip extra special.

His friend, Terry Cook, organised the guard of honour and VIP journey for Ernie as a thank you to him and armed forces personnel, past and present.

The centenarian, who lives in Preston, was responsible for Army vehicle workshops, just behind the front line, and served his first six months in London during the Blitz. Ernie is now a licenced inspector for light aircraft, ensuring they are fit for flight.

Mr Cook, a former serviceman whose father served in the Royal Navy, said: “Not only do we all owe a great debt of gratitude to Ernest and his colleagues for their service and sacrifice, but he and his colleagues remain a great inspiration to me and a role model for so many of us. Ernest and I are incredibly grateful to the wonderful people of Network Rail and Virgin Trains for their heart-warming kindness. And special thanks too to the Kirkham Grammar School Cadets, the Royal British Legion in Preston and to Bill the Piper for making the send-off so memorable.”

Shirley Ross, Virgin Trains Station Manager at Preston, said: “All the team here at Preston, and along our route are so proud to have Ernie travel with us to the Festival of Remembrance. When we heard of Ernie’s trip, we wanted to make it an extra special occasion to give him a memorable journey, and to say thank you for his service at this important time of year.”

Phil James, Network Rail’s Route Director for the North West, said: “It’s only right that we make a fuss of Ernie. He and his armed forces colleagues have done so much for this country. Our thoughts and gratitude are with Ernie and his services colleagues, past and present, this weekend and on Monday, 11 November, as we mark the signing of the Armistice.”

Stagecoach and Virgin have worked in partnership to operate the West Coast inter-city route under the Virgin Trains brand, revolutionising travel on one of the UK’s key rail arteries. After operating this route for 22 years, Virgin Trains is due to hand over to First Trenitalia on December 8, 2019. 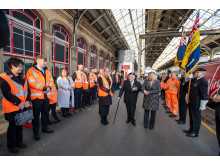 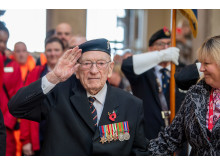 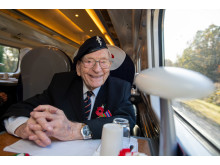 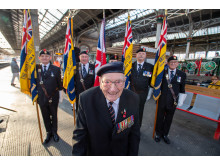 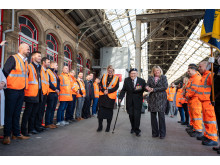