Nationalmuseum has acquired a unique plate warmer dating from the early 18th century. Manufactured by Rudolf Wittkopf, it is Sweden’s only known surviving example in silver. The plate warmer is evidence of the prestige attached to French style by the Swedish upper class at that time.

A plate warmer manufactured by Rudolf Wittkopf in Stockholm in 1709, believed to be a unique artifact, has been added to Nationalmuseum’s collection of early 18th-century Swedish silver. The piece, the only known surviving example in Sweden of a silver plate warmer, consists of a stand with three cast-metal feet and a removable burner with oil reservoir. The upper section is perforated to improve the airflow to the flame providing the heat, and at the top are three volute-shaped handles that hold the plate of food to be warmed.

The new, refined dining customs that appeared in Swedish upper-class circles in the early 18th century were modelled on French practices. Nationalmuseum’s extensive collection of hand drawings includes depictions from this period of two French réchaudes, or plate warmers, which were intended to serve as models for the modern silverware to be ordered by the Swedish court and aristocracy. The royal household accounts of Queen Hedvig Eleonora show that, in 1705, the fashion-conscious monarch purchased “a silver dish ring that can also be used as a heating dish” from Petter Henning, a Stockholm silversmith. However, little of the royal silverware from this period has survived, and there are no known examples in Sweden apart from the plate warmer now acquired by Nationalmuseum. This suggests that objects of this kind were a rarity even in their day and were probably manufactured only in very limited quantities.

The new acquisition is an important addition to Nationalmuseum’s collection of late baroque silver, illustrating how closely the Swedish court and aristocracy followed contemporary fashion, especially that of France.

Nationalmuseum’s acquisition of the Rudolf Wittkopf plate warmer has been made possible by a donation from the Barbro Osher Fund. Nationalmuseum has no budget of its own for new acquisitions, but relies on gifting and financial support from private funds and foundations to enhance its collections of fine art and craft.

Nationalmuseum is Sweden’s premier museum of art and design. The collections comprise older paintings, sculpture, drawings and graphic art, and applied art and design up to the present day. The museum building is currently under renovation and scheduled to open again in 2017. In the meantime, the museum will continue its activities through collaborations, touring exhibitions and a temporary venue at the Royal Swedish Academy of Fine Arts, Fredsgatan 12, Stockholm. Nationalmuseum collaborates with Svenska Dagbladet, Fältman & Malmén and Grand Hôtel Stockholm. For more information visit www.nationalmuseum.se. 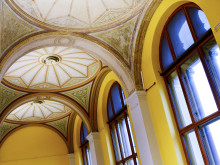