​In May Drottningholms Slottsteater is staging a new production of the classic Beauty and the Beast, a comic opera inspired by the original work that premiered here in 1778.

“This is a fairytale that has been told countless times since the 1700s,” says script-writer and director Tuvalisa Rangström. “We now welcome younger audiences from the age of 6 and up to this magical historical theatre and a show about love, chance and transformation,”

The comic opera Zémire and Azor had its premiere at Drottningholms Slottsteater in 1778 after having conquered Europe in just a matter of years and earned a reputation as Marie-Antoinette’s favourite opera. It’s easy to understand why, with its vindictive elves, spirit ballets, a fearless young heroine and an unhappy Prince who’s been turned into a monster.

Nowadays, adults and children know the story as Beauty and the Beast, a modern classic best known perhaps in its Disney rendition. At Drottningholms Slottsteater, a new work has now been created from the original version, with music largely borrowed from the 18th Century work Zémire and Azor, interspersed with folk music from the same time. The libretto is newly written and also based on the original drama, which is told by an actor, a dancer and four musicians. The production represents a meeting of 18th century theatrical whimsy, enlightenment ideas, beasts, beauties and crafty elves.

On a couple of occasions, the young audience members will be able to engage in true 18th Century philosophical debate as philosopher and pedagogue Johan G:son Berg leads a conversation about what makes a monster and what it means to be human.

Drottningholms Slottsteater has remained intact since 1766 and is listed as a UNESCO World Heritage site. It is the only theatre of its kind in the world that still uses original hand operated stage machinery.

Tickets on sale from 18 March

With the generous support of the Jacob Wallenberg Foundation and the Infinity Foundation.

Drottningholms Slottsteater has remained intact since 1766 and is listed as a UNESCO World Heritage site. It is the only theatre of its kind in the world that still uses original hand operated stage machinery.

If you do not want to receive press information from Drottningholmsteatern, please follow the link below. 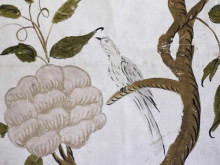