For the ninth year in a row, over fifty thousand participants managed to complete their Winter Week race. This year 52,912 (counting all five Stafettvasan participants) reached the finish in Mora. Put together, they skied over three million kilometres. 3,928 participants aborted their races, and in total there were 66,700 registered participants, counting the 745 children in Barnens Vasalopp.

- 56,840 started and 3,928 aborted their races. This means that almost twice as many aborted their races in 2018 compared to 2017. But it was also an unusually cold Winter Week. 52,912 reached their finish (including the five sections of Stafettvasan), which means that this was the ninth year in a row that over 50,000 skiers reached the finish in Mora.

- Those who finished skied a combined stretch of 3,011,474 kilometres (not counting Barnens Vasalopp)! That's equivalent to 75 trips around the planet Earth!

- About 34 percent of those starting were women and about 66 percent were men.

- 88 percent of the participants came from Sweden and 12 percent from the other 69 nations. (A new record number of nations!)

- In total, 19 skiers were disqualified in Vasaloppet for using prohibited skiing technique, and one for obstructing another participant. Ten or so participants were awarded a 15-minute time penalty due to littering. There was very little littering on the track in all races except Vasaloppet, where there was unfortunately an increase compared to last year.

- 24,982 trips were made to the start, and from the finish, on Vasaloppet's own busses. In comparison there were 23,764 in 2017. An extensive bus organization makes things comfortable for participants and reduces the number of cars on the road during race days.

- Sveriges Television's five-hour Vasaloppet broadcast on March 4 had an average of 1,915,000 TV viewers, which is the highest number since 2014. In total 35 percent of the population (3,378,000 viewers) watched three minutes or more of the live broadcast that Sunday morning! Already at 07:30 there were 789,000 early-bird viewers watching the initial half hour before the start. In the afternoon – when the race was summarized in the Mora studio and recreational skiers were given extra attention, with interviews in Evertsberg, Oxberg and at the finish – there were an average of 572,000 people viewing the two-hour broadcast!

- Tjejvasan, which was live broadcast from start to finish for the seventh year in a row, was watched by an average of 175,000 TV viewers. In total, 577,000 viewed some part of the broadcast. (The Olympic curling final, where the Swedish men's team was competing for the first time ever, was broadcast at the same time on a different channel, drawing over a million viewers...)

- Vasaloppet's own streaming service www.vasaloppet.tv, with live broadcasts, clips and finishes, hadtotal of 278,873 viewers over the course of the Winter Week.

- Among other high-profile skiers who reached the finish in Vasaloppet's Winter Week 2018 were Johan Olsson, with multiple Olympic and World Championship golds in cross-country skiing. By completing Vasaloppet, coming in as the 126th man with a time of 4.47.45, he finished the fourth race in En Svensk Klassiker. Johan's total time, counting the four En Svensk Klassiker races, was 15.07.29, which is the 10th fastest total time throughout history, according to En Svensk Klassiker.

Triathlete Annie Thorén aimed to beat the ladies' record in En Svensk Klassiker, and managed it. She skied Öppet Spår Sunday in 6.23.33, getting a total time of 16.16.18. She improved the ladies' record by ten minutes and 34 seconds.

Elite cyclist Emil Lindgren, who with seven Cykelvasan starts has never placed lower than sixth, travelled from Sälen to Mora on skis for the first time, in 6.56.24. Kalle Zackari Wahlström, who held this year's speech in Mora church, got a time of 7.26.15. Skiing reporters Brita Zackari and Johanna Ojala both finished with a time of 11.42.39.

Her Royal Highness Princess Sofia completed Tjejvasan with a time of 3.31.14.

- Veterans are those who have skied at least 30 races (Vasaloppet or Öppet Spår). 26 men and one woman became veterans in 2018. 13 participants completed their 40th race and five completed their 50th race. 84-year-old Börje Karlsson, from Landsbro, completed his 59th Vasaloppet with a time of 11.16.07. The fastest male veteran in Vasaloppet 2018 was Mats Mattes from Edsbyn, 5.21.21, while the fastest female veteran was Eivor Johansson from Navåsen, 8.03.06.

- About 3,000 functionaries made all this possible! A huge thanks to them all!

Sponsorships/late registrations sometimes make the actual numbers below higher than the maximum number of registered participants.

Much more facts, history, lists and charts about Vasaloppet can be found in Vasaloppet's Facts Guide 2018 (in Swedish only):
http://www.vasaloppet.se/faktaguide

Upcoming events in the Vasaloppet Arena:

Vasaloppet is the world's biggest cross-country ski race. Vasaloppet's Winter Week with its cross-country skiing and Summer Week with mountain biking and running attract a total of almost 100,000 registered participants every year. Since the beginning in 1922 over 1.4 million participants have passed the finish line portal in Mora. Vasaloppet is a non-profit making organization owned by IFK Mora and Sälens IF. An engine for public health and sports club activities, in forefathers' tracks for future victories! 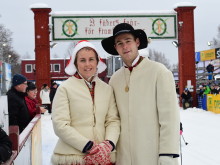 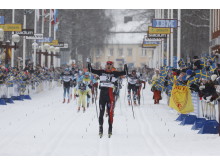