If you are a journalist, DJ, radio station, etc. please hit the "Download Press Pack" link to receive the tracks, photos, etc. If you are not yet set up for that free service contact Matt@dirtywaterrecords.co.uk 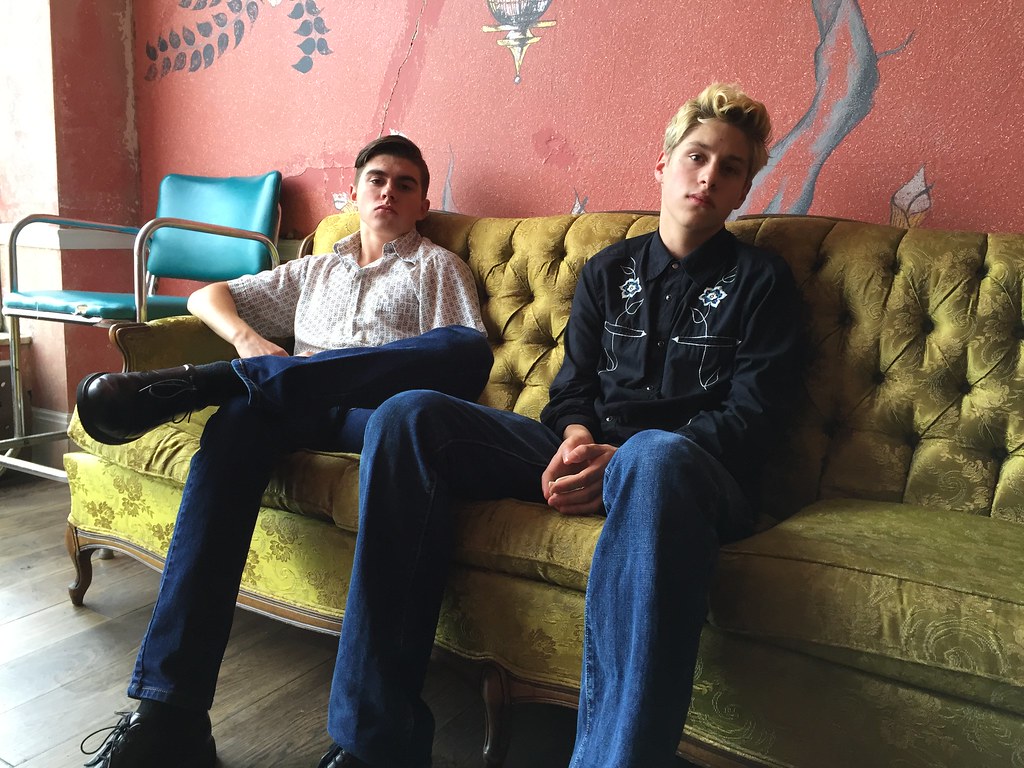 Last week  Dirty Water Records 'officially' released to the wider world the much anticipated debut LP from "the young, trashy organ and drums-only duo", Archie & The Bunkers. CMJ recently penned the "trashy twosome's" debut as, "a clutzy, cavalcade of “organ punk” (as the band have dubbed themselves), one of the better debuts of the year" 2015 indeed has been a year that have seen the band propel from a mostly word of mouth local band to national and international acclaim.

Emmett and Cullen O'Connor have been around as a band since 2013, and have put out a couple of EPs, recorded in their basement. It's not that the two, who live in Rocky River, Ohio with their parents, Martin and Jen O'Connor, are intentionally following the footsteps of two-man bands like Akron's the Black Keys. 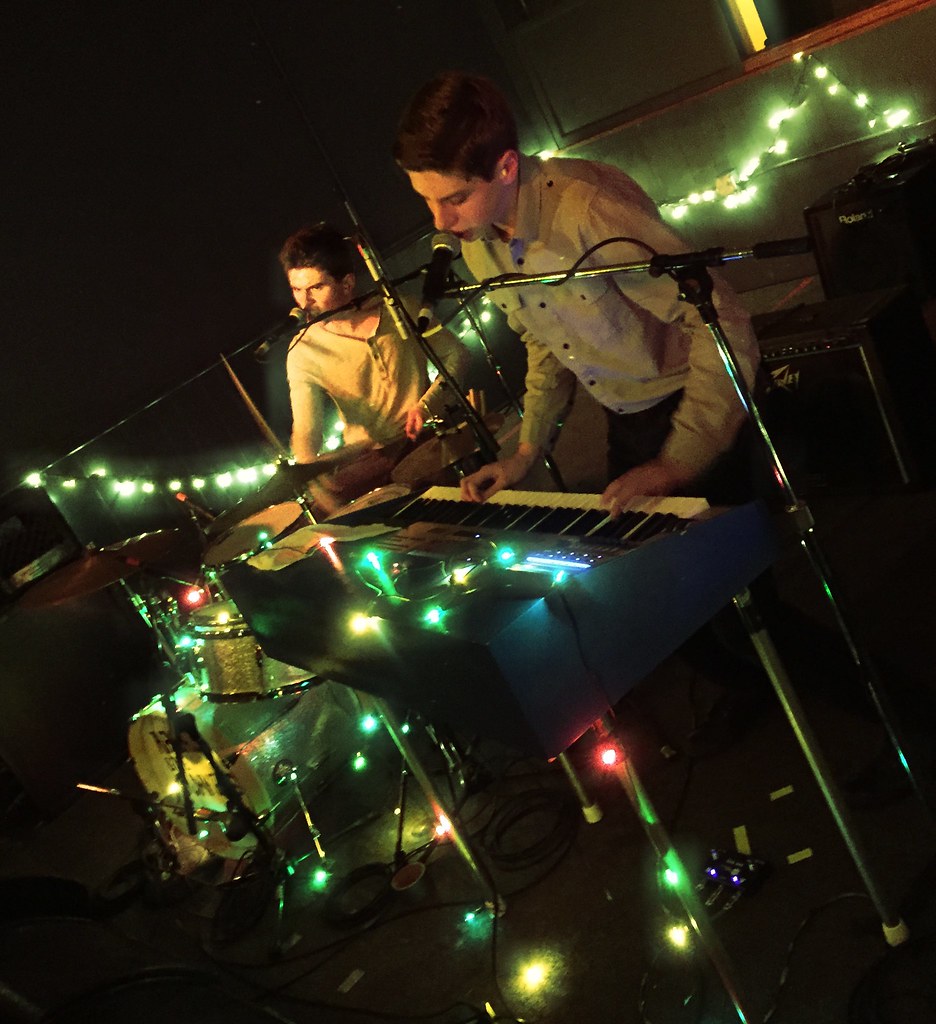 "It didn't start out that way,'' says Emmett. "My brother at the time was playing bass and we were looking to start a band, and looking for a guitarist. "We went through quite a bit of guitarists and it really wasn't working out,'' Emmett said. "They were too busy or they weren't the sound we were looking for.'' So Cullen came up with the idea for the organ. His older brother wasn't quite sure, and then he found the '70s band the Screamers – which boasted a singer, a drummer and a pair of organ players. 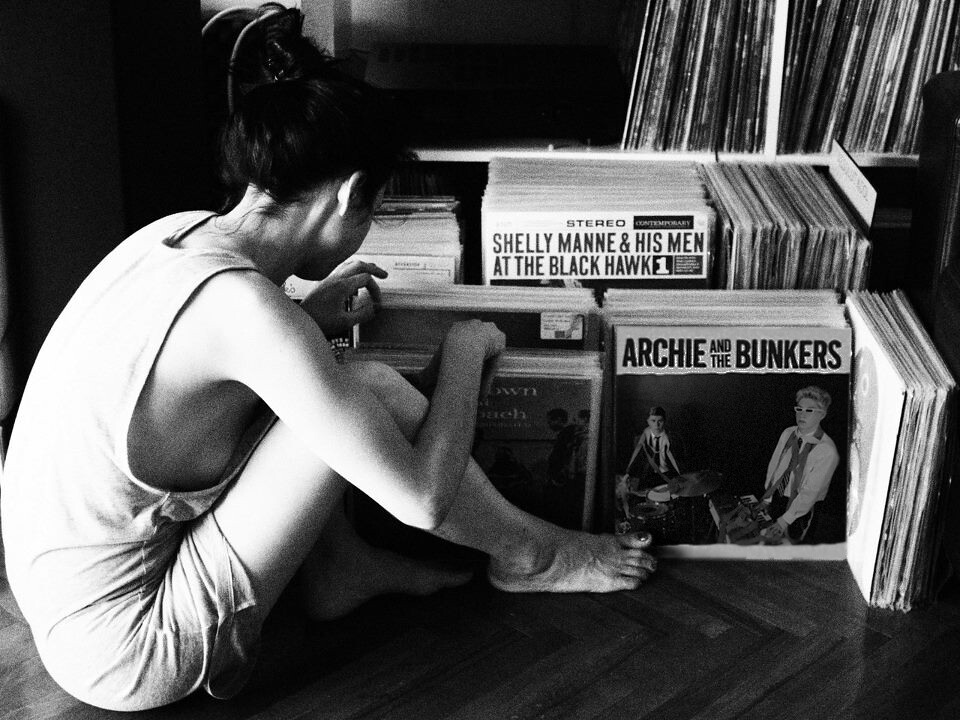 Somehow prophetically, the late great Lux Interior from The Cramps described in an interview, ( long before the boys were even conceived ) the precise formula of how and why Archie and the Bunkers are making big things happen for themselves:

A&TB sometimes draw initial attention from a crowd because of their tender years. But their ages belie the talent and powerhouse show they put on every time they hit a stage. You wouldn’t expect that a band with a combined age of just 31 years to prefer garage rock over the types of music favoured by most of their peers.

But with a sound that draws heavily from diverse musical influences ranging from jazz organ greats like Jimmy Smith, and Richard ‘Groove’ Holmes, to punk icons Dead Boys (they opened for original member Cheetah Chrome earlier this year), The Stooges, The Screamers, The Damned, and more, these home-schooled siblings have obviously been receiving an education that is far less limited than that of kids who attend the local high school. 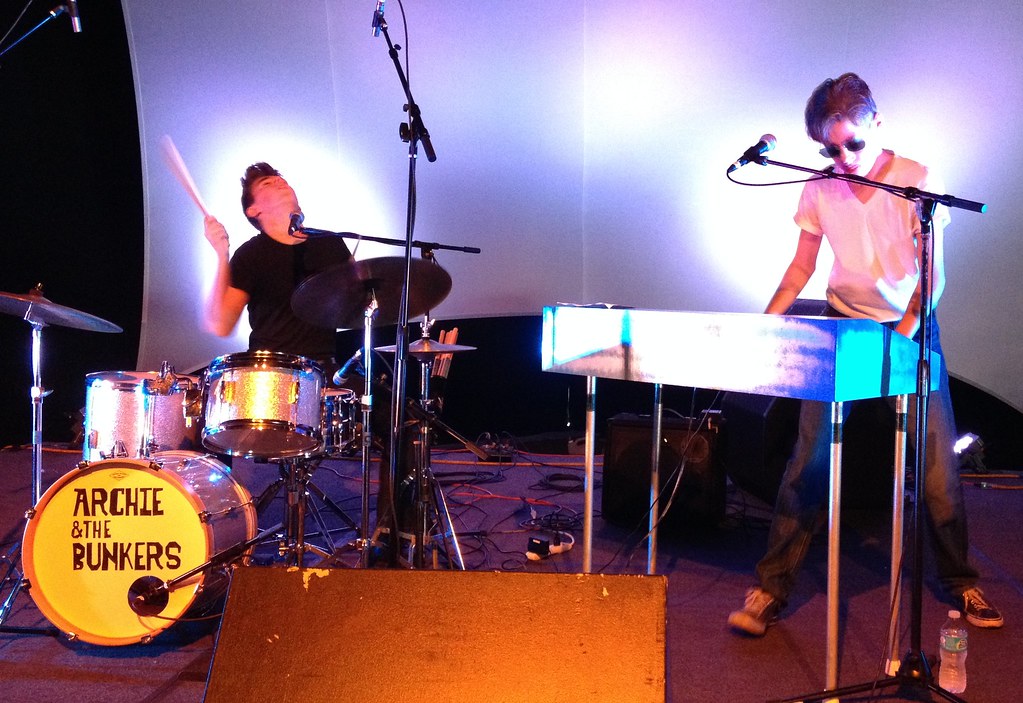 This unique kind of cultural maturity may be the result of their being home-schooled by their mom Jen, 39, who also teaches ballet dancing on nights and weekends. The family doesn't have cable television and the boys don't own or play video games. "What makes them unique is that they aren't caught up in popular culture. They prefer vintage stuff," said Jen O'Connor who has been married to her Cleveland Heights firefighter husband Marty, for 17 years.

"Both boys have strong character," she said. "They are not afraid to be different. They are who they want to be."

It's this unique character, raw spirit, integrity and hard work that have endeared these fine young men into the musical hearts and minds of the masses and the bands they've shared the stage with: The Detroit Cobra's, Obnox, The Sonics, The Fleshtones, The Woggles, King Khan and the BBQ Show, The Rezillos and many more. King Khan himself declared recently after a gig, "One of my new fave bands! First two boys I would consider future son in laws!"

Lamont Thomas of Obnox can't get enough of the lads either: “These kids are damn good, and I know plenty about bands that have only two members. One thing I know is these two are wise beyond their years, respectful and classy. Cullen’s organ skills are so true that I’ve included him on the next Obnox and Blaxxx releases. This band is one of my favorites in Cleveland or anywhere else for that matter.”

What the critics are saying:

“Archie and The Bunkers are the next big thing on my radar. These two brothers, not yet out of high school, send a shocking amount of sound waves into the atmosphere for just two people.”  Cellar Door: Cleveland Arts and Culture 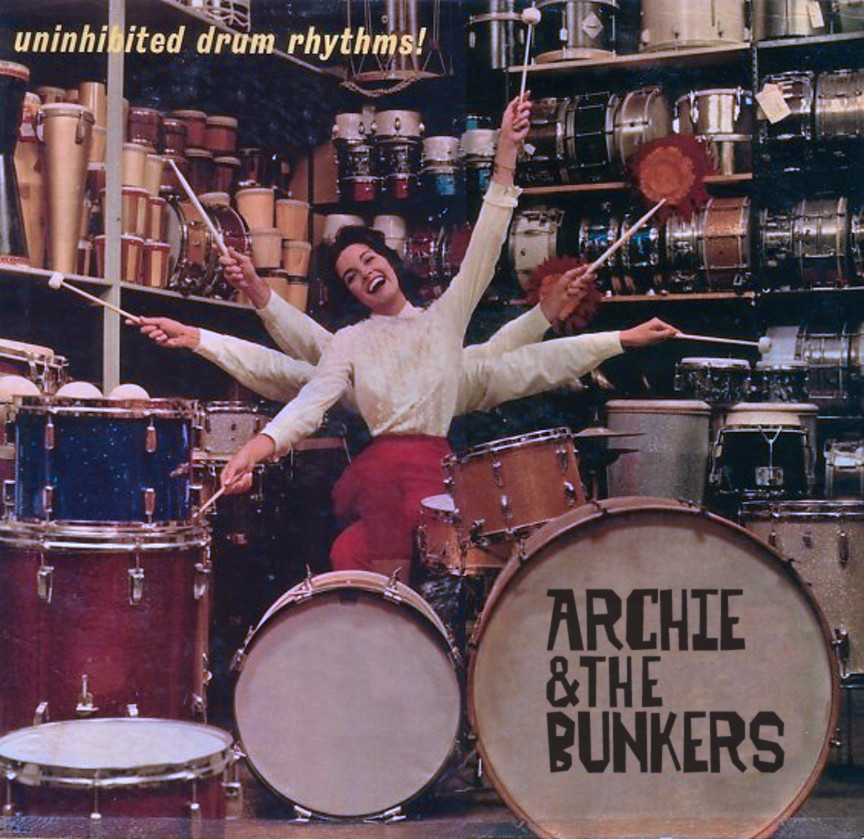 Dubbed as ‘Hi-Fi Organ Punk’, the Archie and the Bunkers sound, to simplify things, is a compelling mix of garage punk and masterfully stripped back rock ‘n’ roll infused with a contagious revelry which has ears and imagination spinning. Created on drums, organ, and vocals alone, it is an enticing which has feet and emotions fully involved in scant minutes whilst in regard to its creators, to use the phrase Paul from Dirty Water Records, who are releasing the US duo’s self-titled debut album, used when introducing them to us, “ There is no one like them."  Ringmaster Review

Very, very rarely is one of my favorite albums of the year released as late as November. I mean, it happens ... just not all that often. Usually, I need some time to digest a new album, especially if it’s a band’s first proper full-length. So let me just say outright that a couple of teenage brothers from Cleveland made one of the best records of 2015.  The Durango Herald

Forging ahead with their own genre, Hi-Fi Organ Punk - hmm, not quite as dramatic-sounding as 'black metal' - this snotty Ohio sibling duo are a half Damned-half Animals rock'n'roll mongrel. Sixteen-year-old singer/frontman Emmett could be a Jack White in-the-making. Watch this sports-jacketed, tapered-trousered space.  Classic Rock

Holy shit, this record is smokin'!! Great name & iconic sleeve, this brothers duo just captivates your attention from the very beginning. After 2 self produced EPs, they chose the Ghetto Recorders studio and Jim Diamond to bring out their music. Top choice, of course! The Farfisa organ sounds huge and works perfectly with the drums. As if Keith Moon quit amphetamine for a more steady beat while with James Taylor & Booker T. if they were garage punk teenagers. Wonderful mix.  Voix de garage

Archie & The Bunkers is Emmett on (drums/vocals) and Cullen (organ/vocals), from Cleveland, Ohio. They began recording music in their basement, and then going out into the wider world playing live shows in which they reportedly attack their songs with a frenetic energy that whips the audience into a frenzy.

The two members of Archie and The Bunkers are teenage brothers from Cleveland, Ohio, who live with their parents. You need to know because media types will get hung up on that fact when these kids get better known.

Since the release of their debut album on Dirty Water Records at the tail end of last year, Archie & the Bunkers have been on the trip of a lifetime before even graduating high school.

Archie and the Bunkers, which consists of teenage brothers Emmett and Cullen O'Connor on keys and vocals, formed in 2013. They are a musical anomaly in that the compositions they write are refreshingly new, but they draw their influences from classic musicians and movies of the past.

Archie and the Bunkers, which consists of teenage brothers Emmett and Cullen O'Connor on keys and vocals, formed in 2013. They are a musical anomaly in that the compositions they write are refreshingly new, but they draw their influences from classic musicians and movies of the past.

Archie and The Bunkers is an American rock’n’roll duo formed in Cleveland, Ohio, in 2013. The group consists of teenage brothers Emmett (drum/vocals) and Cullen O’Connor (keys/vocal).

VIDEO OF THE DAY: Archie and the Bunkers – I'm Not Really Sure What I'm Gonna Do

Archie and The Bunkers is an American rock’n’roll duo formed in Cleveland, Ohio, in 2013. The group consists of teenage brothers Emmett on drums and vocals (16) and Cullen O’Connor on keys and vocals (14).

Archie and the Bunkers Play The Classics - Live!

Archie and The Bunkers played their favorite songs in their own HI-FI- Organ Punk style at the Euclid Tavern in Cleveland, Ohio on Friday, September 11th.

Archie and The Bunkers - New Video Single Premiere: "You're My Pacemaker"

Straight from the city of Cleveland Ohio - the home of The Electric Eels, Albert Ayler, and Screamin' Jay Hawkins- comes the newest sensation in Rock n' Roll. This new sound will make you shake, shiver and smash things up. Teen Punk, by teenagers, for anyone who will listen. This is the real deal, this is HI-FI Organ Punk

Cleveland brothers Emmett and Cullen O'Connor have been getting a lot of good press – for good reason – for their "hi-fi organ punk.'' No less than Alternative Press says the duo "will own you in 2016.'

Archie and the Bunkers is Emmett on (drums/vocals) and Cullen (organ/vocals), from Cleveland, Ohio. They began recording music in their basement, and then going out into the wider world in 2013 with their two self-produced EPs and playing live shows in which they reportedly attack their songs with a frenetic energy that whips the audience into a frenzy.