Thameslink platform staff and Bedford residents Anna Pugh and Rachel Hodgson have teamed up to create a free book exchange at the town station for passengers and staff.

The scheme was launched on Friday, 23 March, by Bedford’s best-selling author Ruth Hogan, whose debut work, The Keeper Of Lost Things, sold over half a million copies in over 30 countries (see editor’s notes).

Long-term Bedford resident and book club enthusiast Anna Pugh, of De Parys Avenue, had the idea for the book exchange with her friend Rachel Hodgson of Park Avenue, whilst discussing what to do with overfilling bookshelves. Rachel asked the Bedford station team what they thought of their idea.

Rachel said: “I’ve seen book exchanges at a number of other stations and through what a great thing that would be for Bedford. The station staff jumped at the idea.”

Platform supervisor Trudy Habgood has been ‘full-steam’ putting the proposal into action ever since. She’s sourced three bookcases and given them a lick of paint and collected still more books from other staff and some of the regulars who travel through the station. Thameslink Lost Property has really come up trumps with unclaimed good reads left behind on trains.

Trudy said: “I have long thought it would be a good idea to set up a book exchange for our passengers. Rachel’s suggestion made perfect sense.”

The bookcases have been placed close to the ticket gates. Posters have been put up advising passengers of the scheme, asking them to feel free to pick up a copy – as long as they replace it with one of their own.

Ruth Hogan’s debut novel The Keeper Of Lost Things has been published in over 30 countries worldwide, won the Richard and Judy 2017 Autumn Book Club Readers’ vote, is a Sunday Times Bestseller and has now sold over half a million copies. 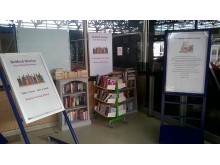 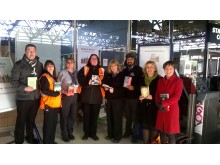