Cyclists have welcomed improved cycle storage space at Meldreth station thanks to an investment of nearly £13,000.

Govia Thameslink Railway has been awarded funding from the Department for Transport, via the walking and cycling charity Sustrans, to make a series of improvements for cyclists across its rail network.

South Cambs District Council has also contributed funding for the Meldreth scheme, which will see a two-tier bike rack installed at the station and improvements made to lighting, plus the addition of security cameras. Currently, there are eight cycle spaces at the station. The new rack will create room for 16 bikes with construction due to start this month.

Cyclist and rail user Susan van de Ven, who is County Councillor for Bassingbourn, Melbourn, Meldreth and Whaddon, said: “The new cycle parking provision at Meldreth is extremely welcome, and we'd like to thank Govia Thameslink Railway and South Cambs District Council's Zero Carbon Communities Grant for making it possible. For many cycle/rail commuters, secure cycle parking is essential. Our Community Rail Partnership is committed to encouraging people to access the station on foot or by bicycle whenever possible, so this is a wonderful step in that direction.”

GTR’s Head of Environment Jason Brooker said: “By improving cycle facilities at Meldreth station, we hope to encourage more rail users to use pedal power as part of their commute. Getting to the station by bike is not only good for the environment, but it has multiple health benefits for the cyclist. We also hope that people will feel more confident leaving their bikes at the station thanks to the new lighting and security cameras.”

Jason added: “We would like to thank the Department for Transport and the council for their support in funding this project.”

Anita Konrad, England Director at Sustrans, said: “Combining walking and cycling with rail helps people reduce their reliance on the car and makes for healthy journeys. The shift towards more sustainable modes of transport can also go a long way to alleviating congestion and air pollution in our towns and cities and more environmentally friendly ways of getting around in the countryside. We hope the new cycle schemes will encourage more people to choose cycling as part of their everyday journey.”

Rail, Cycling and Walking Minister Chris Heaton-Harris said: “Cycling to your nearest station to catch a train to work or school is a great way to keep healthy, reduce emissions and help make our towns and cities vibrant places to live. I’m delighted that as a direct result of Government funding more passengers across the GTR network are able to park their bikes securely, making greener travel more convenient.”

Sustrans is managing the Department for Transport’s CycleRail Grant Fund which provides money to improve facilities for people cycling to railway stations. 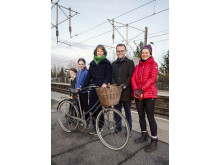 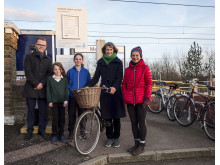 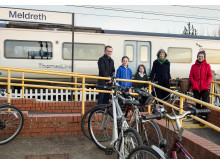 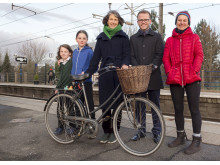 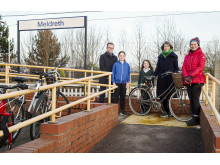