The eye-catching imagery of Handley Page biplanes on the walkway up to platform one was created by Cricklewood-based artist Alistair Lambert. The idea for the mural was put forward by the NorthWestTwo Residents' Association and funded through Govia Thameslink Railway’s Passenger Benefit Fund, set up to provide tangible benefits to passengers across the train operator’s network.

Frederick Handley Page went down in history for his pioneering role in aviation. He founded the first British public company to build aircraft in 1909 and he established a factory in Cricklewood in 1912. After the First World War, for a few years, Cricklewood was home to one of the very first commercial airlines in the world.

By converting the large biplanes developed during the Great War, Handley Page Air Services flew passengers and post between Cricklewood and Paris. These amazing machines, with wing spans of one hundred feet were built in Cricklewood at the same site that they flew from, not far up Claremont Road from where Cricklewood station still stands.

The pilots were out in the open air with their flying goggles on whilst the passengers enjoyed the luxury inside of wicker chairs and spectacular views that few had ever seen before.

Alistair said: “I wanted to capture something of the hope and excitement of those early interwar years. Nowadays flying is a luxury we take for granted and continue at our planet's peril, but back then the sky was the limit and Cricklewood was there at the very start of it.”

Thameslink’s Radlett to Cricklewood Station Manager Marc Asamoah said: “Local residents take huge pride in their station here at Cricklewood and it’s wonderful to see their ideas being brought to life. The new mural has been admired by all who use the station and has generated much interest.”

NorthWestTwo Residents' Association Secretary Marie Hancock said: “We’re delighted to work with Alistair to celebrate Cricklewood’s rich heritage and at the same time, enhance the station environment. This is the first of several projects being delivered at the station thanks to the Passenger Benefit Fund."

At the mural unveiling yesterday [Thursday, March 5] former Handley Page employee Alan Dowsett made a special trip from his home in Epping to see the piece of artwork. Alan, 79, said: “I’m very impressed with the mural. Handley Page was a good place to work; it was like a big family. Old employees still keep in touch.”

Cricklewood’s station partners Cricklewood Town Team have done plenty to enhance the station in the past, including planting at the entrance to the station and the display of 30 welcome signs in different languages. The group’s future plans include a garden area on platform one, which the residents’ association plans to complement with a sculpture and seating. The Town Team are also looking to install a series of history panels in the waiting shelter on platform one, also linking with the Handley Page mural.

The £15m Passenger Benefit Fund was established to provide tangible improvements for passengers across the Govia Thameslink Railway network.

More than 4,200 surveys were completed by passengers, rail user groups, councillors and other interested parties. A further 90 group submissions helped provide input for 96% of the 274 stations.

A website dedicated to the fund was visited almost 24,000 times and the GTR team behind the scheme attended almost 70 meetings to talk to local people about their stations.

Project managers have been consulting further with local groups and stakeholders to assess the feasibility of what people have requested. Among the many projects put forward are new toilets, improved seating and better access. 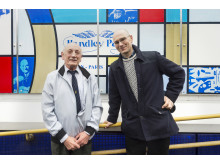 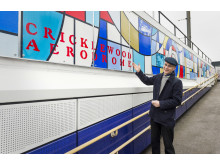 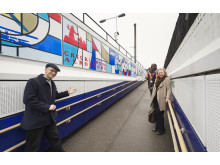 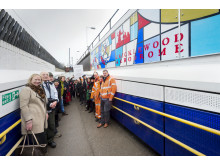 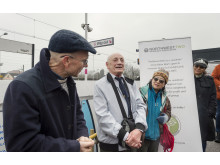 During the speeches at the Cricklewood station's mural unveiling, Alan Dowsett spoke of his days working for Handley Page 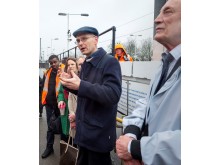