Bright, new tiles will replace two layers of old and stained tiles along the platform walls – just as they have further along the Northern City Line at Moorgate. The new decor will be white walls with a black strip along the bottom, and blue tiles highlighting corners.

GTR’s contractors began work this weekend [1 March], stripping away the old tiles, and removing over 4,000 sacks of rubble – about 40 tonnes. Retiling of the walls, an area of some 600 square metres, will be completed by the end of April. There will be no disruption to train services.

Tom Moran, GTR’s Managing Director for Great Northern and Thameslink, said: “Islington’s stations on the Northern City Line have been overlooked for years when it comes to investment so I’m delighted we will be smartening up every station on the NCL over the next few months.

“Passengers are now benefiting from the brand-new fleet of air-conditioned trains we introduced last year. This investment is about making sure our stations are also up to the standard passengers expect.”

The new tiles are part of a comprehensive renovation and improvement programme for Moorgate, Old Street, Essex Road and Highbury & Islington stations. It complements Network Rail’s current works on the NCL, which involves a deep clean of the tunnels and the replacement of critical infrastructure, such as rails, to improve reliability. 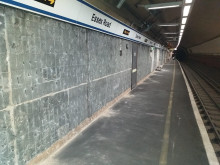 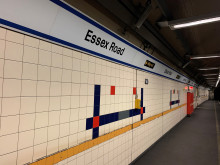