A long-serving Brighton railway worker has been given a send-off to remember by 100 colleagues past and present.

Alan Harvey was 17 when he joined the railway in 1971 as a ‘box boy’, working with a signaller. He then worked for a short time on the platforms before working on board the trains as a freight guard, passenger guard, conductor and finally as an On Board Supervisor with Southern.

To mark his retirement after 49 years in rail at Brighton, 100 current and former colleagues gathered to wish him a fond farewell at the Battle of Trafalgar pub. A special notice was also shown on the information boards at Brighton station to wish him well. [PICTURE AVAILABLE BELOW]

Alan, 65, who lives in Shoreham-by-Sea, said: “I’m still emotional and overwhelmed. I had so many cards and presents. I was so surprised when all these people turned up at the pub to wish me farewell. They gave me a lovely send-off. I still can’t believe how many turned up.”

The self-confessed transport fanatic, whose mother and uncle also worked on the railway, added: “All in all I have loved the job. It’s been quite an adventure and I have met some lovely people on the railway over the years. It’s been my life.”

Southern’s Brighton On Board Service Manager Ciaran Moynan said: “Alan was always passionate about the railways and walked into work with a smile on his face and will be remembered for his enthusiasm and dedication to his passengers. He has always been one of the true characters of the depot and quite the gentleman; loved by colleagues and customers alike. He will be sorely missed, but we all wish him the very best for the future and a happy retirement. Congratulations Alan on 49 years’ sterling railway service!”

Alan loves rock and roll dancing and will use his newfound leisure time to convert his spare room into a ‘jukebox themed diner’ with a blue and white colour scheme, two jukeboxes, traditional diner seating, a little fridge with Coca Cola, nostalgic pictures on the walls and a ‘We’re Open’ sign.

Although he’ll miss the railway, he’s never far away from the job he loved as his home overlooks the railway tracks. 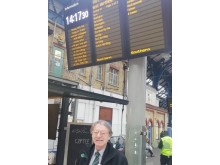 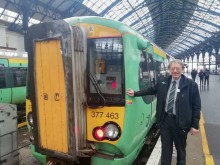 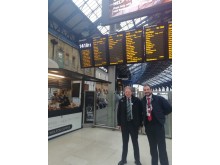