Passengers are having the first taste of a vastly expanded commuter rail network with the introduction of an historic new service on Thameslink by Govia Thameslink Railway (GTR).

Six new ‘preview’ services are running for the first time between Cambridge and Brighton, and Peterborough and Horsham.

These trains, which run through new tunnels brought into use by Network Rail at St Pancras International, will eventually connect passengers directly from 80 more stations in southern England through central London stations such as Farringdon, City Thameslink and Blackfriars.

From May 2018 when the full service begins, this will create space for 40,000 more passengers during peak periods into London, delivering a much-needed capacity boost for the rail network.

Nick Brown, Chief Operating Officer of GTR which runs Thameslink, Southern Great Northern and Gatwick Express, said: “This is a landmark moment and shows that GTR is delivering on its promise to give passengers a new, high-intensity service to a greatly expanded network of stations. We are massively boosting capacity for 40,000 more passengers each weekday peak this May, rising to 60,000 next year.

“As part of our RailPlan 20/20 modernisation plans, we are building on the foundations laid by the Government-sponsored Thameslink Programme to increase capacity and reliability on Thameslink, Southern and Great Northern – Britain’s most congested railway. This incorporates modernised infrastructure, trains and technology and working practices.”

“The ambitious £7bn Thameslink programme – sponsored by this Government – is delivering extensive infrastructure enhancements, new trains and a new timetable to tackle one of the busiest and most congested parts of the rail network. From May this will result in thousands more passengers experiencing faster, more frequent and more reliable journeys across London and the South East.”

Simon Blanchflower, Network Rail’s Thameslink Programme Director, said: “Opening the tunnels for passenger trains between the East Coast Mainline and Thameslink at St Pancras International is a great achievement. It marks the final major infrastructure piece in the jigsaw that opens up the full future Thameslink network and its north south travel opportunities across London.”

Six trains are now carrying passengers for the first time on new Thameslink routes across central London: 2 between Cambridge and Brighton (1 in each direction) and 4 between Peterborough and Horsham (2 in each direction). These are preview services, being used to prove the route ahead of a full service to be introduced in May. They run through the Canal Tunnels that link the East Coast Mainline with Thameslink at St Pancras International.

New trains and services, creating capacity for approximately 40,000 more passengers from May this year in each three hour peak to London from Kent, Sussex, Surrey, Bedfordshire, Hertfordshire, Cambridgeshire and Peterborough combined, rising to 60,000 in 2019

The new service, from May 2018, will progressively create new direct Thameslink routes through London between:

‒Cambridge and Brighton (via Gatwick)

‒Horsham and Peterborough (via Gatwick)

‒Cambridge and Maidstone East (with some extensions to Ashford International)

‒Littlehampton and Bedford (via Gatwick)

Thameslink trains will run from 80 more stations (140 in total) so passengers will no longer have to change if they are travelling to St Pancras International, Farringdon, City Thameslink and Blackfriars in central London. The majority of this improved service starts this May

The expanded Thameslink network means fewer passengers will need to switch to the Tube to complete their journey, saving time on their daily commute 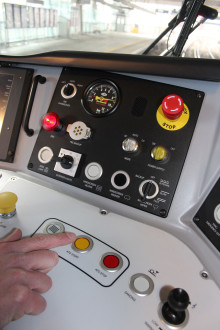 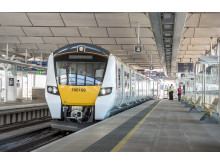 New Thameslink train at B... 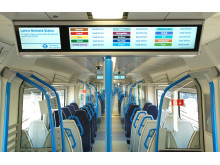 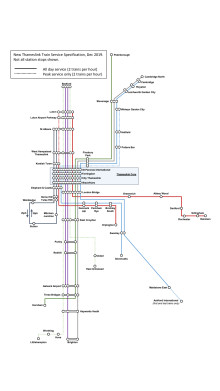