Govia Thameslink Railway (GTR) has listened to residents’ and traders’ concerns about the temporary closure of Cambridge’s Mill Road Bridge next year, and promised to install a temporary footbridge and move its work to the summer.

A £30 million expansion of the railway depot requires modification of one of the bridge's arches to allow an additional rail track to run underneath.

The upgrade, part of the government-sponsored £7 billion Thameslink Programme, will help increase the number of Thameslink services to and from the City from as far afield as Brighton and Gatwick Airport, boosting the local economy.

Kevin Parker, from GTR, who attended the public meeting with Network Rail and the construction firm Spencer’s, said: “This work is necessary and unavoidable but we care very much about the impact it will have on residents and traders which is why we have altered our plans.

“We will now install a footbridge for both pedestrians and cyclists to use during the work. There will still be occasions when we have to close this bridge for safety because of cranes moving overhead but we will keep this to a minimum.

“We are also moving the work to July and August as people suggested, although the dates have yet to be finalised. They said this was a less busy time of the year. Unfortunately, we cannot truncate the work, which was another request; it has to take eight weeks.”

Cyclists will have to dismount to cross the footbridge to ensure the safety of pedestrians but it will save them a huge amount of time if they had to follow the traffic diversion.

GTR shared the news on Thursday with Cambridge MP Daniel Zeichner who said: “I am pleased that GTR have responded positively to the very real concerns raised by residents, councillors and traders.”

The MP continued: “The work is important, because it allows vital developments on the much-needed Chisholm Trail to be done at the same time, and will provide extra trains for services to and from London.

“Disruption is always unwelcome, but by ensuring that cyclists and pedestrians can continue to cross the bridge, and providing good public transport alternatives, I am hopeful that this will work for everyone, and allow people to try out a traffic-free Mill Road for a few summer weeks.” 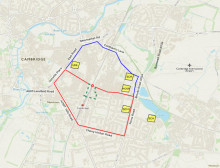 One week to go before Mill Road Bridge closure