Life-saving heart restarters have been fitted to over 50 stations across Sussex through a partnership between The Sussex Heart Charity (SHC) and Southern, owned and operated by Govia Thameslink Railway.

SHC first launched the programme two years ago as part of its 30th anniversary celebrations and has invested £100,000 in the programme.

The Rt Hon Amber Rudd MP helped celebrate the installation of one of the latest at Rye station today (Friday, 16 March) and heard that, by the summer, there will be an automated external defibrillator (AED) at either every station in the county and border towns or in the local community nearby.

Cardiac patient Steve Morris, whose life was saved by an AED, showed how easy the device is to use in a demonstration in Rye Station waiting room. SHC provided funding for his training and equipment to become a qualified Community Resuscitation Trainer. (Steve’s story about how his life was saved is attached below)

Govia Thameslink Railway Chief Operating Officer Nick Brown said: “This is a fantastic partnership that has the potential to save lives right across the county. Our railways are at the heart of our communities and it’s only right that they have the machinery to aid the hearts of an unfortunate passenger who may suffer a heart attack.”

Dr Rachael James, Consultant Cardiologist and Volunteer Co-Chair of The Sussex Heart Charity said: “It is essential that defibrillation be administered as soon as possible following the cardiac arrest. If the heart does not return to a regular rhythm within 5-7 minutes, this fibrillation could be fatal. That is why fitting AEDs close by where they may be most needed is so helpful. Providing some form or basic life support (CPR), especially if performed in the first few minutes of cardiac arrest, can double or triple a person's chance of survival.”

Amber Rudd, MP for Hastings and Rye, said: “I am delighted to have attended the launch of Sussex Heart Charity’s defibrillator campaign at Rye Station. The charity are doing fantastic work to install automated external defibrillators in train stations throughout Sussex. It is such an important initiative that could help save lives in our towns and I am pleased Rye station has become a part of it.”

The charity has provided the equipment, while GTR teams carried out the installation. The defibrillators are placed on the station where they can be reached by anyone from the village or town they are based in, meaning they can benefit the entire community and not just passengers on board Southern, Gatwick Express and Thameslink stations.

The defibrillators, which can restart a heart that has stopped or is beating arrhythmically due to a cardiac arrest or other condition, are automatic and provide step-by-step voice prompts so they can be used by anyone.

Terry Ayres, Chief Executive Officer at the Sussex Heart Charity, said: “Projects such as this highlight the value of supporting local charities. We are really grateful to the people of Sussex who take part in our annual sponsored walk – attend our events throughout the year and support us through monthly giving and volunteering - enabling us to develop projects such as this that have a direct impact on them locally.”

Jason Palmer, Volunteer Director and Vice Chair of The Board of Trustees, said: “I am eternally grateful to our former Chair and Director, Andy Forsyth, for having the faith in me to step up to Vice Chair and taking this project forward under the joint chairmanship of Consultant Cardiologist, Dr Rachel James and Cardiothoracic Surgeon, Mike Lewis.

“This was an initial idea of Ruth Forsyth as part of our 30th anniversary celebrations, a former director and board member of The Sussex Heart Charity, who suggested investigating the possibility of installing a defibrillator at her local Railway Station at Haywards Heath. My former career working for the railway and later central Government, enabled me to be well placed to renew industry and civil service friendships and develop one AED installation at Haywards Heath Station into a countywide project – covering all Sussex railway stations and probably a world first!”

Sudden cardiac arrest happens to approximately 30,000 people every year in the UK, and can strike anyone, at anytime, anywhere, without warning. The Sussex Heart Charity is an independent charity which supports care of the heart throughout Sussex.

If defibrillated within the first minute of collapse, the victim's chances of survival are close to 90 per cent. For every minute that defibrillation is delayed, survival decreases by 10 per cent. If it is delayed by more than 9 minutes, the chance of survival in adults is less than 5 per cent. It is important for bystanders who witness the collapse of a Sudden Cardiac Arrest victim to act quickly. If a person does not need the shock of an AED, the machine will not deliver a shock. It is not possible to hurt someone with an AED; they can only be used to save someone’s life. These defibrillators will ensure that, should any of passengers suffer a cardiac arrest within the vicinity of one of these AEDs, station staff or fellow passengers will be able to administer lifesaving actions before the ambulance arrives.

Since 1987 The Sussex Heart Charity has promoted excellence in cardiac related care, funding the purchase of equipment, education and research, supporting the cardiac rehabilitation service for those with heart disease and promoting resuscitation in the Sussex community. The Sussex Heart Charity (www.sussexheartcharity.org) raises funds within the County of Sussex for the county of Sussex. 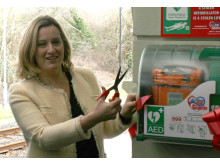 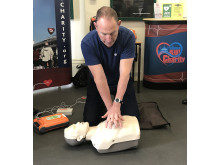 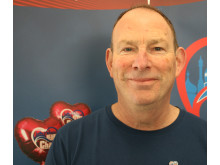 Steve Morris is a qualified trainer in CPR 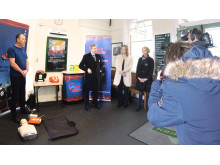 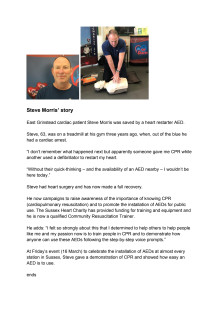 This accompanies a press release issued on 16 March 2018