Passengers using platforms 2 and 3 at Tulse Hill station will be able to enjoy the shelter of a long-awaited new canopy from this summer.

Construction started last weekend [8 and 9 February] with the installation of the canopy’s steel pillars, each three metres high and weighing three-quarters of a tonne. Govia Thameslink Railway’s contractors had planned put in all seven pillars over the weekend but the arrival of Storm Ciara on the Sunday meant that only four could be completed.

To minimise disruption to station users, the new roof was originally scheduled to be lifted into place during a weekend in the summer, when GTR are next able to close the station for a period long enough to complete the project. The remaining three support pillars will be erected by then, so completion will not be delayed.

The roof sections will be delivered by crane a few weeks in advance. The canopy will be 56 metres long and its modular design means that it can be extended in future.

The existing shelter dates from British Rail days and has already been partially dismantled because of its ageing condition and its out-dated design, which took up more platform space than necessary and obscured the view of information screens.

So that passengers will still have some weather protection while the new canopy is built, the remaining old sections will not be removed until the new roof has been put in place above them.

Paul Best, Govia Thameslink Railway’s Senior Project Manager, said: “I’m very happy to see work start on this much-needed improvement for passengers. Although the severe weather stopped us doing all the work we had planned over the weekend, it hasn’t delayed the complete project. It’s too big a job to be done in one 52-hour weekend shift, which is the longest we could interrupt train services at the station, so we were always going to wait for the next available full weekend, in the summer, to put the new roof on.

“We’ll then assemble the roof sections on the platform and lift them into position above the existing canopy. After that it will take about four weeks to gradually move all the cabling from the old canopy onto the new one, and then carefully demolish the old structure. We will only do this work overnight and at weekends, but there might be some minor disruption for passengers, so we apologise in advance for any inconvenience.”

Tulse Hill station was opened in 1868 by the London, Brighton and South Coast Railway on their line from London Bridge, and the company’s line to Streatham and Wimbledon opened in 1871. Services from Holborn Viaduct, run by the London, Chatham and Dover Railway, were introduced in 1869.

When it opened in 1868, the station had an arched iron and glass roof covering all four platforms. It is believed that this was demolished and replaced with individual platform canopies as a precaution following the collapse of a similar roof at Charing Cross in 1905.

These Edwardian canopies were built without foundations, so their supports gradually subsided. The last surviving one was replaced by British Rail in the 1990s.

The station is now used by around 2.3 million passengers per year. 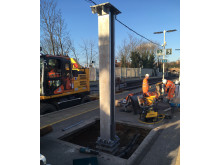 One of four pillars installed in February 2020 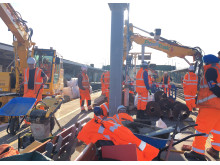