At Yamaha Motor, we employ a “theoretical-value-based production” system at our factories that analyzes every factor and work process involved in manufacturing our products. This is to systematically reduce wasted actions, eliminate inefficient steps, etc., and maximize the efficiency of work deemed to have true value.

However, if the people actually performing the work don’t fully understand the reasoning behind the system, getting suggestions for further enhancement becomes a challenge. This reality triggered a search for ways to not simply “study” the concept, but to grasp its essence with a more fun and friendly learning experience to help those on the factory floor understand its benefits and effects firsthand.

In this issue, we introduce a unique learning method using jigsaw puzzles that some of our employees came up with when we had each workplace set to work to try and find a solution to this dilemma. 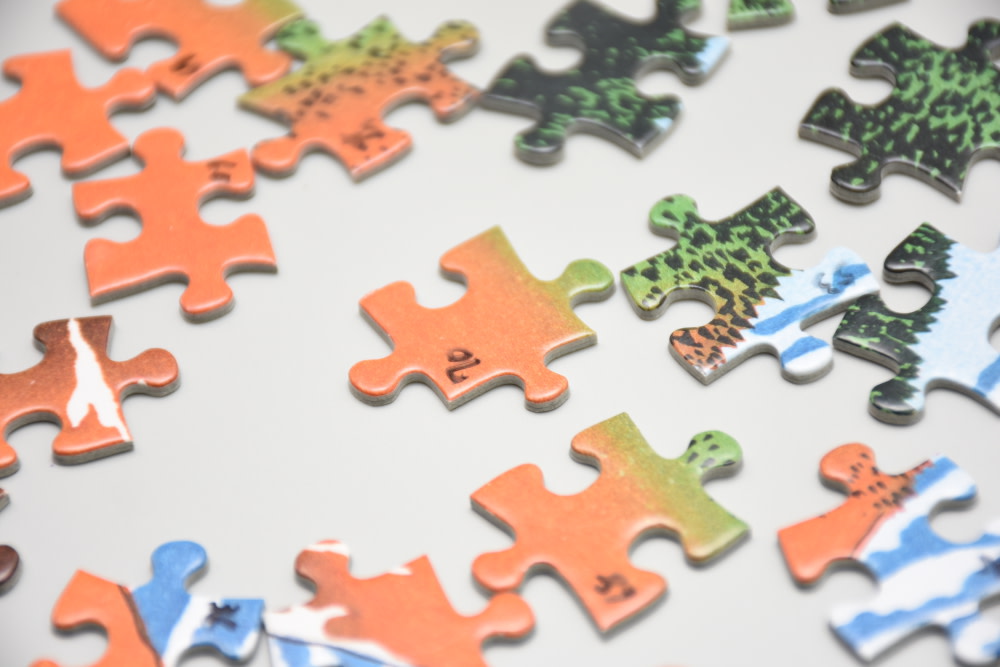 Assigning numbers to each piece minimized the time spent searching.

The steady tempo of hands piecing together a 108-piece jigsaw puzzle and seeing the picture of a Red Fuji—when Japan’s iconic peak is lit by the rays of the morning sun—come together was reminiscent of the assembly process on a factory production line. What’s more, the puzzle was completed in just one minute! It was the achievement of the ultimate target the team had worked over the course of a year trying to reach.
This scene took place at Yamaha’s Iwata South Factory. Beginning last year, the members of Production Department 4 primarily responsible for machining outboard motor parts would get together twice a month to have some fun but still seriously tackle assembling a jigsaw puzzle as fast and efficiently as possible. At first, it had taken them roughly 50 minutes to put the puzzle together, but as they became more proficient and made improvements to exemplify the theoretical-value-based production concept, they achieved an astonishing 98% improvement in efficiency.
For over 50 years, Yamaha’s production sites have been running the Improvement of Personal Capacity (IPC) program, a friendly and inclusive initiative imbedded in our corporate culture. By sticking to running small group activities that set things apart from day-to-day duties, this traditional Yamaha program has sought to help make our workplaces more comfortable and friendly to work in while encouraging improvement in individual skills and organizational strength.
The members of Section 2 in Production Department 4 chose Applying Theoretical Value to Jigsaw Puzzles as their theme for the IPC program, and their diligent work and ultimate success were recognized at the 2019 Companywide IPC Awards Ceremony, where they were bestowed the top award from among 333 other Yamaha teams.

Standardizing the Process with 127 Improvements 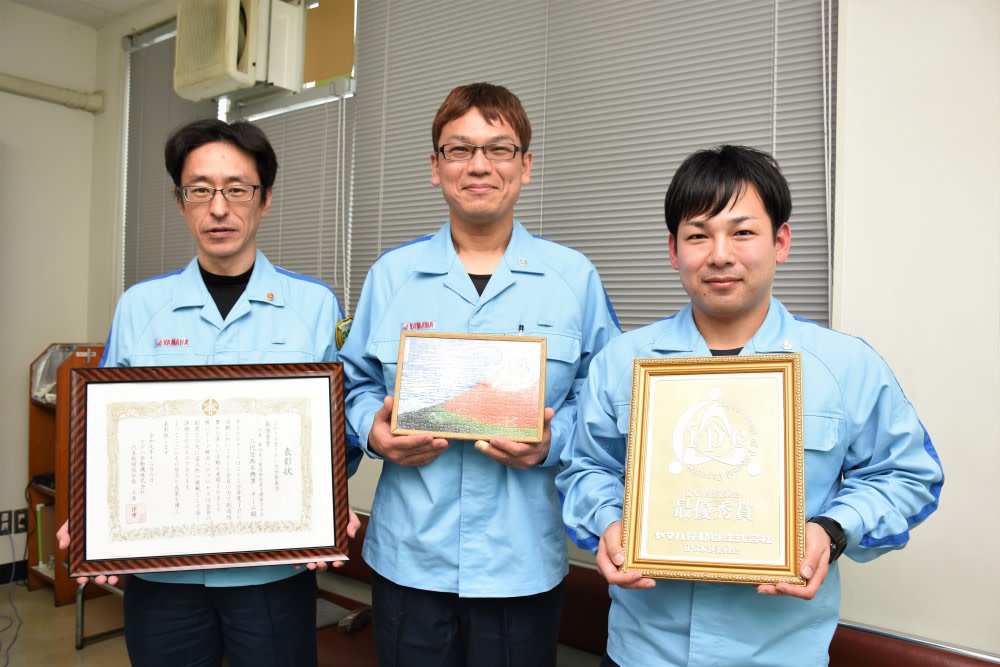 Theoretical-value-based production is a methodology aimed at raising production efficiency by dividing all of the tasks involved in the manufacturing process into those with “Value” and those with “No Value,” and then working to raise the ratio of tasks with Value as much as possible. Systematic efforts to increase efficiency at Yamaha Motor factories based on this approach are currently underway.
“However, when we surveyed employee understanding of theoretical-value-based production, we found that the actual workers on the line didn’t have as much understanding of the concept compared to the supervisors and group leaders,” says factory General Supervisor Hirofumi Jinnai. “So, we sought ways to give them a real understanding of it while having fun at the same time, and decided to use the concept to try and assemble a jigsaw puzzle as fast as possible as part of the IPC program.”
When the project actually got underway, a variety of initial issues were identified, e.g., time spent thinking with the hands stopped is of No Value, each person was working in their own way and repeating the same actions was wasteful. So, over the course of multiple discussions, the team narrowed down the assembly steps for more efficiency. For example, one of the methods they came up with was dividing the jigsaw puzzle pieces into types by the number of tabs and blanks they had, like 1 tab, 3 blanks or 4 tabs, 0 blanks. They also found that instead of having two people working individually to find and put together pieces, the work went faster if two people worked as a team and divided the work into coupling two pieces together like in the title photo. In the process of devising the final standardization of the work steps, a total of 127 suggestions for improvement were made—the sum total leading to achieving the goal.
“Not long after our IPC project ended, we had 38 improvement proposals based on theoretical-value-based production filed by workers on the factory floors and we’ve finished implementing them as well,” says Jinnai. “This really convinced us that through the jigsaw puzzle project, there was indeed a real jump in understanding of theoretical-value-based production.” 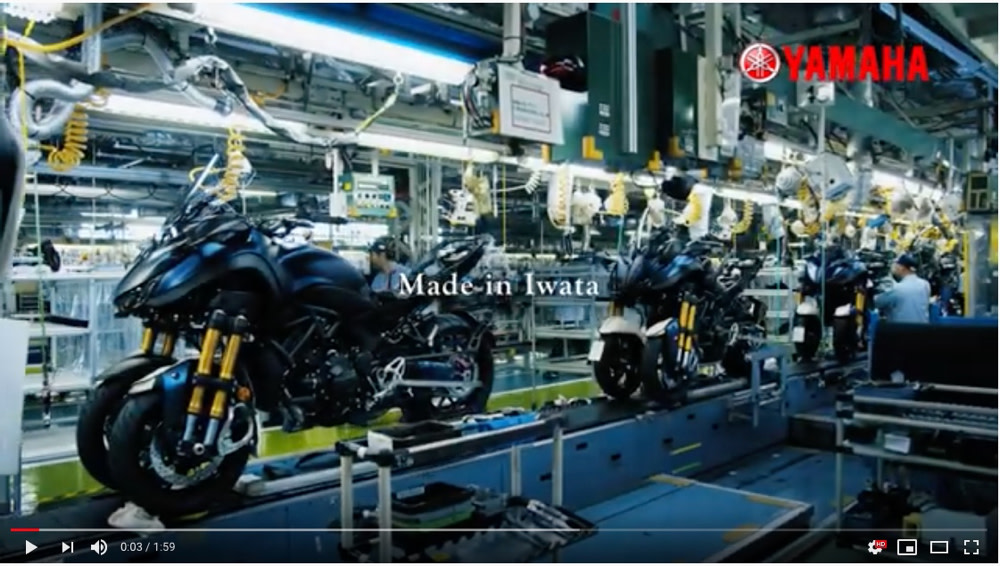 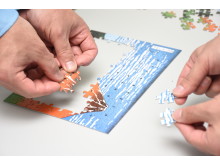 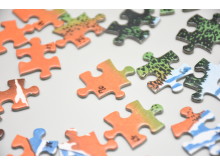 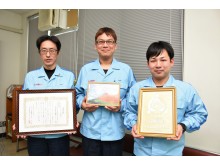