Growing at a continuous and phenomenal rate

Except for the global financial crisis (2008-2009-ish), which caused temporary dips in earnings (EBIT), DSV has fared very well and managed to deliver on the promise of continuous growth – and not just as a result of tailwind in the market and currency gains:

It comes down to a strong strategic focus on actively pursuing profitable growth through a balanced ‘above the market organic growth’ and ‘an active acquisition approach’.

The 10,000% has not been adjusted for inflation across regions and countries, and it’s impossible to accurately discern organic from non-organic growth. Nevertheless, it is evidence of a continuous and pretty phenomenal growth rate. 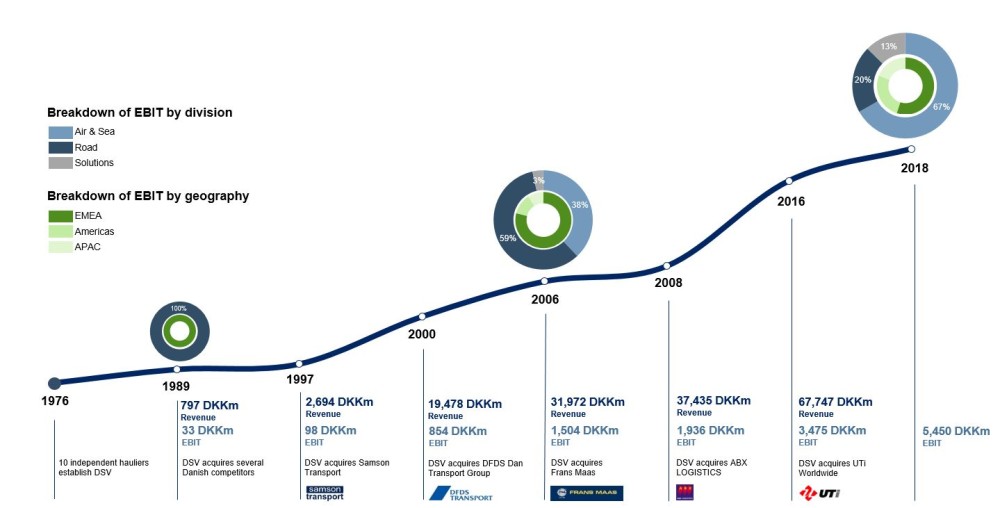 If we look at number of employees in the same period, incidentally, DSV has also grown its global staff by around 10,000%.

The biggest jump (in numbers) came in January 2016 with the acquisition of UTi Worldwide, which immediately added 21,000 employees to DSV’s existing 23,000.

A quick look through DSV’s various annual reports reveals that 2016 was not the only year DSV doubled the number of employees. This exercise has been performed multiple times, in the beginning quite easily, because the total number of employees was only approximately 200 (1989).

But much bolder moves lay ahead, most prominently with the acquisition of DFDS Dantransport (2000), which sextupled (x6) DSV’s size both on turnover and employees.

The acquisition of DFDS Dantransport sent DSV into the big league and paved the way for further international acquisitions in 2006 (Frans Maas), 2008 (ABX logistics), 2016 (UTi) and the next big step: Panalpina (expected Q3 2019). 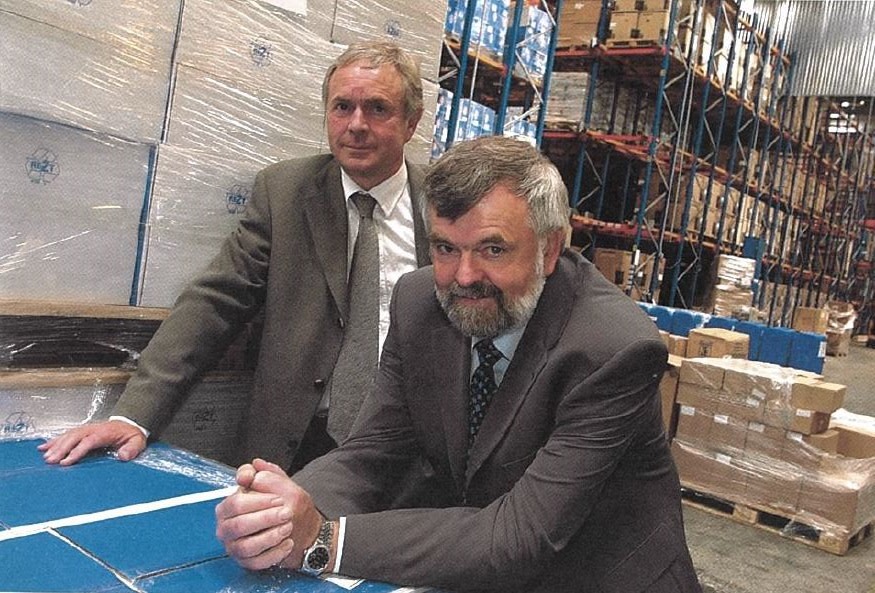 Chairman of the Board Kurt Larsen (left) with co-Founder and former CEO Leif Tullberg 2002. Photo is from the book The Transport Giant - the story of DSV by Lorents B. Rasmussen and John Aagaard, 2012.

In the book The Transport Giant – the story of DSV, Chairman of the Board Kurt K. Larsen comments on the acquisition of DFDS Dantransport with the words:

“I did my part [to secure a deal]… but I didn’t believe for a second that we could make it all the way through to an acquisition... Leif [Tullberg] was the one with the supernatural ability to persuade me: ‘we’re doing this, and we’re playing our cards right,’ he said. And then I thought, if I do what I need to do, then he’s got the rest…”

Increasing the value of DSV

These pivotal M&A combined with solid organic growth have secured DSV’s position as one of the largest and best performing transport and logistics companies in the world.

Over the years, we have also enjoyed the continued support of our shareholders, at home and internationally:

CEO Jens Bjørn Andersen comments: ”DSV is still as entrepreneurial as ever with an amazing team that continuously delivers on growth. I am so incredibly proud that we have been able to create so much value for all our stakeholders. It really is the most exciting journey”.

A history of mergers and acquisitions

DSV is a result of many mergers and acquisitions. Since DSV was founded in 1976, we have continuously acquired companies great and small, starting with small trucking companies and freight forwarders in the 1980’s.

Empowerment is the key word

Understanding the culture of DSV

The same ethical standards apply across the entire DSV Group

The DSV Code of Conduct sets out DSV’s ethical standards and applies to all employees. We have just issued an updated version that fully reflects our modern world.

How Danish is DSV? And does DSV live up to modern expectations of diversity?

Looking back on a long and very successful career, Kurt K. Larsen’s first comment is “yes, it really is quite unbelievable, and, you know, it might never have happened, if the chips hadn’t fallen exactly right”.
Kurt K. Larsen is referring to the acquisition and successful integration of Samson Transport in 1997, which was DSV’s first leap into the international freight forwarding world and the

DSV Panalpina’s values are my values