The Coronavirus (COVID-19) could expose existing shortcomings in employment arrangements and social protection in Europe, particularly for some workers in non-standard employment and vulnerable self-employed groups – who are more likely to be at risk of poverty and the impacts of economic shocks. Eurofound's new flagship report, Labour market change: Trends and policy approaches towards flexibilisation, shows that there has been an expansion in the proportion of workers in precarious forms of employment in several Member States in the decade following the 2008 financial crisis.

Eurofound’s new flagship report on labour market change looks at developments on the labour market in Europe during the decade prior to the outbreak of the COVID-19 pandemic. During the latter half of this period, the labour market experienced employment growth, increased demand for high-skilled labour, and an increased proportion of older people and women at work. The share of standard and non-standard employment on the labour market remained relatively stable during the entire period analysed. Eurofound’s research also shows that beneath this apparent stability there was a notable rise in precarity for those in non-standard employment, which includes part-time and temporary work. There was also a significant group of vulnerable self-employed workers, and platform work was noted as one of the drivers towards more precarious work arrangements. The rise in precarity led to deeper divisions between well-protected workers and those with limited access to social protection and employment rights.

Eurofound has also observed a relative hollowing out of the middle when it comes to employment: strongest job growth had been in high paid jobs, but employment also grew in low paid jobs. Precarity in some employment relationships has increased, with increases in the proportion of those with no contracts, a rise in temporary employment among younger workers, and a growing share of men on low hours part-time contracts. Eurofound has also noted an increase in 'compound non-standard employment' with those on a combination of different non-standard work statuses (e.g. temporary and part-time) – this increase has happened in almost all Member States. The COVID-19 crisis will put the resilience of these forms of contractual arrangements to the test.

Changing demographics on the labour market, and evolving employer-employee relationships, have influenced the composition of some forms of non-standard employment. For example, the increasing share of women in the labour market, combined with persisting patterns and societal expectations in caring roles, and also greater aspirations by mostly younger workers for more flexible working patterns, further encouraged an expansion of certain forms of non-standard work. Among policymakers, flexible forms of work have also been perceived as a way to assist certain disadvantaged labour market groups to access employment and provide a stepping stone towards standard employment. However, when conversion rates from temporary and part-time work to permanent, full-time employment are low, these stepping stones risk becoming their own form of labour market trap.

Speaking about the research, Juan Menéndez-Valdés, Eurofound Executive Director, said "From 2013 to 2018 most of Europe had moved towards economic recovery, with a marked increase in employment in all Member States. The COVID-19 crisis risks deepening fault lines in Europe's labour market and reversing trends of upward convergence. We must use this research to prioritise further interventions for workers in precarious work arrangements, help maintain employment as much as possible in the most affected sectors, and ensure adequate social protection for especially those in non-standard forms of employment. Attention must then immediately turn to job creation for those that have found themselves unemployed, to ensure that their skills and networks are retained and that they can play their full role in Europe’s recovery." 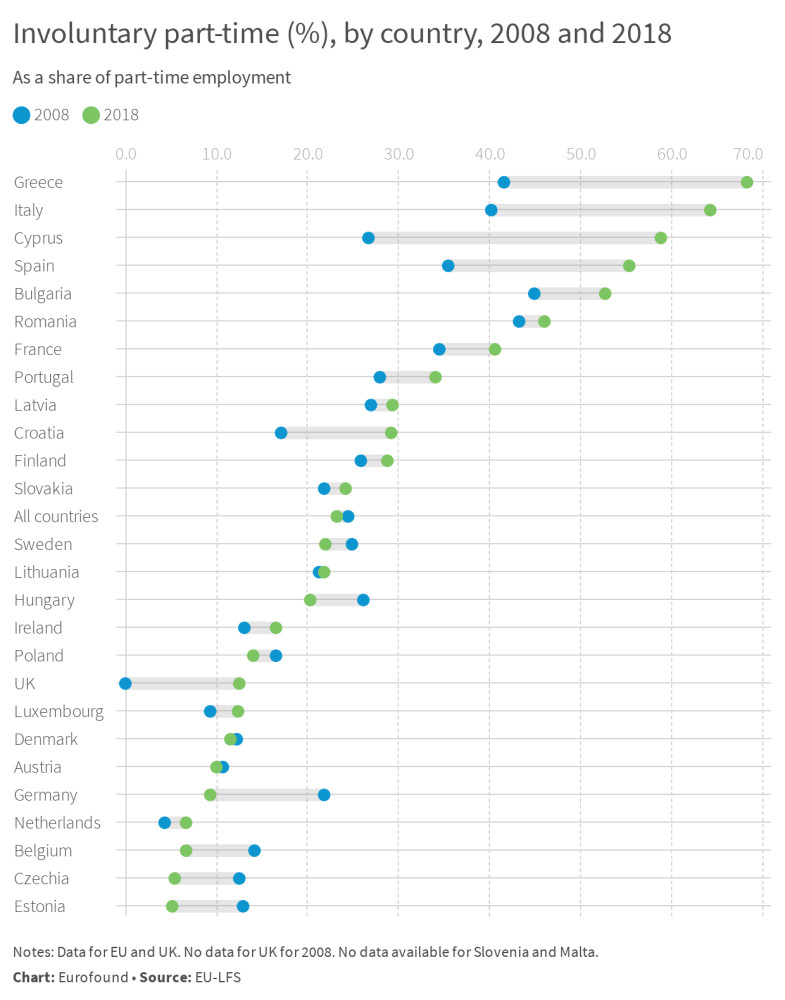 Involuntary part-time employment increased notably in Greece, Italy, Cyprus and Spain between 2008 and 2018. 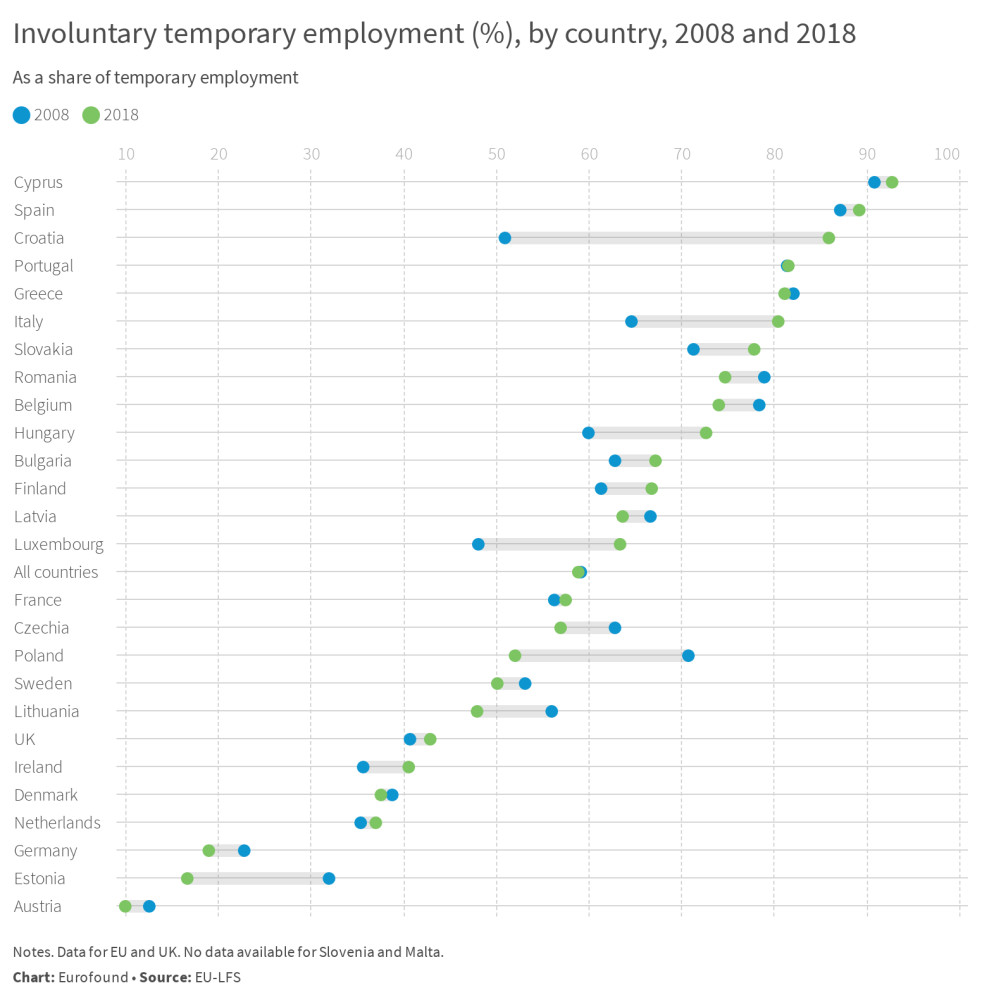 Involuntary temporary employment was stable in several Member States between 2008 and 2018, although relatively large proportional increases were observed in Croatia, Italy and Luxembourg, as well as reductions in Poland and Estonia.

The COVID-19 pandemic is having wide-ranging effects on people’s quality of life and work. Eurofound has launched a 10-minute e-survey to capture the most immediate changes and their impact. This is about you. Your life. Your work. Together we will help shape the response to this crisis. Click here to take part.

Eurofound research shows that the healthcare sector already has among the highest reported work intensity scores in Europe. COVID-19 risks not only exacerbating imbalance between sectors, but also creating a broader gender imbalance in work intensity on the labour market, as women are most represented in healthcare.

Eurofound's analysis of the 2016 European Quality of Life Survey shows that in many countries decline in trust in institutions was a temporary phenomenon during the recession that followed the 2008 financial crisis.

The high levels of resilience reported by the Netherlands may be of long-term benefit to the country as the outbreak of the Coronavirus (COVID-19) pandemic continues to present enormous social, economic and health challenges. The Netherlands reports the highest level of resilience across the EU, with just 17% of respondents reporting difficulty managing their lives when things go wrong.

The first results from Eurofound’s Living, working and COVID-19 online survey show a Europe grappling to respond to the crisis caused by the COVID-19 pandemic with many respondents reporting high levels of loneliness coupled with low levels of optimism about their future.

On Europe Day 2020, the EU institutions want to pay tribute through numerous online activities to the many Europeans who, in a spirit of solidarity, are helping our Union get through the coronavirus crisis.

Eurofound has this week launched COVID-19 EU PolicyWatch, a database collating and mapping the policy responses introduced in Member States, along with the UK and Norway, to alleviate the social and economic impact of COVID-19 restrictions.

Trust in Slovakian national government on a par with EU average during COVID-19 crisis.