Nei Ja
CUTS PLASTIC: One million plastic straws a year are among the single use plastic items that will be removed from all Hurtigruten ships. CEO Daniel Skjeldam and Hotel Manager Kristian Skar. Foto: ØRJAN BERTELSEN/Hurtigruten

As one the first major companies Hurtigruten bans all unnecessary single-use plastic. Already by July 2nd, everything from plastic straws, drink mixers, plastic cups, coffee lids and plastic bags will be removed from all Hurtigruten ships. The goal is to become the Wolds first plastic free shipping company.

- At Hurtigruten, we have focused on the problem with plastic pollution for years. There is a lot of talk about the impact plastic has on our oceans. But it’s time to take action. By getting rid of single use plastic on board all ships already by this summer, we will hopefully get others to follow. It is possible to act now, and the oceans does not deserve more hesitation, Hurtigruten CEO Daniel Skjeldam says.

Hurtigruten is the world leader in exploration travel, and the world’s biggest expedition cruise line. Their message is crystal-clear: All unnecessary single-use plastic will be removed company-wide by July 2nd.

This means that plastic straws are replaced by metal straws, stir pins will no longer be used – the same with plastic cups wrapped in plastic, plastic cutlery, plastic bags, plastic lids on coffee cups, plastic toothpicks, plastic aprons, single-use packaging of butter and all other single-use plastic items that Hurtigruten’s 400.000 guests and 2500 employees encounter on a day to day basis.

- Every year, Hurtigruten guests and employees cleans tons of plastic from beaches in the areas we operate. We witness the plastic pollution problem on a daily basis, and need to take action. Operating in pristine areas as we do, comes with a responsibility, Skjeldam says.

Mind-boggling 15 metric tons of plastic ends up in the world's oceans every minute of the day. If the trend continues, this number will double in the next 10 years. This means that by 2050 there will be more plastic than fish in the oceans.

- We carry a responsibility

- Plastic pollution is the single biggest threat to our oceans. Hurtigruten operates in some of the most vulnerable areas in the world. This means that we carry a special responsibility to protect these areas for the local population and future generations of explorers, Skjeldam says.

Hurtigruten’s single use plastics ban will be effective across its entire fleet of custom build expedition vessels – both operating on the legendary Norwegian Coastal Route, as well as expedition cruises from pole to pole.

The single-use plastic ban will also be imposed on the hotels, restaurants and other establishments of Hurtigruten’s land based operations on Svalbard, operated by its fully owned subsidiary Hurtigruten Svalbard.

In addition to the internal plastic ban, Hurtigruten is challenging all its suppliers to reduce and cut the use of plastic.

- No one can win the war on plastic alone without allies. This is why we implement high demands on our suppliers. Our goal is to become the world’s first plastic free first shipping company. This is our first step, Skjeldam says.

Hurtigruten’s single use plastic ban comes just days after announcing the largest environmental upgrade in the company’s 125 years of history. Up to nine of Hurtigruten’s ships will be retrofitted to LNG- and battery propulsion.

Hurtigruten's ships operating on the Norwegian coast will also be readied for shore power. 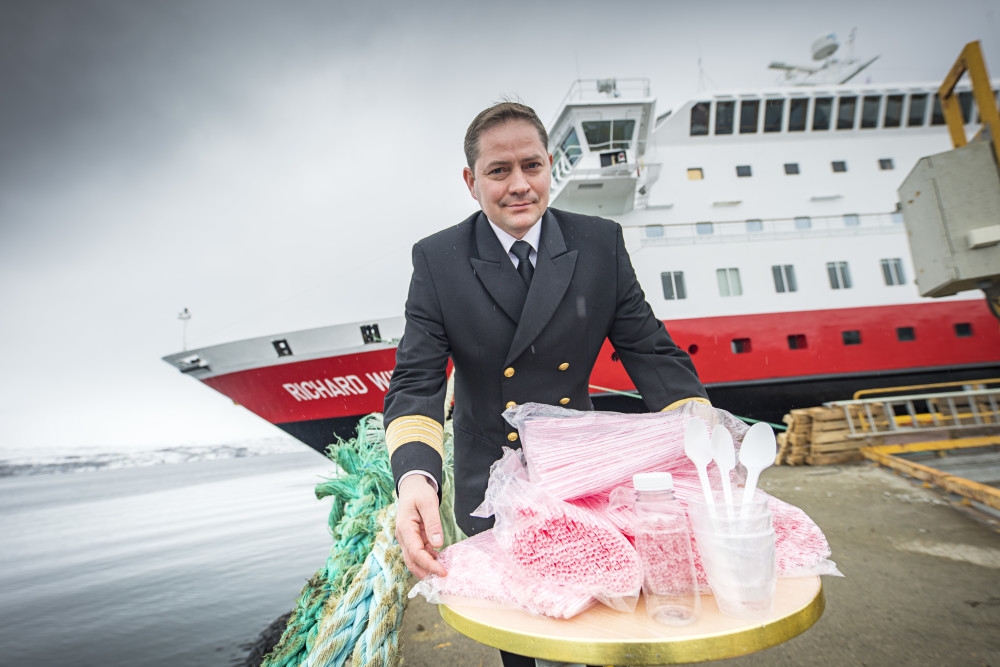 Hurtigruten and the environment

Being World leader in exploration travel comes with a responsibility. Sustainability is the core of every part of the Hurtigruten operation.

Hurtigruten is advocating a ban on Heavy fuel oil and stricter regulations on pristine destinations. Hurtigruten is involved in research, fights pollution and funds local and global projects through Hurtigruten foundation.

Hurtigruten aim to educate guests, and create ambassadors for every destination on every voyage.

With the introduction of the world’s first battery hybrid powered expedition ships – and the conversion of up to nine existing ships to hybrid LNG-battery power - Hurtigruten sets a new standard with the next generation of adventure travel.

By summer of 2018, Hurtigruten will ban all unnecessary single use plastic – as the first cruise line in the world. From straws to drinking glasses and plastic bags, everything will be removed or replaced by environmentally friendly alternatives made of paper, biodegradable material and sustainable materials.

​Extreme makeover for Hurtigruten favorite: MS Richard With to emerge as brand new

More comfort, new technology and better views of the spectacular Norwegian coast. The single largest upgrade project in Hurtigruten’s history will see the MS Richard With emerge as a brand new ship.

Cutaways from fisheries and other organic waste will soon be used to power Hurtigruten’s fleet of green cruise ships.

Hurtigruten is expanding the world’s greenest and most extensive expedition cruise program with a number of new and unique destinations. From 2020, Hurtigruten guests can explore the Alaskan wilderness on board the brand-new and hybrid powered MS Roald Amundsen.

​At the age of 17, he started his career as a Hurtigruten galley assistant. 37 years later, Kai Albrigtsen (54) will take command of the world’s first hybrid powered cruise ship.