Equinor, operator of Dudgeon offshore wind farm, has presented those aboard the ESVAGT Njord vessel with a Safety Award, to honour their life-saving actions in the rescue of seven fishermen.

The Esvagt Njord is a Service Operations Vessel (SOV) servicing Dudgeon offshore wind farm off the Great Yarmouth coast. A bit like a floating hotel, with workshop and storage, the vessel is home for the teams of technicians as they stay offshore in the wind farm, two weeks at a time.

The incident occurred on 15 December 2020, when HM Coastguard received an emergency beacon alert from the fishing vessel GALWAD-Y-MOR and initiated a Search and Rescue response for those on-board. The crew had abandoned to their life-raft following a report of an explosion and the vessel taking on water.

The Esvagt Njord responded to the signal, utilising their fast rescue boat, and those onboard the Njord rescued all seven crew within 22 minutes of being notified. Having received immediate medical attention and further treatment at hospital, all seven males recovered well.

Pete Lowson, Offshore Energy Liaison Officer at HM Coastguard, said: “I would like to pass on my thanks to the crew of the Esvagt Njord for their support during this incident, particularly to the medic and those who treated the crew for their injuries. It is another example of the excellent resource which can be provided by the offshore renewables industry to support maritime search and rescue.” 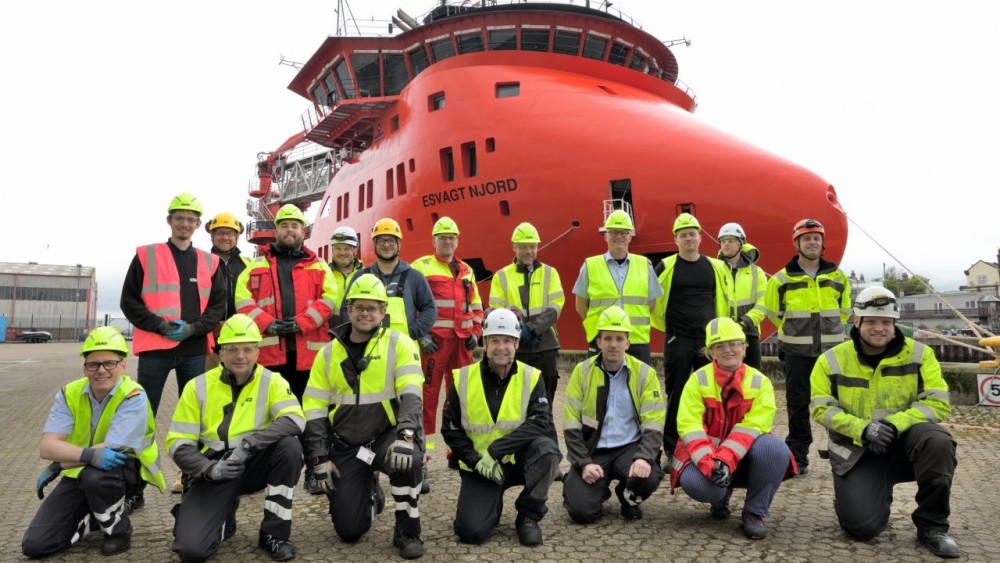 Equinor, which operates the wind farm, has awarded all employees and contractors involved in the rescue from the Dudgeon windfarm with a safety award to acknowledge their exemplary handling of the situation.

Sonja Chirico Indrebø, Plant Manager for Dudgeon offshore wind farm, said: “We wanted to present this Safety Award to recognise all involved, including the crews from Esvagt Njord and Green Storm, the International SOS paramedic, the coordinator, the warehouse operator and technicians, for their life-saving actions. With our operations out at sea, it’s incredibly important that both our technician teams and the vessel crews are highly trained to deal with any kind of incident that could happen whilst offshore. This rescue operation goes to show that a trained team, highly skilled in emergency response and first aid can also create a safer environment for other users of our oceans. It really is thanks to those onboard the Esvagt Njord at the time that this story has a happy ending.”

Since 1981, ESVAGT has rescued 148 people from a life-threatening situation at sea.

Kristian Ole Jakobsen, Deputy Chief Executive Officer in ESVAGT, said: “We are indeed very proud of our colleagues at Esvagt Njord, who clearly demonstrated ESVAGT’s vision of providing “Safety and Support at Sea” in the best way possible. “Safety remains the very essence of our core values, and we are very proud of this instant and highly professional performance by the colleagues and the team onboard Esvagt Njord, which ensured a positive outcome of this severe situation.”

Dr Louise Slaney, Medical Director Health Advisory Services and Medical Advisor to Equinor in the UK states: “International SOS would like to express their gratitude to our Medic and his first aid team for their life saving actions following this incident. It is thankfully very rare that our medics would have to deal with a Multiple Casualty Incident, but despite the chaos of the situation his training took hold and he achieved this seamlessly. He is a real credit to us and Equinor; not to mention the entire crew for responding so quickly to the Mayday.”

ESVAGT is a dedicated provider of safety and support at sea and services both the offshore wind industry as well as the oil & gas industry.

ESVAGT was founded in 1981 and has a fleet of more than 40 vessels and approximately 1100 employees offshore and onshore.

ESVAGT has been servicing the energy sector since 1981 and has set the standard for safety and support at sea. Today, the shipping company consists of 42 vessels and over 1,100 employees, and ESVAGT has just entered the growing American offshore wind energy market to play its part in the green transition.

Crowley, ESVAGT to Partner to Add Vessel and Service Capacity for the U.S. Offshore Wind Industry