No Yes
Esbjerg will be at sea on board the 'Esvagt Dana' through paintings by students from the School of Culture.

ESVAGT’s newest vessel has been decorated with Esbjerg-themed water colours painted by students from the School of Culture.

Esbjerg Performing Arts Centre, the water tower, the statue of King Christian IX on his horse and the sculpture of the four men and the sea, ‘Menneske ved Havet’, are among the local landmarks of Esbjerg that the crew and customers on board ESVAGT’s new vessel, the ‘Esvagt Dana’ can look forward to seeing every day at work.

‘This is the third time that ESVAGT has invited students from the School of Culture to decorate a newly built vessel and this time, Esbjerg is the theme. This has produced many good paintings’, says Tina Roloff, Reception Manager and responsible for decoration at ESVAGT:

‘We chose Esbjerg as the theme for the decoration – and because the students at the School of Culture were already working on the theme of Esbjerg’s 150-year celebration, it was a subject they were familiar with,’ she says. 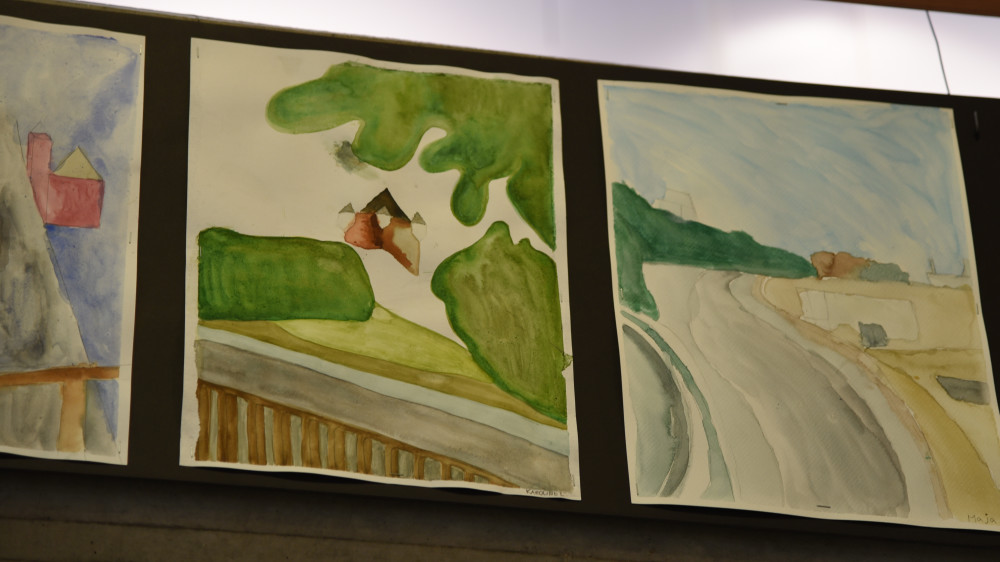 ‘Working together with the School of Culture, from where we receive many varying motives and many works, is an obvious choice. The vessels are large and need quite a lot of artwork – we are talking about more than 100 creations for vessels the size of the ‘Esvagt Dana’,’ says Tina Roloff.

The School of Culture is also happy with the partnership:

‘It means a great deal for the students to know that their pictures are going to be enjoyed by others. It motivates them and they are proud that their works are being bought,’ says Head of Visual Arts at Esbjerg’s School of Culture, Betina Trampedach:

‘The partnership also means that we have the funds to do something a little extra for the students. This year, for example, we are using the money to buy soapstone for sculptures,’ she says.

With the newbuilding ‘Esvagt Dana’, ESVAGT aims straight for the dynamic market for SOV vessels.

Creative collages on board the ‘Esvagt Albert Betz’

ESVAGT has commissioned the designer duo, Tex&Jack, to take on the interior design of the SOV new build ‘Esvagt Albert Betz’ for MHI Vestas.

The good vessel ‘Esvagt Mercator’ has pleased the Belgian Center for Guide Dogs by donating towards training of guide dogs.