No Yes
‘We are proud of being nominated. The Barents Sea always means harsh weather and challenging conditions, but with ESVAGT’s strong safety culture and unique boat competences, the operation was carried out without a single incident.'

Fine recognition of the ‘Esvagt Dana’

ESVAGT was nominated for the 2020 Safety Award for irreproachable diving operation in the Barents Sea together with Norwegian SubseaPartner.

Together with the Norwegian diving specialists SubseaPartner, ESVAGT has received great acknowledgement for a safe and irreproachable operation in the Barents Sea.

ESVAGT and SubseaPartner were nominated after their operation at the Goliat platform in the Barents Sea, where the ‘Esvagt Dana’ provided dive support to 40 divers on board. An assignment that requires great focus on safety and competent crew, as the operation takes place within Goliat’s safety zone. Vår Energi nominated ESVAGT and SubseaPartner to recognise the “efforts and results from the dive campaign”. 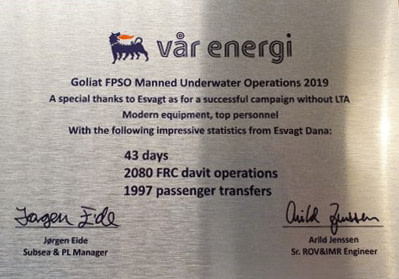 Over the span of the operation's 43 days, more than 2,000 FRC david operations and close to 1,997 personnel transfers were carried out. There were no personal injury nor near miss, and the operation was both very efficient and economical for the customer.

‘We are proud of being nominated. The Barents Sea always means harsh weather and challenging conditions, but with ESVAGT’s strong safety culture and unique boat competences, the operation was carried out without a single incident. It’s very nice to be recognised for’, says Jann Bach, the vessels’ captain.

In 2016, ESVAGT received the Eni Norway Safety Award for a rescue mission at the semi-submersible rig Scarabeo 8, when the crew from the ‘Esvagt Aurora’ successfully recovered a Scottish engineer from the water a dark February night. Eni Norway is now called Vår Energi.