No Yes
ESVAGT recently sold the 'Esvagt Supporter'. The vessel’s operation in the wind farm Belwind laid the foundations for the SOV concept that has made ESVAGT today’s market leader in servicing offshore wind turbine farms.

ESVAGT’s first wind vessel has retired but the legacy of the ‘Esvagt Supporter' lives on in the many SOV vessels in the shipping company.

The starting point for ESVAGT’s journey into the offshore wind energy industry in 2010 was ESVAGT’s capabilities within boat transfer and Vestas Offshore’s need for personnel transfer to offshore wind turbines.

The wind turbine manufacturer needed access to the turbines in the offshore wind farm Belwind in the Belgian sector, and at the same time, ESVAGT recognised the potential in expanding its capabilities in safe and efficient transfer of personnel to include the emerging offshore wind energy industry.

‘Using our extensive experience in working safely at sea in the offshore oil and gas industry as a starting point, we started working with then Vestas Offshore on the first tests of a service vessel at a wind farm in Horns Rev 1 in 2022’, says Ole Ditlev Nielsen, Stakeholder Liaison Manager at ESVAGT:

‘When the time came a few years later for Vestas Offshore to choose a logistical solution for Belwind in Belgium, they decided to test our SOV concept as an alternative to the usual Crew Transfer Vessels (CTV) solutions, and together we began sketching the outlines for developing the SOV concept that was to come,’ he says. 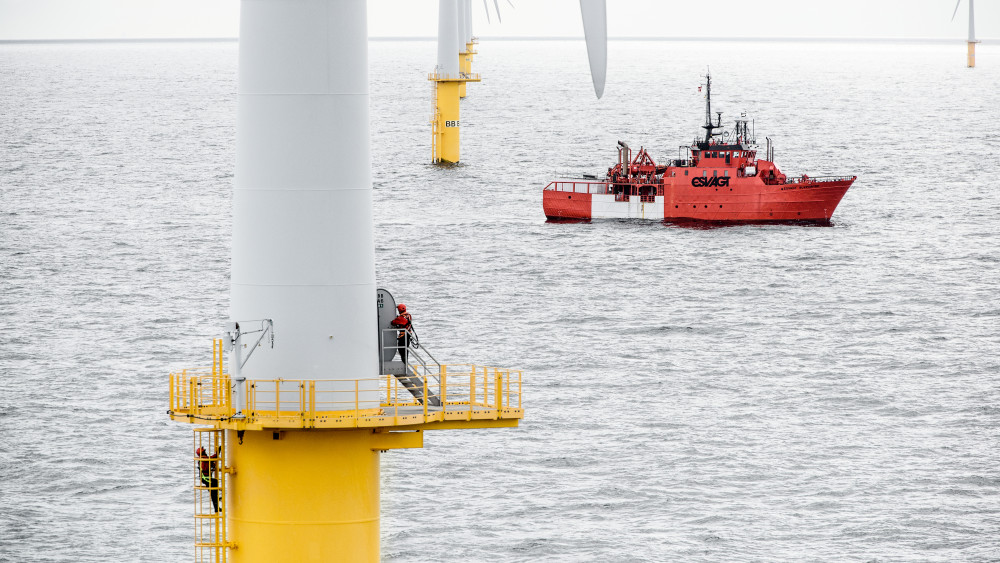 ESVAGT decided to retrofit the ‘Esvagt Supporter’ so that it could fulfil the functions they had defined together with the customer. The solution was based on transfers by boat.

‘It became the start of a strong and developing working cooperation. Belwind was the starting point for ESVAGT’s involvement in offshore wind and laid the foundations for the SOV concept that has made ESVAGT today’s market leader in servicing offshore wind turbine farms,” elaborates Ole Ditlev Nielsen.

At the beginning, offshore wind was both challenging and educational for ESVAGT. They developed and tested the concept for wind turbine transfers in Horns Rev 1, and Steffen Rudbech Nielsen, Head of Ship Management – Operations, remembers the time as a “steep learning curve”:

‘We tested transfers using our rescue boat that we of course had extensive experience with, but there is an enormous difference between saving a person from the water and transferring someone to a boat landing on a wind turbine. Not least because our boat design had been optimised for rescue missions,’ he says:

‘Transferring safely and efficiently was extremely demanding at first.’

ESVAGT developed a new boat stern with ‘lugs’ that could assist in the boat landing process and maintain the boat’s position, and the design of the boat was adapted to increase storage capacity and improve manoeuvrability. At the same time, experience was built up and shared, and training developed the skills of the crew:

‘We learned a lot about transferring to turbines, not least from the technicians we needed to transfer. The fitters and our boatmen formed an effective development team that worked together to find the optimal operation,’ says Steffen Rudbech Nielsen.

It is this concept that has now been further developed for the purpose-built transfer boat, the STB7, that ESVAGT uses today.

The legacy lives on

The vessel’s legacy is absolutely central for the ESVAGT of today and tomorrow:

‘We have five SOV vessels and four new ones on the way, and we have worked for most of the major operators and wind farm owners with an SOV concept that has set the standard for safe and efficient operations,’ says Ole Ditlev Nielsen:

‘The fact that we are leaders in the SOV area today is largely due to our ability to transfer experiences from the sea, our crew and our customers to the concepts that we develop. We are currently the only SOV operator that can deliver a new SOV with an experienced crew because we have transferred and shared almost ten years of experience within offshore wind,’ he adds:

‘There is a direct link from the ‘Esvagt Supporter’ to all the SOV vessels that we are currently building, where all our knowledge, capabilities and experience are built into their design and concept,’ says Ole Ditlev Nielsen.

MHI Vestas and ESVAGT enter into another SOV contract

Working closely with the customer results in high SOV efficiency

A shared crew: Good cooperation between ESVAGT and its customer maximises uptime and increases operating efficiency in offshore wind farms.

"The ESVAGT SOV is not just a taxi – it's a collaboration"

For Aart Bark, Regional Service Director at MHI Vestas, teaming up with ESVAGT in the Belwind1 and Nobelwind Parks is more than just engaging a service provider.

The SOV is the "swiss army knife" in offshore wind

Apache North Sea has extended its contract with the ‘Esvagt Observer,’ a standby vessel which has been servicing the Beryl field, 335 kilometres North East of Aberdeen, since 2004. The contract extension is for four years, with additional extension options of up to four years.

With the ‘Esvagt Albert Betz’, named in Eemshaven earlier today, ESVAGT solidifies its position as market leader on the SOV wind market. The vessel will service the wind farm Deutsche Bucht for MHI Vestas over the next 15 years.

Ready vessel: Despite both a lengthy corona shutdown and financial problems for the shipyard, ESVAGT’s SOV newbuilding 'Esvagt Schelde' is now ready to start working for Vestas at Borssele 3-4 and Northwester 2 wind farms.