Passengers, rail user group representatives and councillors have had their say on how a slice of £15million should be used to improve the rail experience for people in Crawley, Horsham and Horley.

MP Henry Smith welcomed ideas on how thousands of pounds should be spent on improving passengers’ rail experience in his constituency when he held a public meeting this month (14 June) at the Arora Hotel in Crawley.

Following disruption faced by passengers in the summer of 2018, the Secretary of State for Transport announced that Govia Thameslink Railway would contribute £15million towards a Passenger Benefit Fund, which would be used to provide tangible benefits to passengers.

The Secretary of State appointed three MPs to oversee the programme, Bim Afolami, Heidi Allen and Henry Smith – one for each of the routes affected in May 2018 - Great Northern, Thameslink and Southern.

The MPs recommended that decisions on how the fund is spent should be made at as local a level as possible, which is why an amount from the fund has been allocated to passengers at stations depending on how much the station was impacted by the May 2018 timetable introduction.

A number of ideas were discussed and these included water bottle refill schemes with counters to show how many times they have been used, the refurbishment of the underpass at Horley to prevent it from flooding and developing a second entrance at Horsham. Questions over how the fund fits in with the Crawley station redevelopment plans were also addressed.

GTR’s Patrick Ladbury said: “Some interesting ideas were put forward at the meeting. I would encourage as many people as possible to make their voices heard if they have suggestions for how the fund should be used. It is easy to get involved and submit your ideas. Just visit https://www.passengerbenefitfund.co.uk. Ideas need to be submitted by 31 July so that we can assess them and get started on the selected schemes as quickly as possible.” 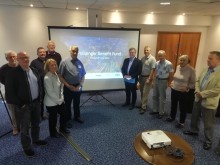