The life of a World War One war hero who pushed his flimsy biplane to the absolute limits to shoot down an enemy airship over British soil has been commemorated in the Hertfordshire village where it came crashing down in a ball of flames. 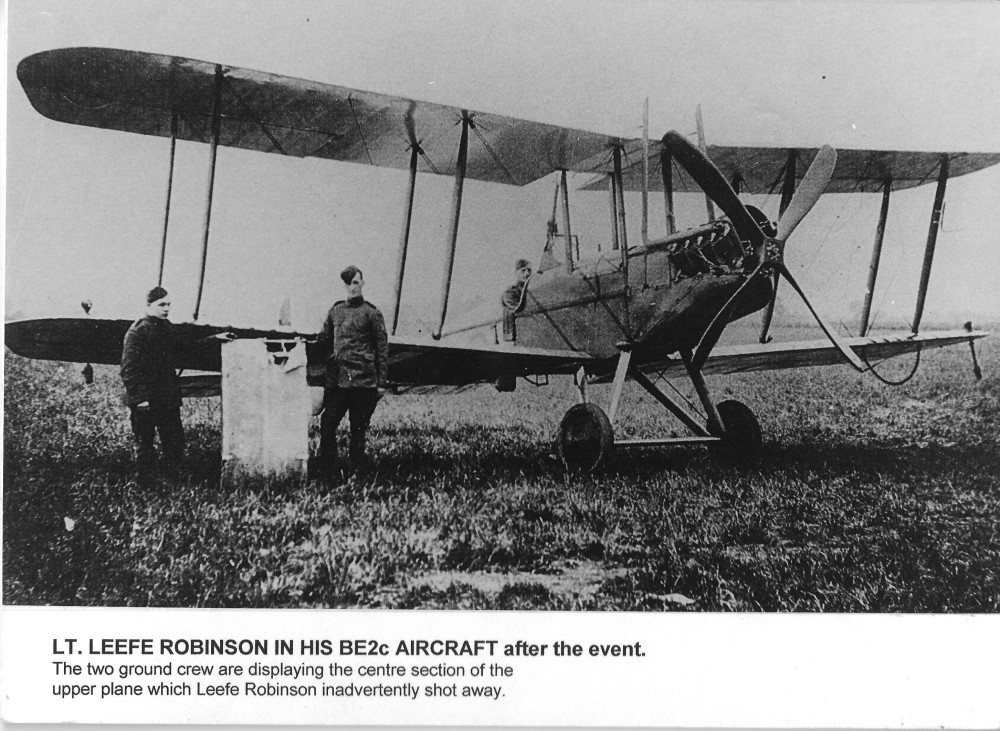 Govia Thameslink Railway managers and Cuffley parish councillors joined one of Capt William Leefe Robinson’s great nephews to unveil a plaque with his name at the village train station.

Leefe Robinson was the first pilot to shoot down a German airship in the First World War and the first to receive the Victoria Cross for action over British soil. The airships had been bombing London and the home counties with impunity and his action brought him instant celebrity and what is thought to have been the fastest-ever awarded VC.

It was on a damp and blacked-out night in the early hours of 3 September 1916, that 21-year-old Royal Flying Corps pilot Lieutenant (as he was then) William Leefe Robinson crouched in the cockpit of his frail fighter plane and attacked the giant German SL11 airship, 11,500ft above Cuffley. 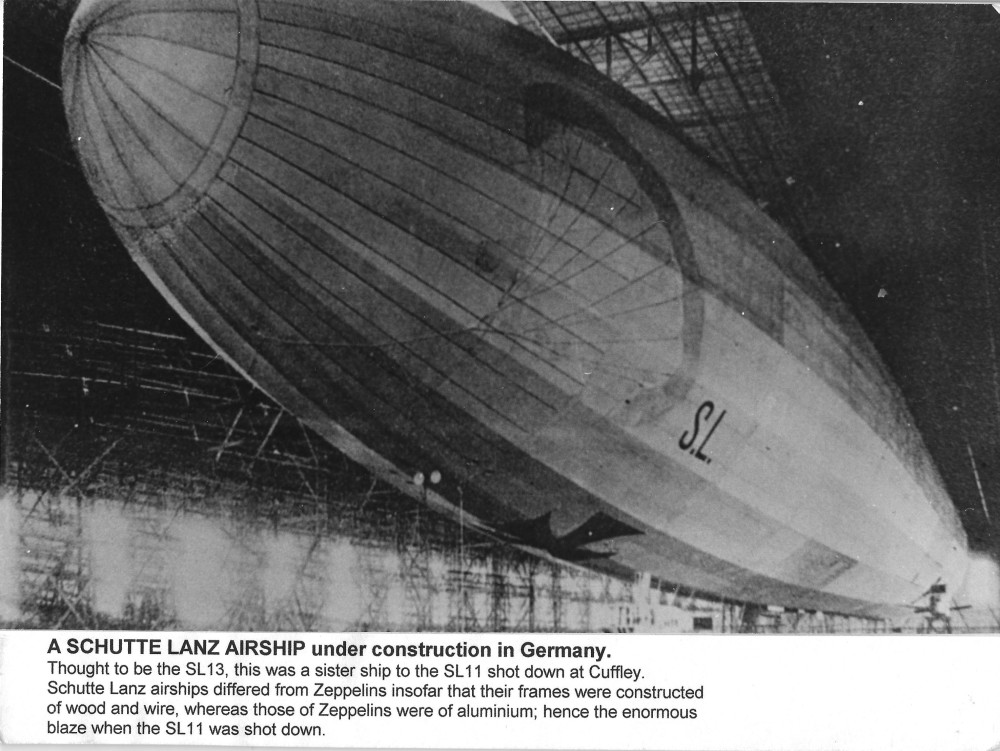 Despite coming under intensive machine-gun fire from the airship, Leefe Robinson made several close-range attacks, raking it with incendiary bullets from his single Lewis gun.

It was while firing his last drum of ammunition that he saw the monster airship, filled with highly-explosive hydrogen, burst into flames. According to reports, there was a blinding flash in the sky which could be seen from as far away as Cambridge and Surrey. 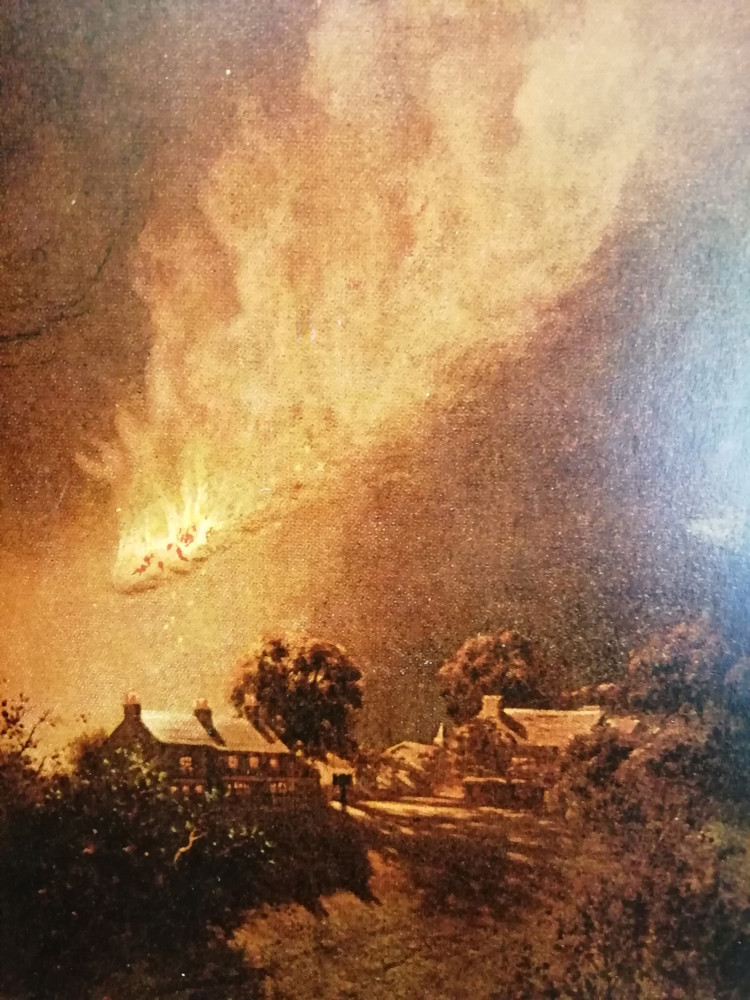 For the people of London and the Home Counties, who had been subjected to over a year of aerial bombardment, the shooting down of the airship was a tremendous boost to flagging spirits.

More than 10,000 flocked by rail to see the wreckage in Cuffley, many by train (see picture below). The pub ran out of food and beer in just a few hours. 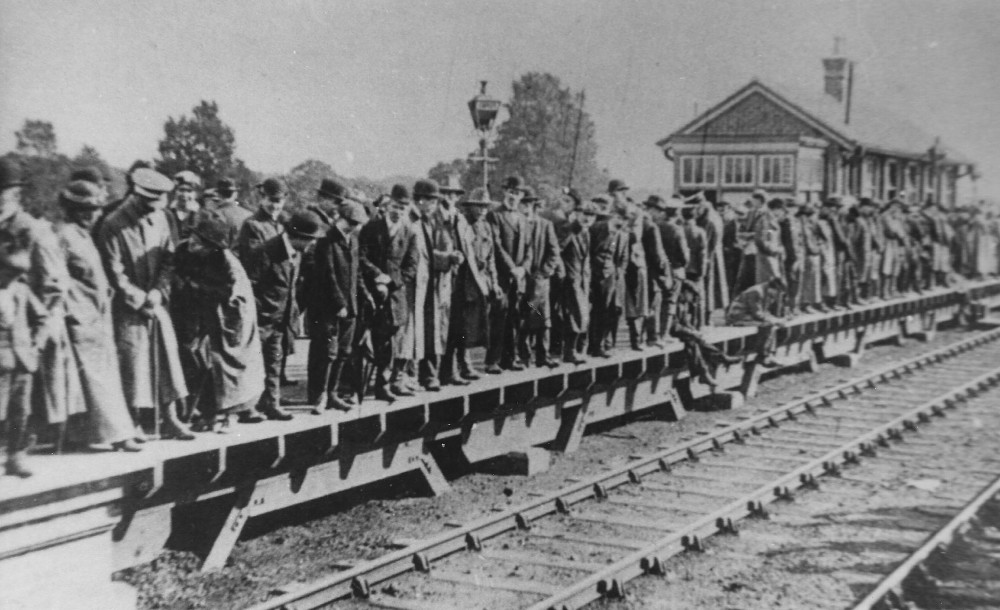 Two days later Leefe Robinson was awarded the Victoria Cross, thought to be the fastest on record and the first for action over British soil. He received it a few days later, on 9 September.

The plaque, unveiled at Cuffley Railway Station, replaces a nameplate that had been fixed to a Great Northern train which is being scrapped because these trains - the oldest electric trains in mainland Britain - are being replaced by a new fleet (see earlier press release).

One of Leefe Robinson's great nephews, Christopher Irwin, told the small crowd gathered that Billy, as Leefe Robinson was known, smeared his face with whale fat to protect him from frostbite as he endured -25C temperatures in the open cockpit of his frail biplane, climbing for an hour to 11,500ft to attack the airship.

The airship was massive said Mr Irwin – almost three times the length of the three-carriage train that has been bearing his nameplate.

Later in his life, said Mr Irwin, Leefe Robinson was shot down by the crack squadron led by Germany's war ace, Manfred von Richthofen, who was known as "the Red Baron", and he was taken prisoner. He made several daring escapes but didn't make it back home until Christmas 1918, after the war had ended. Tragically he contracted Spanish 'flu and died only a few days later, on 31 December 1918. He was honoured with a fly-past at his burial.

Mr Irwin added: "These Zeppelins were bombing people, and were known as baby killers. These were terror attacks like 7/7, so when Billy brought one down it was an amazing scene. I have heard they could see the fireball in Reigate. The airship had killed 16 people in the Edmonton area that night. After the war, nations came to realise that that sort of terrorist action was totally unacceptable.

"My family has always had mixed feelings about Billy's achievement. The Victoria Cross used to sit in a cabinet in the living room of my grandmother's bungalow in Dormansland. Our family admired his courage and his bravery but he was one of four close members of the family who died in that war and the pain went very, very deep. There could be no triumphalism. We were also aware that the crew of that airship died."

Steve White, Chief Operating Officer at GTR, told the gathered crowd at Cuffley Railway Station that GTR was making positive improvements to the Great Northern route with new trains, Oyster and Contactless payment extensions, refreshed stations in the south and a new platform for Stevenage in the north by Network Rail.

"But at the same time as building for the future, we need to recognise and remember our heritage, which is why this plaque at Cuffley station, put up in memory of Captain William Leefe Robinson VC, is so important. The nameplate has been running around the route on one of our older trains which will be retired shortly; now it is here on the wall of our station for posterity."

Cllr Peter Dace, of Northaw & Cuffley Parish Council, is an historical authority on Leefe Robinson. He recalled how, in 2010, the council celebrated the centenary of the railway coming to Cuffley. The nameplate now resides on the wall below this plaque. “Cuffley and the railway station were put on the map by this memorable event. It is arguably our only moment of history,” he said.

There are pictures of the event attached and historic pictures (attached) and Pathé newsreel video clips here of Captain Leefe Robinson: https://www.britishpathe.com/workspaces/3bceee7e220b60f12a144d7dae61e90f/2PVT6NeF; the contact for this is: