Thameslink is introducing two additional through-London services every hour between Peterborough and Horsham on Saturdays, from 21 December. These will increase the number of direct services to St Pancras International station, central London and Gatwick Airport, helping passengers along the route make more of their weekends.

Peterborough, Huntingdon, St Neots, Sandy, Biggleswade and Arlesey will have a direct Gatwick Airport service on Saturdays for the first time. Cross-London services to Gatwick from Hitchin, Stevenage and Finsbury Park will triple to three trains per hour.

Central London stations between St Pancras International and London Blackfriars will see an increase in the popular Saturday services from 11 to 13 trains per hour in each direction.

Thameslink is creating the new cross-London services by linking existing Peterborough to King’s Cross services with London Bridge to Horsham services, through central London via St Pancras and Blackfriars.

Other changes in the winter timetable, which begins on Sunday, 15 December, include the reinstatement of more weekday peak Great Northern trains calling at the busy stations of New Southgate and Oakleigh Park, as requested by passenger groups in the area. Both stations will see an extra two trains towards Moorgate per hour during the morning peak, creating a peak service of six London trains per hour.

Tom Moran, Managing Director for Thameslink and Great Northern, said: “We are delighted to be introducing these improvements for our passengers, because we know there has been strong demand for them. This will provide more travel opportunities for existing and potential new passengers.”

Also, from Saturday 14 December until summer 2020, most weekend and late evening (after 21.40) services that run in and out of Moorgate will start and finish at King’s Cross instead. This is to give Network Rail time to carry out intensive maintenance and cleaning of the Northern City Line tunnels.

Tom Moran said, “We thank passengers who use Moorgate in the late evening and at weekends for their patience while Network Rail undertakes this vital maintenance.”

On weeknights when Moorgate is closed, four departures after 21.40 will be temporarily removed, because King’s Cross can accommodate a maximum of only six extra trains per hour, fewer than the eight being diverted. Passengers can find out more information at www.greatnorthernrail.com/moorgate

These are among a number of changes being made in the winter timetable that begins on Sunday, 15 December. For more details, visit www.thameslinkrailway.com

GTR is currently the most punctual of the large and complex operators in UK rail according to 'On Time' statistics released by the Office of Rail and Road for May, June and July 2019, and fourth of all train operators in the UK 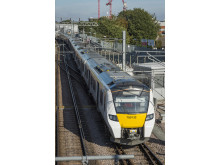