Young people across North Glasgow have come together to develop projects, present them to the community and help decide which should be allocated funding as part of an inspiring local initiative.

Supported by the Scottish Government’s Community Choices Fund, led by ng homes and facilitated by Space Unlimited, the “Your Voice Young Choice” project put the decision-making responsibility in the hands of thirty-seven 10-16 year olds, who dreamed up concepts and projects which could promote positive change and social inclusion in their communities.

This was overseen by a support process which identified specific themes which the youngsters could develop before allocating funding to them.

Projects included; creative spaces, athletic and sports clubs, gardening and food workshops, music, drama and arts clubs, even a young person’s gym! Each of the projects were unique, creative and positive, as the young people learned key motivational, budgeting and leadership skills. 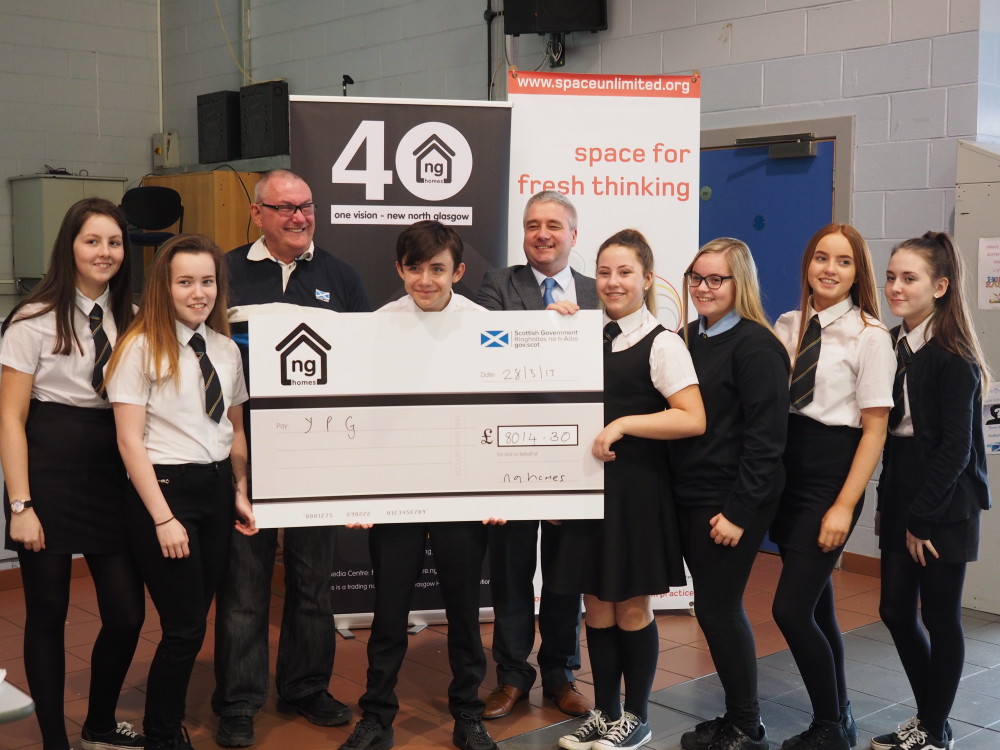 “This has been a fantastic opportunity for some of our young people to work alongside ng homes and Space Unlimited to develop something that will positively impact upon the community in which they live. This partnership working has provided a real-life situation for these pupils to actually develop their capacities as effective contributors, successful learners, responsible citizens and confident individuals.”

Following a Community Dialogue event held on the 1st of March at Saracen House, where local adults and organisations met with the young people to discuss their ideas and help progress them, the ideas were then showcased at a Community Choices budgeting event on 28th March in Springburn Academy.

At this event, young people from the area voted on the ideas to determine how much money each idea would receive. The three voting sessions created a real buzz and excitement in the room with over 600 votes being placed on eleven local projects, resulting in a total of £57,942 in grants being allocated. 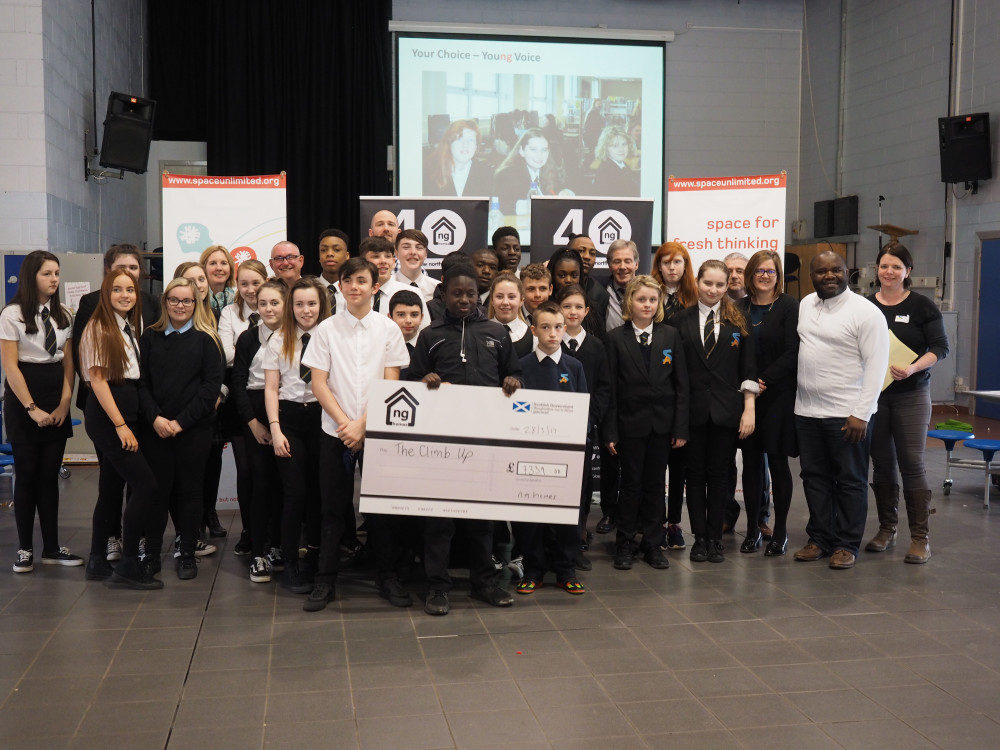 The most popular project and the one which received the largest amount of grant funding was The Climb Up, a hillwalking club providing equipment and qualified guides to get you out and active in our glorious Scottish hills.

Owen Cook, Joint Partnership Manager at Space Unlimited, said: “It’s been a pleasure working alongside ng homes and with young people from North Glasgow on this project so far.”

“As young people and adults work together to make the ideas happen, the young people’s confidence, skills and sense of connection to their community will continue to grow. They’ll know that they can really make a difference.”

Following the success of the project, a Young Persons’ Forum will be established to sustain the interest and involvement of the young people beyond this project and continue to give them a voice in their community.

ng homes also want to help young people realise their potential and to have input into shaping ng homes’ strategy and services for young people in North Glasgow. 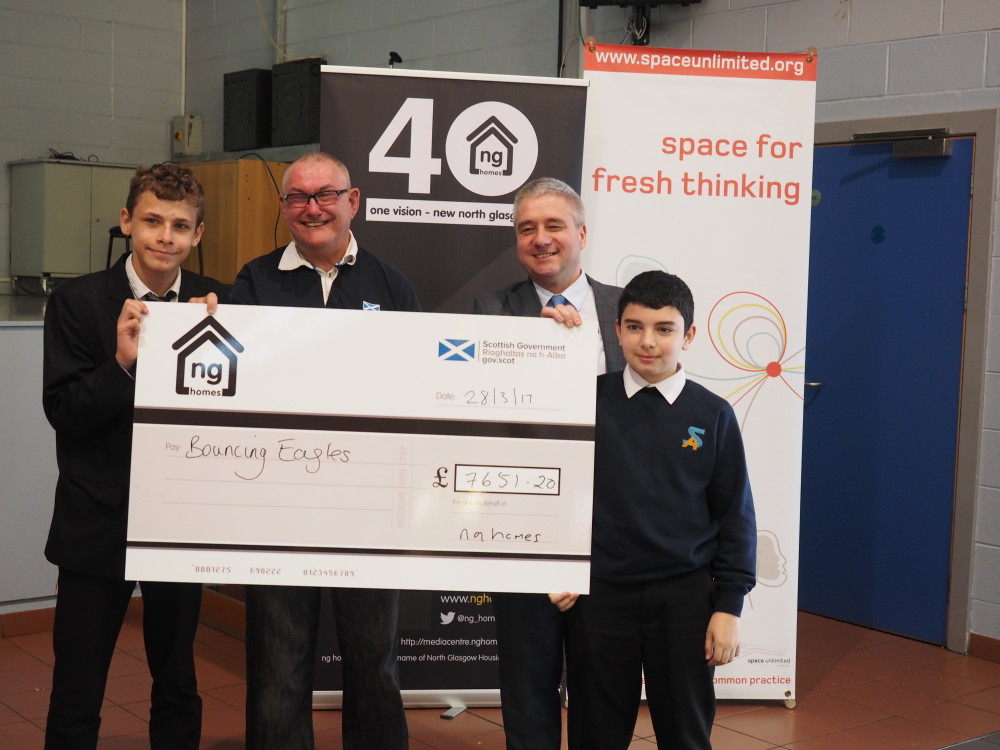 “Community Choices is a fabulous way of allowing local people to get involved in decision-making in their local area. ng homes’ Community Choices gives our young people from North Glasgow the opportunity to make significant change allowing them to bring their ideas to life and, with participatory budgeting an our support, allows them to learn how to calculate and run small projects.”

“The ideas have been fantastic and it was interesting that a number of the projects related to Health and Wellbeing, which really gives our young people a voice on what they think is missing from their local area. Hopefully the new skills and this experience will give young people the appetite to get involved in their local community in the future.”

“I was delighted to attend ng homes’ Community Choices event at Springburn Academy.

I was impressed and inspired by the young people who were pitching for votes, and also by the young voters who took the whole process very seriously.”

“I look forward to seeing the many ideas coming to fruition with support from the Community Choices funding secured on the day.”

“It’s great to see so many local young people coming together and starting to get really engaged in the idea of doing something to support their community. The Community Choices funding has really facilitated that and it will be exciting to see these projects go live in the coming months!”

Our vision is to create a new North Glasgow: a great place to live, learn, work, visit and invest.