Partnership to bring science to life

Two organisations committed to shaping the future of science in the North East have joined forces in a new alliance that will draw the public into the world of science.

Northumbria University and the International Centre for Life have launched a partnership focused on bringing science to life for the public.

The ambitious collaborative learning and research partnership was sealed by the signing of a Memorandum of Understanding by Professor Andrew Wathey, Vice-Chancellor and Chief Executive of Northumbria University, and Linda Conlon, Chief Executive of the International Centre for Life.

The collaboration will see both institutions work together on research projects, a postgraduate professional development programme and exhibitions.

The partnership has led to the creation of a unique degree programme, officially unveiled during the launch. The MSc Public Engagement with Science degree – the first of its kind in the UK – will be delivered by experts at both institutions. Its first cohort of students will begin in September this year. Students will benefit from placements as well as access to Life’s facilities, where they will stage exhibitions and deliver public engagement activities.

Upcoming partnership collaborations include the BODY WORLDS Vital exhibition, a world-famous display of real human bodies and organs that will make its UK debut at Life from May. A Northumbria expert will be Anatomist-in-Residence during the exhibition, which tells the fascinating story of how best to fight life-threatening diseases such as cancer, diabetes and heart ailments, through healthy choices and lifestyle changes. 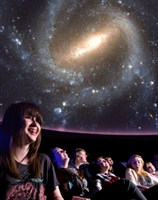 The University is also working alongside Life as it hosts Maker Faire UK next month. The two-day festival showcases the creations of talented hackers, coders, DIYers and inventors.

Professor Andrew Wathey, Vice-Chancellor and Chief Executive of Northumbria University, said: “This new partnership between Northumbria and Centre for Life reflects a joint ambition to encourage people to think about science in new ways. A new collaborative degree programme in Public Engagement with Science marks the first step toward realising this ambition, and is the first of a number of projects that will build on the strengths of our two organisations.”

Linda Conlon, Chief Executive of the International Centre for Life, added: “We’re thrilled to have formed this new collaborative learning and research partnership with Northumbria University. It not only recognises the unique contribution that both organisations make to Newcastle and the North East’s engagement with science, technology, engineering and maths (STEM) but also serves as the basis for a continuing programme of activity that reinforces Life’s mission to be the best place in the UK for enthusing and engaging everyone in science.”

During the partnership launch event, Science Explainers from Life demonstrated lively experiments and education workshops with school children, providing guests with an insight into the kind of career opportunities that the MSc Public Engagement with Science degree could lead to. A showcase of how the North East’s largest planetarium can be used to enthuse and engage students in physics and astronomy was led by Head of Public Engagement, Elin Roberts.

It follows news of Northumbria University working with Life and other partners on a £1.2 million project to get young people interested in physics. Led by the University, Think Physics is an innovative, cradle-to-career venture aimed at using physics to inspire young people, particularly women, into Science, Technology, Engineering and Mathematics (STEM) disciplines.

Northumbria is a research-rich, business-focussed, professional university with a global reputation for academic excellence. To find out more about our courses go towww.northumbria.ac.uk

An anatomy demonstrator from Northumbria University is switching from teacher to scholar after signing up to the University’s unique new degree programme.

You will have seen them on the big screen countless times, usually in tense spy movies or US police dramas, but what are the realities of polygraph tests and why do our courts consider their evidence as inadmissible?

Around 2,000 students from schools across the North East paid a visit to Northumbria University, Newcastle, to take part in one of the largest science events of its kind.

Northumbria’s students and staff have been awarded for their innovation at this year’s spectacular Maker Faire UK exhibition at the Centre for Life.

THE next generation of scientists and engineers will benefit from ambitious new investment in world-class STEM education by Northumbria University, Newcastle.

More than 190 attendees from local and national businesses attended the Business Partnership Dinner at Northumbria. They heard about the University’s recent business collaborations, and how to access a range of support from Northumbria and its facilities.

Science week comes to a close with eclipse excitement

Think Physics at Northumbria has run a busy programme of events this to celebrate British Science Week.

COMMENT: What can science tell us about the Star of Bethlehem?

​Carol Davenport, Director, Think Physics, Faculty of Engineering and Environment, Teaching Fellow in Ecology at Northumbria University, discusses the science behind the star of Bethlehem for The Conversation.

A new exhibition at the Life Science Centre will help us understand what’s going on inside our heads.

​Science, Technology, Engineering and Mathematics (STEM) facilities at Northumbria are undergoing a stunning transformation this summer thanks to £6.7m investment.

Physics graduates set their sights on the stars

​Northumbria celebrated a ‘quantum leap’ this summer when its first cohort of Physicists graduated from the University.