No Yes
Overjoyed. Andrew and Wendy Wilkinson holding letter from Seasons confirming their rights are reinstated

Andrew and Wendy Wilkinson joined local timeshare resort Clowance Estate & Country Club 30 years ago, paying the eyewatering sum of £25,000 for for a one week membership in a studio. "This was many times the value of an equivalent membership anywhere else," Andrew explains.  "The only reason we paid this huge amount, financed over 10 years, was because it gave our whole family year round access to the club's facilities"

The couple say they had their access revoked by Seasons Holidays after the Bristol timeshare company took over the resort.  "It seemed to be a bid to extort more money from us and change the conditions of our membership.

"We had no choice but to ask the TCA (Timeshare Consumer Association) for help," says Andrew."  They organised a media campaign to highlight what was happening to us.  The story was reported on other sites and we were able to get in touch with another group of Seasons Holidays members who were also having a difficult time with the company at a Northumbrian club called Slaley Hall .

"We saw that their case had been featured on Radio 4 's award winning consumer program You & Yours and Daniel Keating from the TCA was in the process of getting us featured on the program as well.

"I was very nervous about speaking to so many people on national radio, but I would have done it if it was needed.  That was the level of injustice Wendy and I felt.  Other media was lined up too, including Bristol Live."

Luckily for the Wilkinsons, this drastic action proved unnecessary after Seasons Holidays client liaison manager, Sharon reached out and corrected the problem.

"We were overjoyed," says Wendy.  "We had an email from Sharon confirming that our membership 'allows you and your family to use the facilities on a daily basis'.  This is what had been denied to us and to have it reinstated is all we wanted.

"Our family have access again and we can use the facilities we paid for.  This has been a stressful couple of years and at times we felt like we were banging our heads against the wall.  Hopefully this is all behind us." 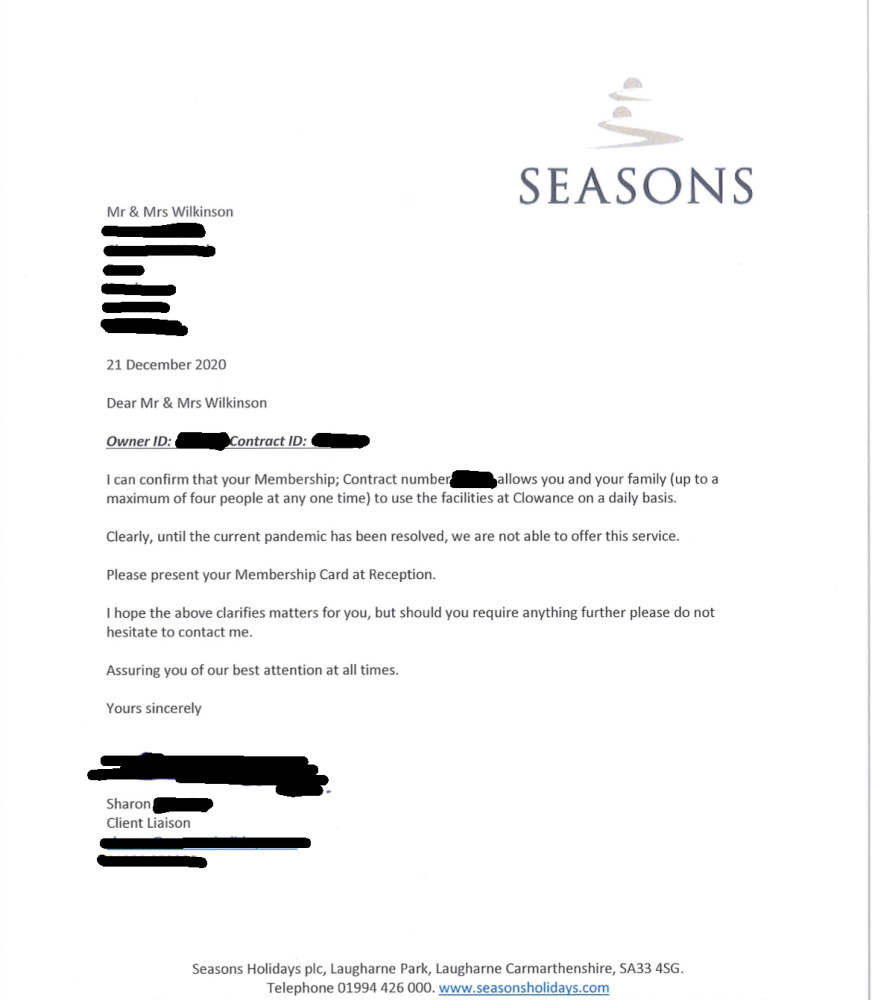 Above:  Confirmation letter that the Wilkinson family can access the Clowance Estate facilities again

"We want to say thank you to Sharon and Seasons Holidays for their change of heart," adds Andrew.  "It takes courage to put things right and we are grateful they were big enough to do this.  Our level of respect for them has gone right back up and, provided they keep to their word, we are proud to call ourselves Seasons members again.

"We also want to thank Daniel Keating and the Timeshare Consumer Association for focussing media attention on our situation.  They worked tirelessly and for no charge to bring our situation into the public domain.  Without their help its possible we could have fallen through the cracks and lost our access forever.  We feel that we owe this success to The TCA's involvement."

Daniel Keating from the TCA, who represents the Wilkinsons in this matter gave the following statement:  "We are pleased that Seasons Holidays were willing and able to address this issue.  We are further impressed at the empathy and understanding  Seasons have demonstrated in re-instating the Wilkinson family's rightful access to the club facilities  Andrew and Wendy were extremely frustrated but thankfully their membership problems have now been resolved.

"Anyone with timeshare related issues, concerns or questions please get in touch with us on the contact details below, for free, impartial advice and help."

We are a proud member of the UK Small Charities Coalition

Another timeshare juggernaut throws in the towel

Revealed: The powerful, psychological techniques used to coerce prospects into joining their clubs.

Avoid the timeshare resale scams. If it sounds too good to be true, it is.

(VIDEO) The expensive journey of a timeshare owner

Timeshare owners will statistically end up spending 5 times as much as their initial purchase price, in upgrade costs. That is additional to the maintenance and other fees

Who are the Timeshare Consumer Association?

Timeshare Consumer Association. Who are they?

Timeshare companies under fire for "profiteering" during the pandemic

(VIDEO) Does timeshare have a future?

Could it be that like Cretaceous leviathans blinking unwittingly at an ever brightening second sun, the timeshare giants are finally facing extinction? Or will they evolve into something new?

Timeshare companies and the RDO do not want their customers seeking independent advice...

Europeans considering buying a timeshare in America, read this before you commit.

Anfi Group desperate to upgrade members to new contracts. Is this an attempts to avoid tens of millions of pounds worth of compensation claims against the timeshare giant?

The Timeshare Consumer Association (TCA) was started in 1997 by Sandy Grey, a timeshare owner himself, who became sick of what he saw as repugnant sales practises in the timeshare industry.
Sandy ran the website diligently from his home in Blythe, gaining a reputation for integrity and fearlessness at a time when some timeshare companies skirted with criminal behaviour and employed unsavoury characters.
Sandy was gradually joined by other volunteers, disaffected owners and even former timeshare sales staff, sick of the “dishonesty” in the industry as a whole.
Over the years, Sandy and his band of volunteers built up a huge volume of consumer testimony and knowledge. TCA became the number one source of impartial, expert advice regarding the latest scams as well as organisations that actually can be trusted.
Sandy sadly passed away in 2013, but he had started a movement that could not be stopped. Consumers continuously contact us to both ask for and give advice, sharing their experiences to help others stay ahead of the industry scams and pitfalls.
The information is moderated, assessed and categorised under the watchful eye of director Keith Dewhurst. With Keith at the helm, TCA has become the number one timeshare consumer organisation in the world.
Whilst there are paid employees, the TCA operates on a shoestring budget, relying on volunteers and donations, though these are never accepted from sources that could compromise the organisation´s integrity.
With your help, we will continue to hold the timeshare industry to account.
While there is timeshare we need the Timeshare Consumer Association watching.

Timeshare Consumer Association provides a central resource of consumer information on timeshare matters for both the media and the public. – We work towards encouraging responsible, honest, timeshare operators. We also publicly expose negative consumer practices and organisations which operate in a manner detrimental to timeshare buyers and owners.

We are staffed by former and current timeshare owners, as well as former timeshare industry staff. We know our way around the timeshare business.

A proud member of the UK Small Charities Coalition