No Yes
End of the timeshare business? Another big company closes down sales operations

Club La Costa (CLC) announced in October this year that they were 'pausing all sales operations until further notice.'  Observers at the time believed this to be a sign that the timeshare powerhouse may be getting out of the business for good.

CLC confirmed this expectation with an announcement by email on Friday 20th November 2020 that after over three decades at the top of the timeshare industry, they are finally admitting defeat.  Club La Costa are discontinuing new timeshare sales.

The email which was sent to all CLC members informed them that the decision was made to place the timeshare sales companies into a "controlled administration process" and that the closure of the companies will have "no impact whatsoever on CLC World's (existing) members". 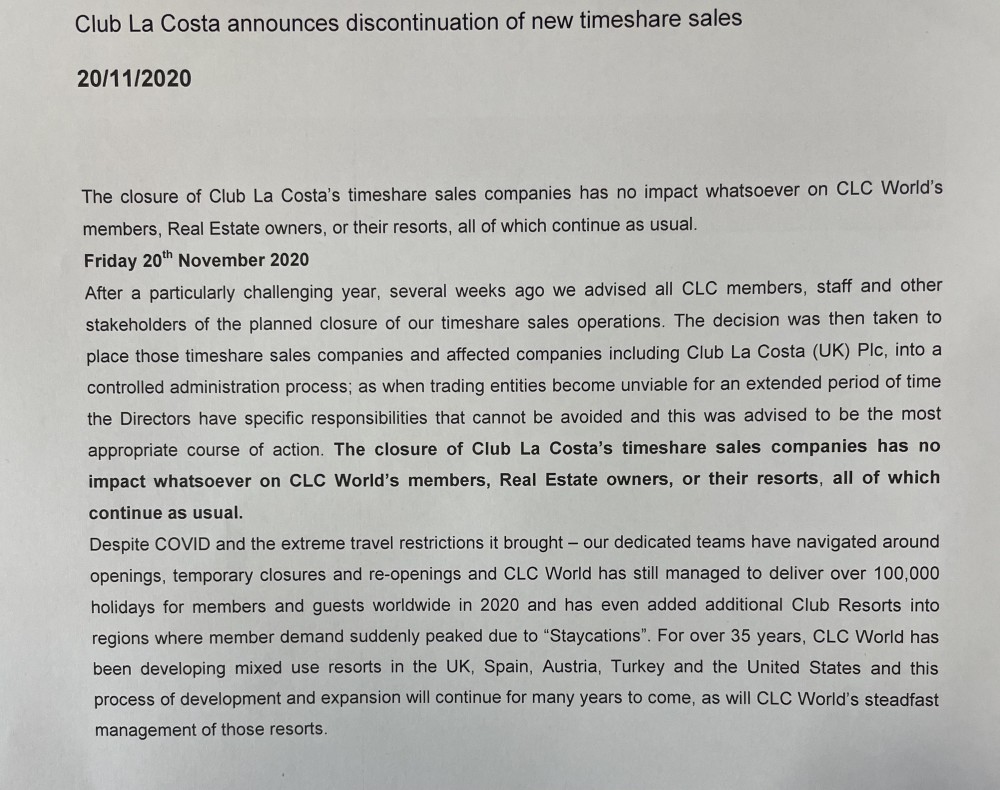 CLC email to all members

Greg Wilson, a claims expert from the Timeshare Advice Centre comments that, "CLC ceasing sales operations is one more indication that the industry´s days are numbered.  The timeshare system of holidaying was a great innovation a couple of decades ago, but they haven´t adapted and innovated to keep pace with the rest of the travel industry.

"The smaller, or weaker companies folded a long time ago.  The last ones left are the biggest and best, but it's clear that the end is inevitable.  Modern consumers no longer want the commitment of paying for a holiday every year for decades, or even indefinitely in some cases.   The pandemic has sped things up as owners are rebelling against having to pay for holidays that they can´t take, while their travel-agent-using neighbours only pay for the vacations they book.

Wilson points out that people pursuing compensation claims against the timeshare giant should not be affected.  "This controlled administration is to make sure that the  CLC liabilities do get settled.  And that includes what they may owe to clients who were issued illegal contracts.  Club La Costa still has enormous revenues coming in through their real estate business, external bookings and annual fees, so at this time we believe there to be no immediate concern about them running out of money."

End of an era

Daniel Keating of the Timeshare Consumer Association adds that "Club La Costa shutting down may well be a 'bellweather' indication that other operations are facing similar difficulties.  CLC were enormously successful in the past, and the reason they have stayed profitable so long is that they were very well run.  If they can close, then so can anyone.

"We agree that there is no need for concern and believe the assurance that members will not be affected.  Anyone wanting further advice on their situation with any timeshare membership is welcome to get in touch with us the TCA on the contact details below."

We are a proud member of the UK Small Charities Coalition

Seasons Holidays pushing out elderly timeshare members to cash in on demand for UK holidays?

Timeshare members furious at being charged full fees despite the resorts being closed to holidaymakers.

RDO and KwikChex acting on behalf of the timeshare industry

Revealed: The powerful, psychological techniques used to coerce prospects into joining their clubs.

Avoid the timeshare resale scams. If it sounds too good to be true, it is.

(VIDEO) The expensive journey of a timeshare owner

Timeshare owners will statistically end up spending 5 times as much as their initial purchase price, in upgrade costs. That is additional to the maintenance and other fees

Is there a future for the timeshare industry?

Could it be that like Cretaceous leviathans blinking unwittingly at a brightening second sun, the timeshare giants are finally facing extinction? Or will they evolve into something new? We asked three experts what they believe the future holds for the tourist industry´s wild cards.

Timeshare Consumer Association website getting a makeover. Fresh new look, but nothing else changes.

Timeshare resales scams rearing their ugly heads yet again, both in Europe and the USA.

The Timeshare Consumer Association (TCA) was started in 1997 by Sandy Grey, a timeshare owner himself, who became sick of what he saw as repugnant sales practises in the timeshare industry.
Sandy ran the website diligently from his home in Blythe, gaining a reputation for integrity and fearlessness at a time when some timeshare companies skirted with criminal behaviour and employed unsavoury characters.
Sandy was gradually joined by other volunteers, disaffected owners and even former timeshare sales staff, sick of the “dishonesty” in the industry as a whole.
Over the years, Sandy and his band of volunteers built up a huge volume of consumer testimony and knowledge. TCA became the number one source of impartial, expert advice regarding the latest scams as well as organisations that actually can be trusted.
Sandy sadly passed away in 2013, but he had started a movement that could not be stopped. Consumers continuously contact us to both ask for and give advice, sharing their experiences to help others stay ahead of the industry scams and pitfalls.
The information is moderated, assessed and categorised under the watchful eye of director Keith Dewhurst. With Keith at the helm, TCA has become the number one timeshare consumer organisation in the world.
Whilst there are paid employees, the TCA operates on a shoestring budget, relying on volunteers and donations, though these are never accepted from sources that could compromise the organisation´s integrity.
With your help, we will continue to hold the timeshare industry to account.
While there is timeshare we need the Timeshare Consumer Association watching.

Timeshare Consumer Association provides a central resource of consumer information on timeshare matters for both the media and the public. – We work towards encouraging responsible, honest, timeshare operators. We also publicly expose negative consumer practices and organisations which operate in a manner detrimental to timeshare buyers and owners.

We are staffed by former and current timeshare owners, as well as former timeshare industry staff. We know our way around the timeshare business.

A proud member of the UK Small Charities Coalition