Toyo Tire & Rubber Co., Ltd. (President: Takashi Shimizu) participated in the annual TOKYO AUTO SALON, which was being held from January 12 (Fri) to January 14 (Sun) at Makuhari Messe in Chiba City. The Tire manufacturer exhibited together with the tire brand NITTO.

■ From talks of the future to much-anticipated guest appearances

Things kicked off on January 12, which was dedicated as the press and trade day. First, the president of Toyo Tires, Takashi Shimizu, as well as the Managing Director, Tomoshige Mizutani, gave presentations on the history of the brands as well as the North American automobile culture, in which TOYO TIRES and NITTO have found a home among enthusiasts. In addition, many participants showed interest in the presentations of the various races Toyo has participated in recently. President Shimizu talked about the future vision of both tire brands, noting specifically the desire to "demonstrate our unique presence in the market with a premium lineup that pleasantly surprises consumers in line with the trend of pickup trucks and SUVs" based on the current trends in Japan and the global markets.

Ken Block and BJ Baldwin then appeared as special guests after the presentation. These two race-stars have built up a global pedigree, and were accordingly greeted by rousing cheers as they appeared on stage. Naturally, they were prompted on the company’s tires. Ken Block gave a glowing review, stating that ”the company has supplied me with Pikes Peak tires, which are extremely reliable even under the harshest conditions. I am very happy to have this opportunity to work together." BJ Baldwin, who was supplied with OPEN COUNTRY tires for Baja 1000, chimed in ”the tires do not break or puncture even when I speed at over 150 miles/hour or when I crash into a rock the size of a microwave oven at over 60 miles/hour. I have been able to win at many competitions thanks to these tires." Both sides expressed their trust and gratitude towards TOYO TIRES, to which President Shimizu responded, "We are proud to have the two of them who race in extreme conditions trust and use our tires." 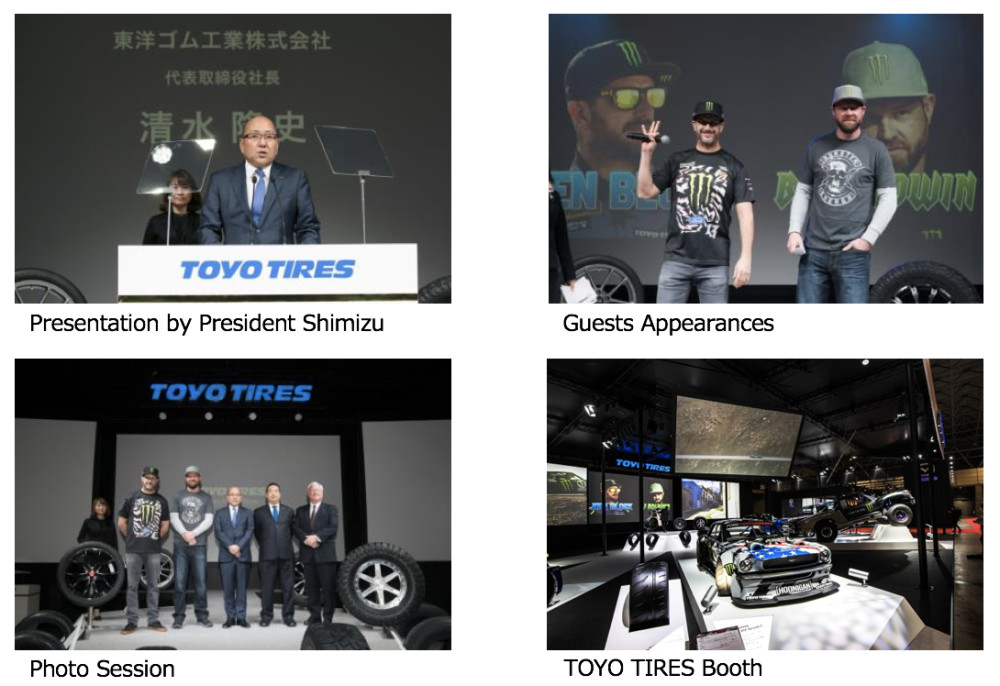 ■ One highlight among many: hearing Ken Block and BJ Baldwin discuss everything from driving techniques to their private lives at exclusive talk sessions

After the new products "PROXES" and "OPEN COUNTRY" were embodied beautifully by models as part of a presentation of the TOYO TIRES COLLECTION, Ken Block and BJ Baldwin re-entered to loud cheers – flanked themselves by models, who were wearing costumes based on the design of their personal cars.

Both guests were asked a variety of questions, including about their private cars, future plans, thoughts on coming to Japan, driving techniques, and of course the video production which made them famous on the video platform ”YouTube”.

When asked about Japan, the first thing they praised was the food, followed by expressing their gratitude for the opportunity to come to Japan. When asked about the next installation of his video series "Climbkhana" and if he would like to take the series to Japan, Ken Block smiled and said, "I would like to give it a shot if given the chance." This remark immediately set off rumors about the possibility for the hugely popular video series (over 500 million views) to have an installment set in Japan.

A fan in the venue then asked both players how they believe they can continue to grow in the future, to which BJ Baldwin replied, "I'm always thinking about how I can drive better every day." Ken Block also replied with confidence that, "I drive with ambition everyday while thinking about the mistakes I've made. I will continue to work harder to make sure that I am better tomorrow than I am today."

■ An unforgettable demonstration: live drifting from Ken Block himself

One of the most anticipated events of the show was the live drifting demonstration by Ken Block, which was held on the same day. He showed off some spectacular drifts with a Ford Fiesta RX43 on a special course set up in the venue. Awing the audience while drawing cheers throughout, Ken Block's skillful handling was evident amidst the loud cracking sound and smoke that filled the venue during his drifting. There was a huge round of applause from the audience once the stunt was over, and the demonstration run wrapped as a rousing success.

The TOYO TIRES booth this year sported a revamped image and showed off a more global side of the TOYO TIRES brand, which supports “real driving” using the presence and dynamism of space. From authentic American pickup trucks to EuroSports and SUVs built for racers, this event showcased vehicles that are noteworthy for being rarely seen in Japan. 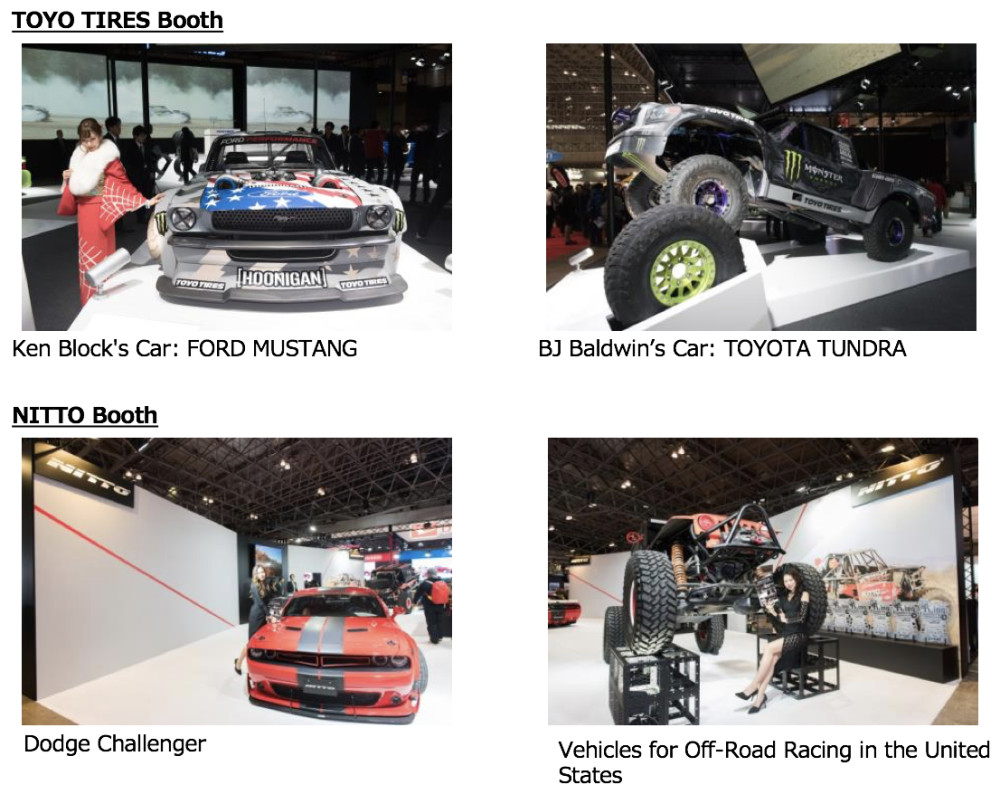 Tuning, motorsports, custom cars - if any of these words tingle your senses you are most likely already aware that the Tokyo Auto Salon is the mecca for the Japanese aftermarket scene. Numerous events are on tap, including demo runs as well as special talk sessions by the stars in addition to all the madness Toyo Tires is known for the Salon.