May 7, 2019—On May 4, 2019 at the final round of the AMA 250SX West Championship held in Las Vegas, Monster Energy/Star/Yamaha Racing’s Dylan Ferrandis won his first-ever championship aboard his YZ250F. This is the second year in a row for the team to claim the title, with Aaron Plessinger accomplishing the feat last year.

Ferrandis was born in 1994 in France and competed in the MX2 World Championship from 2011 to 2016, finishing 4th overall in 2014 and showing himself to be a top-level rider. He made his AMA Supercross debut in 2017 in the 250SX West Championship, taking an impressive 6th for the season. Last year, he raced in the 250SX East Championship, but due to a mid-season injury finished 21st overall.

In the first five rounds of this season, he scored three 2nd-place finishes, putting himself in 4th with a 12-point gap to the leader. In the second half, he took his first win at Round 7 in Seattle before winning again at Round 8 in Houston to close the gap to 5 points. But the following round in Denver saw him finish 2nd behind his rival, which opened the difference to 8 points heading into the final round.

The season finale in Las Vegas was a Showdown round and included all the riders from both the 250SX East and West championships—bringing the best riders from both to the track—but Ferrandis made an excellent start out of the gate to take the lead on the first lap. He went on to hold that lead through the entire race and take the win while his chief title rival finished 20th due to a fall, allowing Ferrandis to overcome the point gap and claim the title. 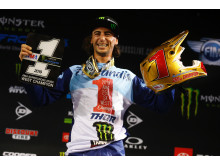 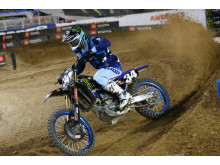 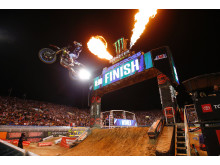 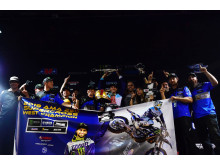