In late August, the 7th Tokyo International Conference on African Development (TICAD) was held in Japan. Nearly 50 years ago, Yamaha Motor saw the potential of African markets and has been working diligently at the grassroots level to develop businesses there ever since. Going forward, Yamaha will formulate new business strategies for a wide range of product categories in accordance with our mid- and long-term management plans to achieve net sales on the level of 20 billion yen by 2030, as stated by Yamaha Motor President Yoshihiro Hidaka. In this issue, we look back on Yamaha’s efforts in Africa and some of our new projects on the horizon.

The African continent occupies roughly 23% of the world’s landmass, covering an area of approx. 30 million km2 divided into 54 countries and populated by about 1.23 billion people. It is still currently recognized as a developing region of the world, but funding via official development assistance (ODA) and investment by companies interested in developing the continent’s wealth of minerals and other natural resources has meant steady upward progress is being made.
For example, in Sub-Saharan Africa, the average economic growth rate between 2008 and 2017 of 3.74% was more than three times that of high-income countries of the world, and in the roughly 20 years between 2000 and 2018, the GDP per capita grew 2.6 times over. It is estimated that by 2050, the population of the entire African continent will exceed 2 billion, and if the current economic growth continues, there are great hopes that Africa will become a mammoth market with a great variety of consumer goods.
Yamaha Motor is one of the early pioneers of helping to develop African markets long before today’s economic trends were apparent. Founded as a motorcycle manufacturer in Japan in 1955, Yamaha began its ventures into world markets as early as 1958, establishing its first overseas base of operations in Mexico. After that, Yamaha developed a diverse range of products, from outboard motors, FRP boats and snowmobiles to ATVs and multipurpose engines, while diversifying its business portfolio and expanding into new markets, with far-reaching sales networks in North America, Europe, Central and South America, Southeast Asia and other parts of the world.
Yamaha’s first entry into Africa began in around 1970, with the target narrowed down to commercial-use outboard demand that the European and U.S. manufacturers had yet to tap into. Yamaha sales representatives traveled on their own from village to village, coming up with inventive ways to mount outboards on existing wooden boats and introducing local fishermen to more efficient Japanese fishing methods. Through their efforts, fishermen and transport boat operators on the lakes and rivers were able to motorize their previously hand-rowed wooden boats.
“We asked ourselves what we could do to sell outboards, but also what we could do to please the customers more,” says a seasoned Yamaha sales representative who was assigned to African markets in the late-1970s. “We thought about the various things that were needed and improvised ways to get them done, and as a result, we would see beaches filling up with boats mounting Yamaha outboards. So many people would tell us how great Yamaha was with a big smile. It was this sense of achievement or should I say fulfillment that became our biggest motivator.”
The sales reps did surveys to gather vital information such as how outboards were used in each market or region and fuel quality differences and relayed the info back to product development. In some cases, they built close working relationships with local service technicians in order to support customers not only with the right “hardware” but also “software” aspects like user services. Sticking to that uniquely Yamaha business style in the many years that followed eventually won Yamaha the highest outboard market share in Africa it enjoys today. 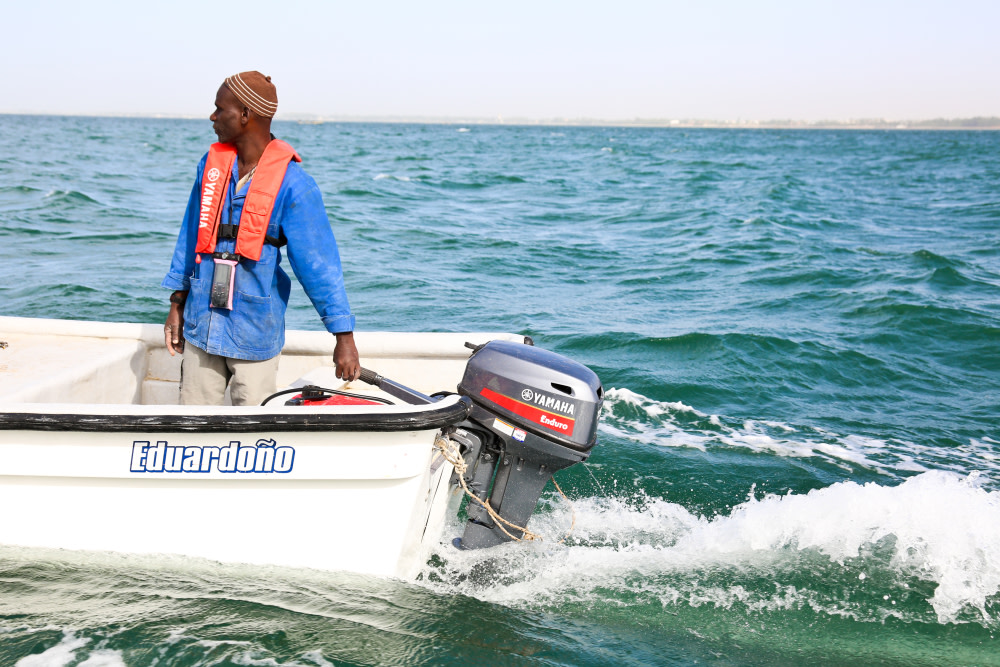 It was the introduction of our Enduro Series outboard motors from 1975 that spread the Yamaha brand name throughout Africa. Their outstanding durability won a high level of trust from customers that lasts to this day.

Addressing Society’s Issues with Our Products and Services

Today, Yamaha’s businesses in Africa are managed by the Overseas Market Development Operations (OMDO) Business Unit, which provides ongoing support of and cooperation for the development of emerging economies and the improvement of social welfare services. OMDO handles all aspects of sales, maintenance, etc., of Yamaha outboard motors, motorcycles and all other products via 59 distributors in 52 African countries.
The foundation of this sales network is the across-the-board implementation of our “3S” policy ( Sales, Service, Spare parts). With the Service aspect, maintenance and service skills are essential to customer peace of mind and trust in the Yamaha brand, and training is given to each distributor’s mechanics through the Yamaha Technical Academy (YTA) using a globally unified training and education curriculum. These mechanics in turn train the private mechanics operating in the surrounding towns or villages in a system that passes skills from Yamaha down to the local level.
Yamaha is also involved in a growing number of initiatives to address various societal issues in coordination with the Japanese government, the governments of African countries, international organizations like the UN, NGOs and more. One example is the modernization of fishery. Besides motorizing fishing boats through outboards, shifting from traditional wooden boats to FRP boats—which offer outstanding durability, strength and stability—can reduce the number of accidents while at sea as well as speed up the landing of catches, thereby increasing the freshness and quality of the fish and boosting the fishermen’s income.
Toward that aim, Yamaha has supplied FRP boat molds to Kenya, Mauritania and Mozambique, helped train local boatbuilders and set up factories providing technical assistance. And in 2019, production began at a new pilot factory run in collaboration with a Yamaha distributor in Senegal. 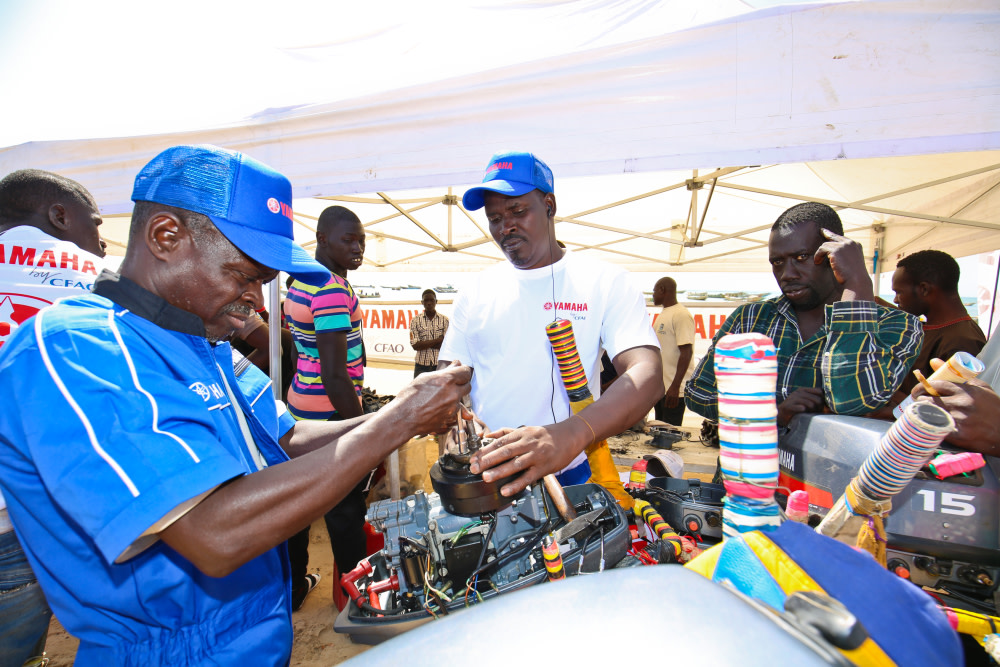 In addition to supplying products, Yamaha conducts support programs on a regular basis, from maintenance of outboard motors and FRP boats to technical training seminars. We also train service mechanics to heighten their skills.

Also, it is said that some 270 million people in Sub-Saharan Africa are unable to get clean water, and Yamaha is contributing toward solving this problem through our Clean Water project. The Yamaha Clean Water Supply System employs slow-sand filtration—a natural water purification method—and a single facility can supply 8,000 liters (enough for roughly 400 households) of potable water per day. What’s more, the system doesn’t require a large electricity supply or any regular addition of chemicals or replacement parts. This makes maintenance very simple and enables the system to be managed and operated indefinitely by the local community itself. Due to these benefits, 21 of these Yamaha systems have been installed in Africa as of June 2019, and we have received reports from the communities that health and hygiene has improved thanks to the safe water they provide, that new businesses selling excess clean water to neighboring areas have emerged, and that the facility has freed children from the daily toil of drawing water and they now have time go to school. Current plans also call for a total of six additional systems to be installed in Madagascar and Ethiopia. 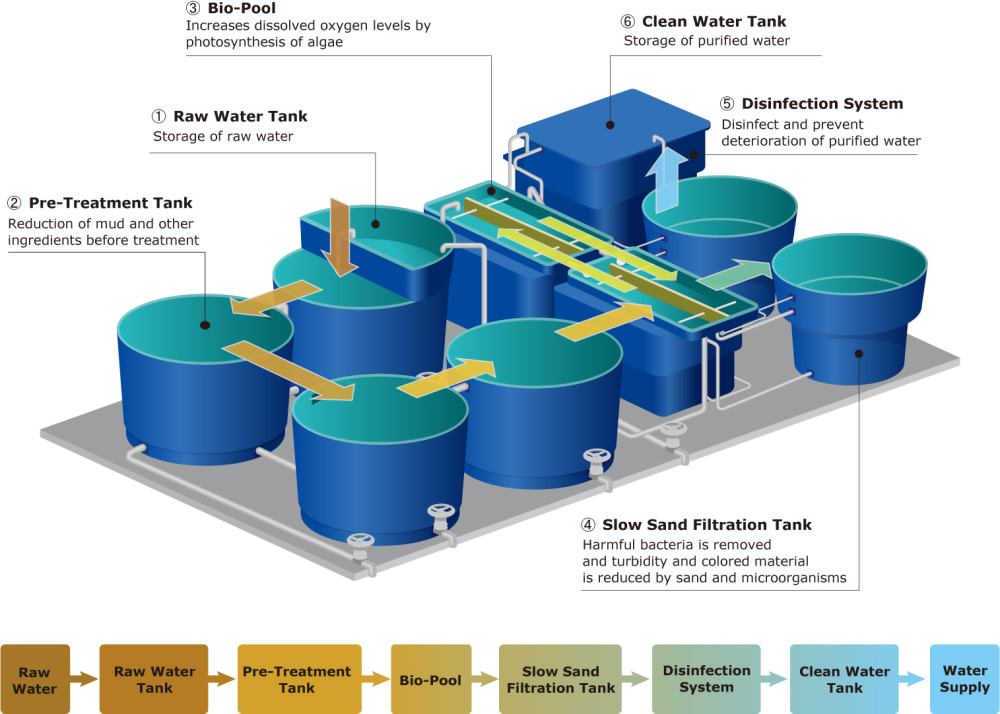 The Yamaha Clean Water Supply System uses a simple construction based on slow-sand filtration, a natural water purification method using sand, gravel, water-borne bacteria, etc. In 2019, 10 facilities were completed in Senegal while five more are planned for Madagascar and one bound for Ethiopia.

Embarking on New Business Ventures in Transit and Transport

As noted earlier, Africa is undergoing rapid modernization. This can be seen with the spread of cellphone use in Sub-Saharan Africa surpassing 70% (as of 2017), the volume of mobile banking transactions more than quadrupling in the six years since 2013 and e-commerce quickly becoming commonplace.
However, one area that has been quite slow to see progress is development of transportation infrastructure. Though the people desire it, smooth and reliable transport of goods has yet to be achieved and this has attracted a growing number of entrepreneurs to try to address the issue with IT solutions and startups.
This movement led Yamaha to team up with startup companies incorporating IT into motorcycle delivery and taxi services to provide routes and directions as well as rider management. Driving the expansion of these businesses will not only help answer society’s need for transit and transport infrastructure but also provide stable employment for many people. And Yamaha hopes to provide the foundation for a new motorcycle purchase financing system based on the rider data gathered.
As a first step towards this goal, Yamaha is working with Uganda’s CourieMate (WBPF Consultants Limited) to expand their delivery services, after which the plan is to establish similar business tie-ups with several companies in Kenya and Tanzania. Furthermore, Yamaha has invested in Metro Africa Xpress (MAX) in Nigeria—a company that operates motorcycle taxi and delivery services primarily in the country’s regional cities—in order to market Yamaha products in MAX’s main areas of business. 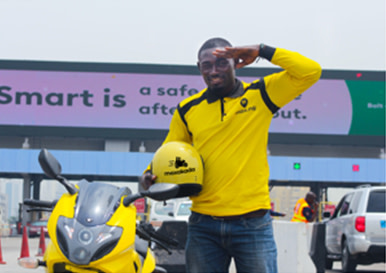 With private ownership of motorcycles still rare in much of Africa, Yamaha is instead working to have its bikes used in motorcycle taxi and delivery services and then utilizing the feedback to build the foundation for financing motorcycle purchases and developing models that better fit user needs, thereby leading to private purchases in the future.

For product lines other than motorcycles, plans are in motion to establish an aerial services business in a tie-up with a cargo airline company in Kenya using Yamaha’s industrial-use unmanned helicopters and YMR-08 multi-rotor drones.
In these ways, Yamaha Motor has spent some 50 years working to fulfill its corporate mission of bringing new Kando* and more fulfilling lives to the people of Africa with proven products and sound technologies, and we are embarking on new and exciting ventures to help usher in the next wave of progress for the African continent. 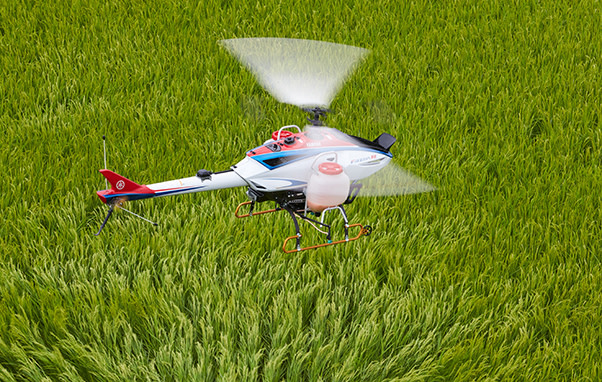 A tie-up is planned with a Kenyan cargo company to establish aerial services using Yamaha’s unmanned aircraft for agriculture, disaster response and the like.

*Kando is a Japanese word for the simultaneous feelings of deep satisfaction and intense excitement that we experience when we encounter something of exceptional value.

Some of Yamaha’s Key Projects in Africa 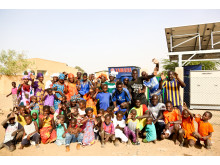