At the Tokyo Motor Show in the autumn of 2017, there were three Yamaha concept models in particular that drew significant attention.

One was the MOTOROiD, a self-balancing motorcycle with the ability to stand up on its own and slowly come to its owner autonomously when beckoned, and another was MOTOBOT Ver. 2, an advancement of Yamaha’s robot capable of autonomously riding an unmodified YZF-R1M on a racetrack. The third was the TRITOWN, one of the several concept models at the show utilizing Yamaha’s Leaning Multi-Wheel (LMW) technology. It is a compact personal mobility vehicle ridden standing up, and when it appeared on stage and was put through its paces, visitors were amazed to see it move across the stage with such swiftness and agility.

Roughly a year and a half later, field tests towards creating a production-ready TRITOWN began in Japan. In this issue, we introduce this project embodying the Transforming Mobility focus area put forward in Yamaha Motor’s Long-Term Vision towards 2030.

The TRITOWN has two wheels in the front using Yamaha’s proprietary Leaning Multi-Wheel (LMW) system and one wheel in the rear with a built-in electric motor that draws power from a lithium-ion battery mounted on the frame. It is both lightweight and compact, weighing about 40 kg and just over a meter in total length. The handlebars—complete with front and rear brake levers and a thumb-operated throttle lever—and the left and right footboards are connected to the LMW linkage. The vehicle is controlled by the user standing on the footboards and using both legs for balance while using the brakes and throttle lever with the hands to control speed. 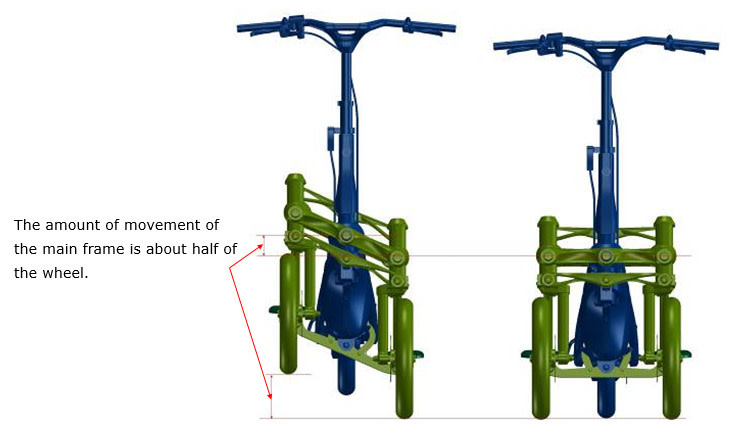 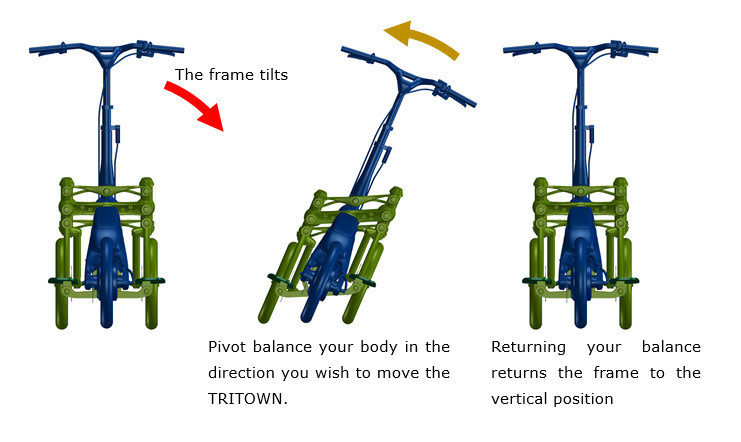 Using words like this to describe the vehicle may make it sound difficult to ride, but controlling the TRITOWN is in fact very intuitive; it takes very little time to become accustomed to it. You first make sure the tilt-lock is engaged by the lever on the steering post being down, then grasp the handlebar grips and brake levers with both hands and step up on the footboards one foot at a time, so you are standing up naturally and straddling the machine. Then, once you disengage the tilt-lock, you will find yourself standing up straight and still with next to no wobbling of the machine. There is no need to force the handlebars to stay upright and in place nor overly focus on keeping balance—it is that intuitive.
Once you are standing up like this, you simply release the two handbrakes and push the throttle lever on the right with your thumb to move forward. To turn, you just turn the handlebars and lean the TRITOWN over into the turn just like a bicycle, and the two front wheels, handlebars and footboards all lean in unison, making turns smoothly and steadily. Also, because the LMW linkage allows the left and right front wheels to move independently, the TRITOWN can go over bumps or curbs and ride across slopes as well.
The TRITOWN can be run at up to 25 km/h, but since the rider can remain on it even at a full stop, it moves with superb stability at very low speeds that, if on a bicycle, would warrant getting off and walking it instead. What’s more, since it is an electric vehicle, there is no smell or engine noise, thus it can be enjoyed alongside pedestrians. Also, its highly maneuverable and compact chassis, the great handling stability from its LMW design, and its capability for traversing different road surface elements gives the TRITOWN the performance to produce the same agile and engaging ride that was demonstrated at the Tokyo Motor Show.
This delightful mix of commuter usability and an engaging user experience packaged into a small chassis with an eco-friendly electric powertrain represents the TRITOWN’s biggest appeal as a new form of mobility. 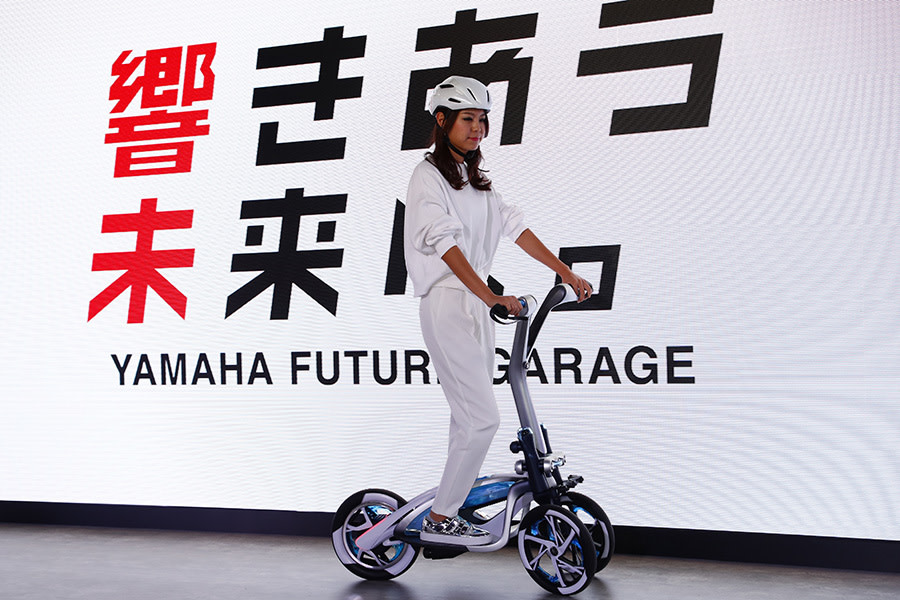 The TRITOWN during its on-stage demonstration at the 45th Tokyo Motor Show in 2017.

Keep It Simple: Stopped and Standing Without Electronics

Usually, vehicles with two front wheels like cars or certain trikes can’t be leaned into turns like a conventional bicycle or motorcycle, but they also do not fall over when stopped. In contrast, Yamaha’s LMW models like the Tricity and NIKEN are designed to allow the right and left front wheels to move independently and lean together with the chassis, but they will still fall over if the rider does not put a foot down when stopped.
That led several engineers involved with developing the Tricity 125 to begin researching an LMW system that would enable a vehicle to remain stopped and upright by using the human ability to stand and maintain balance instead of using an electronic control system. When they submitted their idea for a stand-up short-range commuter vehicle in Yamaha’s in-house Idea Contest, they won 1st Prize as well as the President’s Award.
Then in 2016, the official development project was green-lit and work on the first prototype began. The resulting vehicle won even greater praise and the decision was made to display the work-in-progress as a concept model at the 2017 Tokyo Motor Show.
“Yamaha has always tried to think outside the box of what constitutes ‘mobility’ and sought to create completely new products that contribute to society and the environment,” says a TRITOWN development project and product planner. “You can see this with the first PAS electrically power-assisted bicycle, the Passol and e-Vino electric scooters and the Tricity LMW model. The fact that the idea for the TRITOWN first won the Idea Contest and a development project aimed at commercialization was subsequently launched was not just because it was an interesting idea, but also because of its appeal on multiple levels, like how it’s an EV, that it doesn’t take up much space and because it builds on our LMW technology.”

Working Toward Creating a User-Oriented Product

After wowing visitors at its Tokyo Motor Show unveiling, the next step for the TRITOWN was to get the average person to try actually riding one. But that would entail a number of high hurdles to clear, from product safety and durability to adjustments and optimization for mass-production. “In the end, we kept only the basic structure of the concept model from the Tokyo Motor Show and redesigned everything else,” says the TRITOWN’s chief chassis engineer. “Part of that included looking at the wheels, tires, brakes and the like to find substitute bicycle parts that are easier to procure.”
It was also during this period of redesigning the vehicle that the idea of riding it standing up with no seat was also under reconsideration. “The concept we submitted for the Idea Contest was for an agile vehicle that could cover the roughly 1 km up-and-down route from our dormitory to the company easier than a bicycle,” he continues. “Sure, giving it a seat would open up the audience of target users, but there was also a real chance that it would take away from its natural handling feel or its capability to remain upright when stopped. So, we prioritized staying faithful to the original concept and focused on refining its viability as a product.”
The result of the team’s work is the version being used for field testing in this issue’s feature photo. Its prototype was first exhibited and demoed in January 2019 at CES in the U.S. Then, for a roughly month-long period beginning in late-April, field testing with the general public (open to people aged 16 to 70) was conducted for the first time on the grounds of a leisure resort near Yamaha Motor headquarters in Japan.
“People could rent the TRITOWN for an hour,” explains the development project and product planner. “Each user was first given an explanation of the vehicle and some basic riding practice that took about 10 to 15 minutes. Then they were free to ride through designated areas of the resort, and most of them rode it around for the full hour. This test gave our team a lot of different opinions and data. Male users mainly commented on the product itself like its performance and the ride, while female user feedback had a more emotional angle, like what felt good while riding it or how they enjoyed the scenery more while on it. These responses were exactly what we were aiming for with the TRITOWN’s dual-faceted character and gave us confidence for our next steps.”
The second field test is being run from mid-July to mid-August at Echigo Hillside National Government Park in the city of Nagaoka in Niigata Prefecture. Here, the test is being run in a paid guided tour format, using the TRITOWN for about an hour to see the park. “While we chose an environment suited to more active riding for the first field test, this second test is more about taking in the scenery and feeling the wind while also enjoying conversation with others on the tour. It’ll be interesting to see how this changes the responses we get from the users. I’m certain we’ll be able to get a wide range of feedback covering not just the product but also know-how for running the tours and more,” he concludes.
If it is for use in closed areas like resorts or other recreational facilities, the day we see the TRITOWN being used as a complete product may actually be closer than we think.

From left: the concept model introduced at the 2017 Tokyo Motor Show; the model exhibited and demoed at CES 2019, the world’s largest consumer electronics trade show; and the model used for general public field testing in 2019. 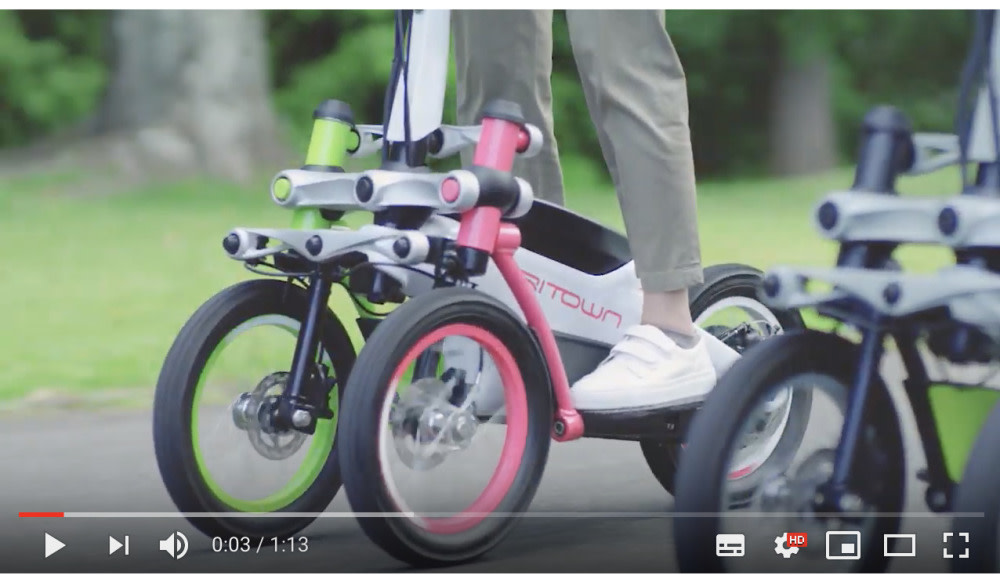