Net sales were 290.4 billion yen (an increase of 30.1 billion yen or 11.6% compared with the same period of the previous fiscal year) and operating income was 19.9 billion yen (an increase of 11.3 billion yen or 131.5%).
With motorcycles for developed markets, unit sales in Europe fell due to supply delays from a shortage of shipping containers, but unit sales, net sales and profits grew overall thanks to continued growth in demand stemming from the booming outdoor and family recreation sector seen mainly in North America.
For motorcycles in emerging markets, unit sales increased everywhere except Indonesia, where the impacts of COVID-19 remain significant. Unit sales in Thailand, Taiwan, China and Brazil have recovered to levels on par with the first quarter of 2019. As a result, sales and profits increased accordingly.
Production of recreational vehicles (all-terrain vehicles, recreational off-highway vehicles (ROVs) and snowmobiles) has fallen behind in response to the robust demand due to a parts shortage, but the ongoing growth in demand for outdoor and family recreation since last year resulted in higher unit sales and thus greater sales and profits.
Sales and profits with electrically power-assisted bicycles increased due to continued strong sales of complete bicycles in Japan and E-kits for Europe.

Net sales were 97.5 billion yen (an increase of 6.8 billion yen or 7.4% compared with the same period of the previous fiscal year) and operating income was 19.3 billion yen (an increase of 3.8 billion yen or 24.3%).
Demand for outboard motors in North America and Europe is steadily rising with the boom in outdoor and family recreation. We were still greatly affected by the delays in ship loading due to the global shortage of containers and shipping suspensions seen in the beginning of the year, but thanks to reinforcing supply with greater production volume as well as the production adjustments made last year, unit sales increased. Steady parts sales also contributed toward higher overall sales and profits.

Net sales were 27.1 billion yen (an increase of 9.3 billion yen or 51.8% compared with the same period of the previous fiscal year) and operating income was 3.1 billion yen (the same period of the previous fiscal year recorded an operating income of 0.3 billion yen).
Continued strong demand for capital investment in Asia (including China, Taiwan and South Korea) drove unit sales of surface mounters up significantly, resulting in much higher sales and profits overall. The operating deficit for Yamaha Motor Robotics Holdings Co., Ltd. was also narrowed.

Net sales were 11.3 billion yen (a decrease of 0.6 billion yen or 5.0% compared with the same period of the previous fiscal year) and operating income was 4.7 billion yen (an increase of 3.4 billion yen or 256.4%).
Strong retail sales and product supply delays caused a substantial drop in market inventory and this drove down receivables for wholesale sales, resulting in lower net sales overall. However, a decrease in the allowance for doubtful accounts and an increase in income from retail financing led to higher profits.

For the full fiscal year ending December 31, 2021, there will be various effects from the strain on logistics and distribution, the shortage of semiconductors and other parts, soaring raw material prices and more, but we expect the current favorable business environment for our businesses in developed markets, the motorcycle business in emerging markets and the robotics business to continue.
In addition, upon reviewing our currency exchange rate forecasts for the second quarter and onwards, we have revised our forecasts for net sales and various incomes as shown below. Note that this forecast does not reflect the effects of global lockdowns due to the rising spread of new coronavirus variants. 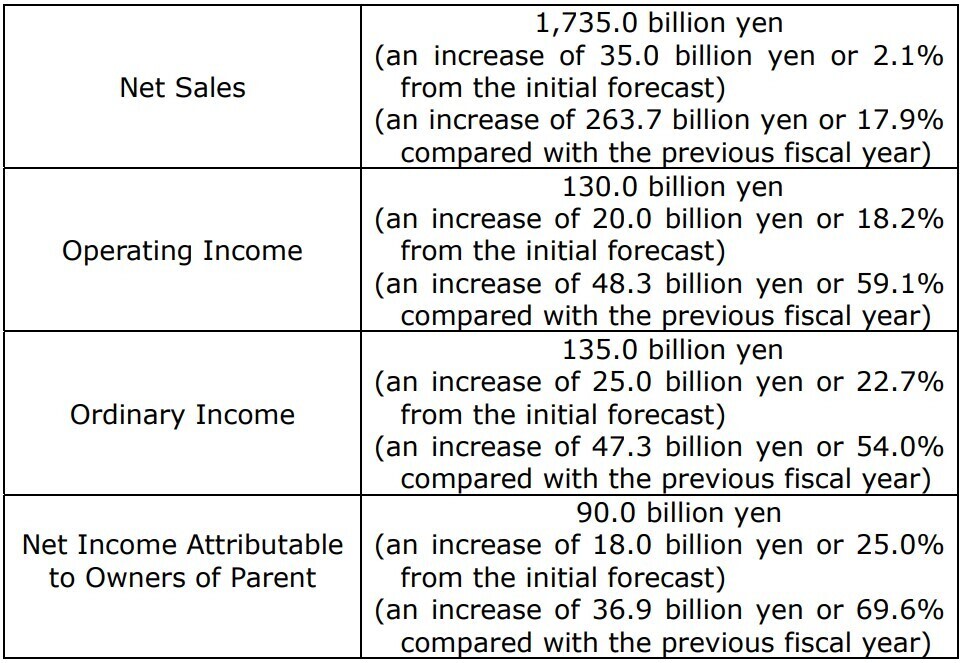